The Backdoor to a Dystopian Nightmare 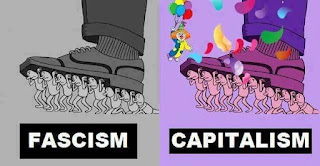 Way back in the early 1980's I remember watching Carl Sagan giving a hypothetical lecture on the nature of other intelligent species. Several of the illustrations he used on that episode were like cheat cards or cliff notes on various aspects that made up those hypothetical aliens and the nature of their civilizations.

Most of the made up “facts” on these cliff notes dealt with the chemical, biological, and physical nature of those species. For example one of Carl's fictional species were “electrovores” implying that they consumed electricity to sustain life. I can't describe how that concept blew my little mind, and still does. These cliff notes were included in the companion book to the series and if you have a copy of Sagan's Cosmos they're still fascinating even today.

Now Carl included a cliff note on humanity, listing the same information on it as the others. And like the others there was a short segment giving some details on our civilization. Mainly that the species was divided up into over two-hundred political entities, six global powers. In this same section it was mentioned that cultural and technological homogeniety was underway. In other words, the “intelligent” species of the planet was undergoing a type of global unification.

On a side note, in the same section our chances for long-term survival were also mentioned at less that fifty-percent per hundred years. Given the nature of the Cold War at the time and Carl's fixation on it as a threat, there was only the smallest mention of the destruction of the planet's biodiversity or climate change.

In the last few years my attention has drifted back to the homogeniety of our civilization. Forgive the implied American imperialism, but for years I didn't have a problem with the world more or less unifying into something like a United States of Earth. That is, a loose global federation made up of self governing political entities whose underlying framework revolved around democrat values and egalitarian principles.

My vague notions of global unification were essentially the ideals of a center-left vision of no person or group having a codified or economic advantage over anyone else. Inequality would exist with some being richer and some being poorer, but that the national and global institutions would attempt to referee the playing field and work to give a hand-up to those born disadvantaged.

Of course, the Cold War ended with a total crash and burn for the only other economic system that seemed a viable alternative to the wrestling tag team duo of democracy and capitalism. Okay, let me go ahead and clearly say I am not here to praise communism, it's dead and has dissolved into a stinky dust.

On the other hand in the years since the end of the Cold War, the tag team duo of democracy and capitalism has broken up with the latter now a legitimate threat to the former. It's a problem all over the world but particularly here in the United States the amount of money in a person's bank account generally means he or she are more equal than another with less money.

The situation has gotten so bad some of these rich folks openly talk about having more votes for elections than us common folks because they have more invested in society. Then there is this Republican/Libertarian fixation that corporations should be considered “people.” From what I learned that only was suppose to mean that they could be sued in court, not hold some position of power in society or representation in government.

This brings me to a concept that I had long since recognized but didn't have a solid idea about until I discovered a book by the British cultural theorist, Mark Fisher. Fisher had coined the term“Capitalist Realism” defining it as the widespread belief that capitalism is not only the only viable political and economic system but that it also now impossible to imagine a viable alternative. That since the fall of the Soviet Union this lack of an alternative to capitalism has a set a limit to political and social life with the effects reaching into education, mental health, and even pop culture and methods of resistance.

So you might be thinking just what does this all mean and how did the collapse of a discredited and evil system like communism screw over the liberal democratic world?

Well, it should be easy to realize that economic inequality all over the world, but especially here in the United States has grown considerably since the end of the Cold War. That this ties in nicely with the collapse of the labor movement here in the United States. Labor unions being the one strong and dependable counterweight to the power and influence of the rich elites who all always looking for ways to increase profit, even at the expense of the dignity and lives of their workers.

With capitalism looking like the only viable alternative anything that even slightly differentiates from philosophy of increasing profits begins to smell like communism. Remember folks, good old capitalism of the late nineteenth century and early twentieth didn't have a problem with sending kids younger than ten years-old into dangerous factories and mines.

I think maybe the most insidious thing about Capitalist Realism is its effect on pop culture. Going real loosey-goosey here but since we've been left with no real alternative everything in our society seems to be viewed in a monetary value. Fisher writes:

Capitalist realism as I understand it ... is more like a pervasive atmosphere, conditioning not only the production of culture but also the regulation of work and education, and acting as a kind of invisible barrier constraining thought and action.

My takeaway being that as long as you can make a buck off something it's not only a worthy project but an admirable one. Take this idea to the extreme and I can see the justification of everything from driving up the price of insulin to outrageous prices and no-talent skanky publicity sluts making their fortunes selling sex tapes. (The Kardashians are the biggest but there have been others.)

The penultimate and most dangerous result has to be the belief that the government can be run like a business. That the privatization of essential government services can be beneficial saving the ever precious taxpayer from the burdens of having a decent society. Because of this mindset we now have for profit prisons where it can be argued that we have backdoored a return of slavery. Yes, the inmates have committed crimes against society but to use them in commercial ventures that make millions in profits for stockholders and CEO's is just “slavery with extra steps” to use a term from a recent television show I like.

In the long run the United States may have defeated the existential danger of Marxist-Leninist communism, but the price for the win was the soul of our society. Another way to look at this is that we have bought our way into a real dystopia. 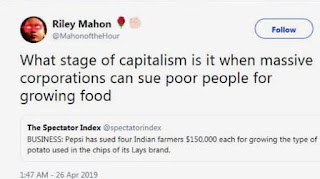 In all the anti-racism work I've been doing it's apparent to me that our system was set up by old white men for old white men, although as a white woman I do benefit. It's embedded in the minutest details of our society, and I'm starting to think that burning it all down is the only way we can fix it. Not that I want to give up my comfortable life...

I am a proud and active union member. I don't know if it solves all problems but I totally agree with you that it's an essential counter-weight. I would love to see a resurgence in the private sector.

It's really hard to feel hopeful about the world these days.

The Bug: On that old white man angle, I firmly believe that if we had forced retirement of politicians at 65 or 67 it would help the nation. Now there are some good people in politics who are in their 70's, but younger minds with fresher ideas would help.

Armchair Squid: It is truly diabolical how much effort the republicans have pushed to destroy labor unions.