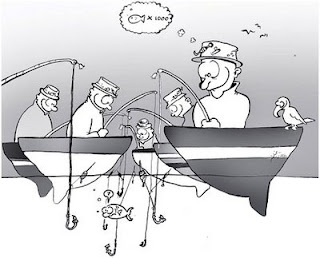 Back in the 80's I caught an interview Larry King had with Ted Danson, who despite his best intentions hurt the environmental movement by declaring with a near fanatical look that the oceans would be dead in ten years. Danson brought up the killing of sharks, pollution, mega-sized factory ships overfishing, and other very real issues. I can't tell you how many times I have heard some conservative nut bring up that interview saying that its been way over ten years and the oceans are still there. Never the less. despite the snickers and the good old boys and girls slapping each other on the back reassuring each other all this is crazy liberal crap a very real problem does exist:

About 70 percent of the world's fisheries are over-exploited or have already crashed, the report said. If this long-term trend continues, scientists have predicted that all current salt-water fish and seafood species will collapse by 2048.

I guess Cheney's back was still hurting from lifting those boxes last month when he couldn't stand during President Obama's inauguration. But on second thought if Cheney could easily shoot a "friend" in the face what would he do with this crowd?

Excuse me if I get all preachy but there is another issue here for me. I fully realize that not everyone is cut out for the military. As much as the recruiting advertisements might like to suggest at times that serving is a great job, it is not. Serving in the military is a very difficult lifestyle that stresses the strongest of individuals and can easily destroy the best marriages.

But I find it bizarre as Hell when non-serving chickenhawks, both in the public eye and private life, go around carrying weapons acting like the mighty hunter, Rambos expecting doomsday with an AR-15 in the closet, or as armchair generals who after hours of watching the Military Channel while munching on pork rinds figure they could have any war wrapped up in days . It has been my experience that at best these people offer only stale platitudes to those men and women who for some reason actually signed their name and raised their right hand to defend this country.

As for the rich and powerful, college deferments or in the past a convenient rearrangement of National Guard waiting lists allowed them to sit out the wars they now so eagerly rushed others off to fight in. As for the Rambos sitting at home with an assault weapon nearby and the armchair generals who just can't understand why some have misgivings about torture I've heard many an excuse as to why they ain't out chasing down bin Laden themselves. Except for the odd individual with a legitimate reason for not joining all the others are a laugh riot. 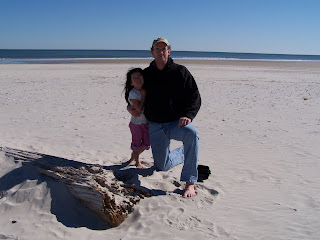 between two people trying to escape loneliness that both would be far better served for companionship if they just bought a dog.
--BEACH BUM
Posted by Commander Zaius at 9:00:00 PM 18 comments: