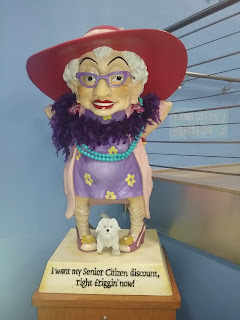 Truth be told my wife and I underestimated the time it would take us to get to  port of Fort Lauderdale so we could get on the cruise ship. Having traveled to Disney World more time than I can remember we both assumed the traffic would be about the same as I-4 going into Orlando, It wasn't.

A little south of Vero Beach traffic got heavy and only got worse as we got closer to Fort Lauderdale. In fact it took us close to two hours to drive between Boca Raton and Fort Lauderdale itself. By the time we reached the motel would stay Friday night, we were both quite stir crazy from the drive. Long story short, I'd advice everyone to consider flying to Fort Lauderdale if the alternative is a long drive.

The motel we stayed at that night before we got on the cruise ship was an interesting adventure in its own right. My guess was that it was built in the 1980s and had gone through several cycles of decline and haphazard renovation. I would describe it as having a clean but but well-worn look which catered specifically to travelers like us who were about to board one of the many cruise ships based out of the Fort Lauderdale port. The one slightly funny aspect of that motel is best typified by the picture in the upper left.

Like many other motels these day, it offers a free breakfast for its guests. So when my wife and I stepped into the room just off the lobby to join in for the morning meal, I found it overrun with cranky blue-hairs all scrambling for those free waffles, bagels, and small cups of orange juice. While none of these irate Boomers said a word to me, I'm over six-feet tall and with a normal facial expression Clint Eastwood would find intimidating, it was fun to watch two gentlemen squabble over just who was going to get the last boiled egg inside the motel refrigerator. 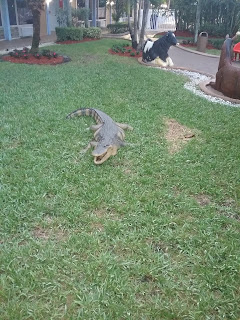 After "breakfast" there was still time to kill before we could head over to the Celebrity Cruise line port terminal. So I walked the motel grounds just to explore. The alternative being sitting in the buffet lounge as my wife drank coffee and looked at her phone.

Got to admit, that motel did work hard at making their pool area something close to a playground/garden. It had nicely landscaped grass sections with plenty of foliage giving it a tropical feel. Being early morning I did about shit my cargo shorts when I saw this in one of the landscape islands. Being Florida, you can't ever really play it too safe when it comes to encounters with alligators.

No, don't anyone go all nature expert on me, I know alligators are not naturally aggressive. Its just that you don't walk up to one like you do a friendly dog wagging its tail. That replica looked crazily real and it took me about a minute to be sure of that. Yes, I saw the cow behind it and instantly knew it was not a living bovine but remember, that was Florida. 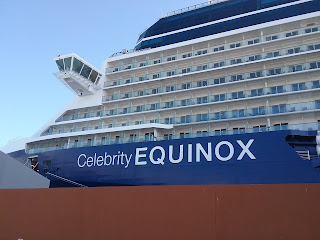 Yes, we eventually made it to the port to begin the process of boarding the amazing Celebrity Equinox. Not before checking out of the motel where my wife for some reason began telling a long drawn out story to the desk clerk about how bad the traffic was in fort Lauderdale.

While she related every microscopic detail to the befuddled clerk who obviously didn't care one nanogram, I was doing my best get her to the car. The one thing about the desk clerk, the guy looked exactly like a young version of Desi Arnaz and I found myself fighting the urge to scream out, "Lucy, you have some 'splainin to do." Yeah, I know that reference puts be ever closer to joining the blue-hair crowd. 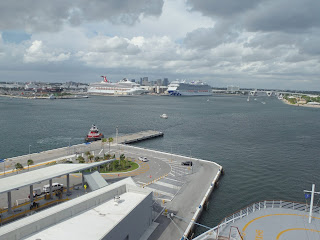 After getting to our cabin and dumping the luggage, we did a tour of the boat with me taking pictures of everything that moved. Fort Lauderdale port is not some huge expanse, I found it quite tight with all sorts of ships entering and leaving with only a few meters to spare between them. 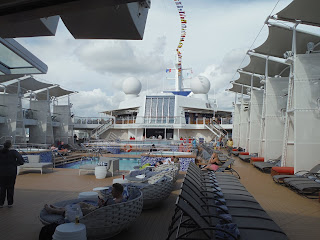 One of the items I found curious when we boarded were these folks already enjoying the outside pool. My wife and I really literally in the first group of twenty people to board the Equinox but they were clearly in heavy relaxation mode with the pools bars open. I was later told those people were doing double cruises having already spent a week living the high life. 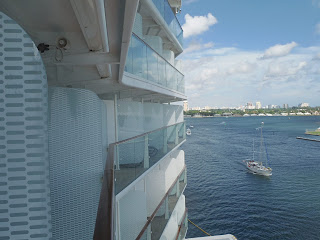 The view looking towards the bow from our cabin veranda. 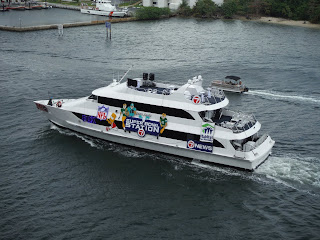 Not sure what was the deal with this yacht, it was obviously part of some local television station promotion. Half expected to see some hulking football player and his supermodel, bikini-wearing girlfriend hanging out on deck while sipping drinks, but no luck. 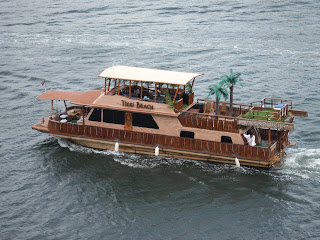 Obviously a party boat, would be interesting to hear some of antics that occurred on it. 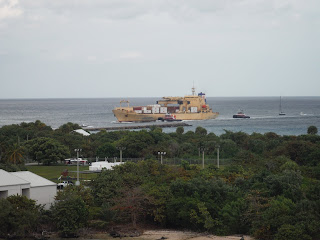 A Dole freighter coming into port. That ship passed by the Equinox so closely I could smell the fumes coming from what looked to be an open hatch leading to the engine room. Not a big fan of Dole products given what the family did to Hawaii back in the late 19th century. 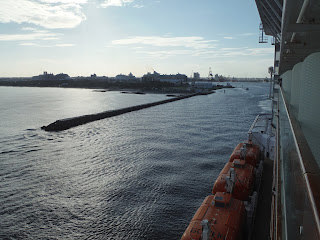 Parting shot of Fort Lauderdale with the Equinox heading out into the Atlantic. 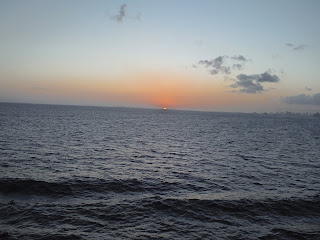 As the day progressed everyone onboard began settling in and relaxing. Caught this shot of the sunset just outside the coffee bar. Given my condition I rarely even drink de-caff coffee but that didn't stop my wife.
Posted by Commander Zaius at 9:47:00 AM 10 comments:

Back from the Cruise 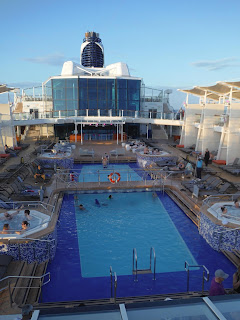 Well, my wife and I got back home from the cruise late yesterday evening. The drive up from Fort Lauderdale took a little over ten hours and was exhausting. The traffic going north on I-95 was tough but it wasn't as near as bad as the insane number of cars going south. I-95 heading south through South Carolina was bumper-to-bumper and literally crawling at times.

When my wife and I arrived home we dropped our luggage on the floor and went to bed. It's early evening Sunday now and we're still getting organized. So here's a few pictures from the trip with a lot more to follow.

We were on the Celebrity Equinox and the first picture is of the outside pool area looking aft. A much bigger pool than I have seen on other cruise ships. 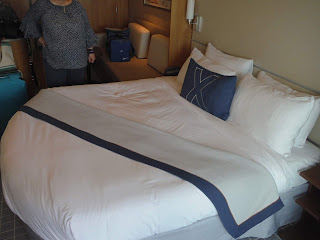 This is a bad picture of the cabin. Can't really see the rest of space because my wife got in the way. It was around 190 square feet and was the nicest cabin we have ever stayed on any cruise. 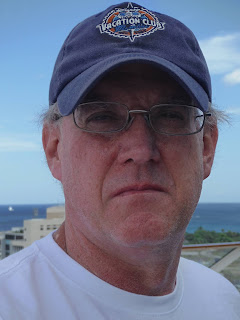 This ugly son-of-a-bitch had an absolutely great time on the cruise. He had one little bout of seasickness involving a ferry boat taking him from the island of Cozumel to the nearby Mexican mainland. His group was going to see the Mayan ruins of Tulum and while to the trip to the mainland had no issue, the seas going back to the cruise ship were brutal.

Got to start getting ready for work tomorrow, so I'll post more over the next few days.
Posted by Commander Zaius at 5:43:00 PM 11 comments: 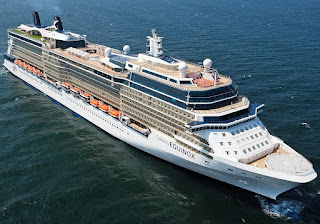 When my wife unexpectedly announced about two months ago that she and I would be going on a cruise I was excited to say the least. Our last Disney Cruise was way back in 2011 and I had begun to doubt we would ever go on another.

The stupid kid in me was really happy when she said we were not going to take any of our children with us. Our college graduate son is 24 years-old and now has a real job, so that was a no-brainer. I couldn't imagine him even wanting to accompany his aging parents onto a cruise ship filled with married couples with young kids or older folks like my wife and me who are both hardcore Disneyphiles. Putting it bluntly, you simply do not see single, unattached people going on Disney cruises.

Single parents, yes, in fact they have special programs for the adults so they can enjoy the trip as well as the kids. But if you do see an unattached adult on a Disney cruise, something has seriously gone sideways for that person. The best example being our 2003 cruise on the Disney Magic when word got around that the thirty-something guy by himself had been left at the church altar by his wife-to-be.

But even our high school senior daughter is going to be staying home on this trip as well. There is good reason being that her Christmas Break does not start until the cruise is well underway. She has dreams of going to some pretty fancy universities next year and needs to pay special attention to her grades. I'll make a terrible admission, I'm glad the trip will just be my wife and myself.

What really surprised me though was when my wife told me we were NOT going on a Disney cruise. That I would not be hanging out with my personal god, Goofy, or ogling any of the attractive young women playing Disney princesses onboard. Something I need to be careful about after slightly and accidentally groping Ariel during a character photo-shoot years ago. Hey, I have long gorilla-like arms and Ariel told me to come take a picture with her and my much younger daughter.

After a stern warning by Disney management, I promised never to bother the princesses again.

This seven day cruise will be on the Celebrity Equinox with stops at Key West, Cozumel, Grand Cayman, and one other place I can't remember. Not sure about the Celebrity Cruise line but whining about it is the definition of ridiculous First World problems. So I will not be looking this gift horse in the mouth.

Taking the laptop so there will be numerous pictures. Try not to hate me when I post pictures of me in Key West eating a slice of Key Lime Pie. We'll be leaving for Florida early Thursday morning and boarding the ship on Friday.