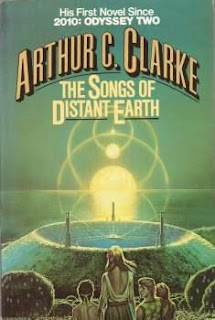 Way back in the 1980's and earlier, scientists researching the tiniest bits of matter in existence were freaking out over the fact that our sun didn't seem to be producing enough of ghost-like particles called neutrinos as it fused hydrogen into helium. The details are messy and uber-complicated, so trust me it was a huge deal for the guys and gals who study physics. Two important items you have to understand is that neutrinos could literally pass through trillions of miles of lead and very rarely interact with the atoms that make up such an implausible structure. The second, is that we now know that there are more than just one type of neutrinos, so the problem has long since been solved.

For science fiction writers back then the missing neutrinos were something they couldn't let slip through their collective fingers. A minor sub-genre of stories came about explaining why our sun seemed to be abnormal. The best of these works is a novel called The Songs of Distant Earth by Arthur C. Clarke.

In the novel somewhere around our current year, particle and stellar scientists realize that because of the Sun's missing neutrinos it will go nova in a couple of thousand years. To put it simple terms most Americans can understand, in the novel the scientists discover the sun will explode destroying the Earth. At first this news is mostly ignored, people have bills to pay and it's extremely hard to get anyone to think ahead six months in the future, much less two millennia. Still though, with the Earth under an unavoidable death sentence the only question was what would be Humanity's eventual response.

Before we go any further you have to understand how Arthur C. Clarke liked to write his novels. While most sci-fi writers would have just turned to outlandish technology like faster-than-light propulsion or massive multi-generational starships for humans to escape the doomed solar system, Clarke liked to base his works on real science. For him that meant nothing that violated the known laws of physics nor concepts that were implausible because of their massive engineering. Despite countless speculative theories there is very little in the way of real science that suggests our species will ever exceed the speed of light. And while sub-light manned starships are theoretically possible, the extra mass such constructions would require to support humans traveling the distance between stars makes them highly implausible. It boils down to having enough fuel to accelerate to a decent percentage of light speed and then enough to slow down and stop at the destination.

In The Songs of Distant Earth, Clarke get around these problems by having humans send out unmanned robotic starships loaded with frozen embryos who are thawed out and developed in artificial wombs after they reach their target worlds. After being “born” these kids are then raised by robots who go on to create their own civilization. Yeah, for those who don't read a lot of science fiction the idea of robots raising human children might seem unethical or maybe even immoral. But honestly, in reality I've seen some people who were so terrible they never should have been allowed to have children in the first place. With the rate both artificial intelligence and robotics are developing in real life, those technologies could very well mature to such a point that they would do a much better job with kids than their human parents.

So the centuries go by with hundreds, if not thousands, of seed ships being sent out with people back on Earth more or less content to know the human race with carry on even after the planet becomes a deep fried rock. One of those seed ships settles on an ocean world with only scattered islands the human inhabitants come to call Thalassa, and that is where most of the story takes place.

The people of Thalassa go on to develop a Jimmy Buffett dream of an easy going society that doesn't really rush to do much of anything. So when the island where they built the radio telescope to keep in contact with Earth and the other colony worlds is destroyed by a volcano, there's no hurry to rebuild. After a few decades of silence, the other human worlds begin to believe the colony on Thalassa was wiped out as well.

Now back on Earth as the seed ships are leaving, rigid population control has not only massively reduced the number of people living on the planet but they are enjoying an unbelievable lavish lifestyle because there is more of everything to go around. This abundance of resources at least partly translates into massive scientific research, and this is where Clarke comes close to violating his own ban on impossible technologies.

If any one theory of the twentieth century threw reality for a loop it was Quantum Mechanics. QM deals with subatomic particles, such a those missing neutrinos, but that isn't even scratching the surface. Subatomic particles do a lot of wild and crazy stuff that seem to violate macroscopic physics and basic commonsense. Once again, it's messy and uber-complicated so instead of me confusing everyone with my bad explanations about QM, it might be best if you all just look up some educational videos on You Tube.

One of those crazy QM theories that Clarke used in the book involves the idea that the vacuum of space is not peaceful and empty but is a seething cauldron of particles popping in an out of existence. In fact the famous physicist, Richard Feynman, once said that one cubic meter of space at the quantum level has enough energy to boil all the waters of all the oceans on Earth. Once the scientists and engineers on the doomed Earth figured out a practical way to use this information, they could now get around the fuel issue with manned interstellar travel and get to building actual starships-- though still slower than light. The trouble with this discovery though was that it took place a little over a hundred before the sun would go boom.

But the people of Earth did have time to build a few true manned starships. Funny thing, while discovering a way to build ships that could approach the speed of light, the engineers soon realized that another issue would keep them from coming close to that speed. See, interstellar macroscopic space is “filled” with with debris that ranges in size from lone atoms of hydrogen to various rogue planets that were flung out from the star system where they were formed. While these starships could detect the big stuff and slide out of the way, the atoms and other smaller rocks and stuff could literally destroy these fancy vessels. Confused? Look up Newton and his equation on how force equal mass times acceleration.

But the engineers decide to build an ice shield at the nose of the starships, which partially solves the problem. But they still have to limit the speed of these ships to around ten-percent of the speed of light. And as you might be able to figure out, these ice shields wear down after so many years of traveling through deep space.

Enter the starship Magellan and its hundred-thousand or so hibernating humans, who after two-hundred years of travel need to stop and rebuild its now thin ice shield. It just so happens that he ocean world Thalassa is the midpoint on their journey to their eventual destination. Needless to say both the humans from the now dead and roasted Earth and the native Thalassans are quite surprised to see each other.

The actual meat of Clarke's novel comes with how the two groups interact with each other. An important note Clarke hints at several time for the reader is that human history is filled with how stronger cultures overwhelm and destroy weaker ones. So both groups initially tiptoe around each other in an effort to play nice.

Before long several reawakened but weary members of the Magellan's crew become entangled with native Thalassans, for whom emotional and sexual relationships are free of the possessiveness which are normal to us. More importantly, as the crew of the Magellan builds the ice plant on the surface of Thalassa to replace their ship's worn down shield, they discover that a scorpion-like species living underwater that is well on its way to being a sentient species. This scorpion-like species is actually native to the planet opening up uncomfortable questions about how the human Thalassans will learn to live with them. These scorpions have massive underwater villages and farms and like to obtain metal to build things from human constructions that stick out into the ocean. One more thing, the scorpions are only semi-aquatic and can spend a great deal of time on the surface.

What attracted me to this book was the deep time aspect of human development. While only set in the 3800's AD, The Songs of a Distant Earth reminded me that our personal existence, culture, and civilization are temporary creations which will be replaced at some point. That maybe a better objective for Humanity might be working to build something that improves what we have now for the benefit of our descendants.

I give nothing away by writing The Songs of Distant Earth ends on the duel notes of both hope and tragedy. While I obviously loved all the hard science in the book, the strength of the novel is, of course, how the characters deal with each other. After centuries of separation, the Earthers and human Thalassans have much to overcome in the way cultural differentiation. While Arthur C. Clarke didn't get as deep as I would have liked in human tension, it is still a remarkable work.
Posted by Ryland Grace at 8:34:00 AM 10 comments: 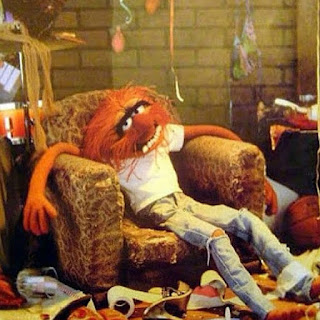 Realizing uncertainty is one of the few universal constants, I'm taking this moment to write that I should be returning to regular posts by this weekend. Yes, my cardiac adventures have continued with two trips to the emergency room and another ablation procedure, which occurred last Thursday. This last one had the benefit of not seeming like total Hell. The whole story of my last two emergency room visits and the latest cardiac ablation are far to long and complicated to write about in the time I have right now.

Unfortunately, what I can relate is that while the good doctors and nurses did nail down several more trouble spots on my heart, there was one they couldn't zap and destroy. In fact, I was told it would take open heart surgery at another hospital in Chicago. Everyone involved, which naturally includes me most of all, hopes that my medicine can keep that bad boy under control. Yes, there are other options like implantable pacemakers and defibrillators but I really do not want to go there.

If brevity is the soul of wit I'll stop now because it actually looks like I summed up the situation pretty tightly without all the awkward social oversharing. Here's hoping that I am no longer living in medical interesting times to paraphrase what I think is an ancient Chinese curse.
Posted by Ryland Grace at 2:50:00 PM 11 comments: