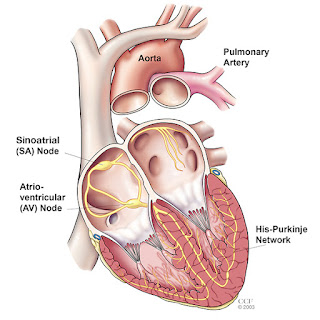 More news on the cardiac front for me. For those unlucky enough to stumble upon this post for the first time back on August 1st 2018 my heart suddenly went into ventricular tachycardia launching me into a cardiac adventure that didn't end until December of that same year. Unfortunately, I didn't come away free and clean. Turns out I possess a genetic defect that prevents my heart cells from producing, or correctly producing, a protein vital for proper function.

Four cardiac ablations, two different types of pacemakers, and a whole spectrum of different medicines later I have fought this condition to a standstill. That is until February of 2020 when I started being plagued with atrial fibrillation, or A-Fib for short.

Now A-Fib isn't as dangerous as tachycardia, and as one of my doctors likes to tell me people actually “live” with it to the degree it's effecting me. But A-Fib sucks high balls, especially since I live in a place that is hot and humid for a larger portion of the year as compared to being cool and pleasant. Besides sucking the energy to do any activity from my body, A-Fib would also send it into full-fledged flop sweats. So much that a few people actually stopped me in the hallways or my work and ask if I was okay.

Well, back in April I had a simple procedure called a cardioversion where my Columbia-based doctor shocked my defective heart out of A-Fib. It worked, at the time, and I felt great and went about my business. That is until the middle of July went my goddamned heart casually went back into A-Fib. Being deep into the summer at the time, at first I just thought the heat and humidity were taking its toll. That is until the first of August when the dipshit asshole- and I truly mean that- scheduler for my cardiologist in Columbia called to tell me that the doctor really wanted to see me “as soon as possible” but that his first available appointment wasn't until the end of that month.

“Huh...wait, what?” I said only thinking that my appointment with that specific doctor wasn't supposed to happen until the middle of October. The scheduler, being a dipshit asshole quickly cut the call leaving me wondering what the hell was going on. So I called back the next day with the intention of getting an appointment with the cardiologist's physician assistant or nurse practitioner, someone who I'm on better terms with than the Columbia cardiologist.

No, the scheduler went full prissy asshole acting like my request was done just to shit in his morning cornflakes. Still feeling like shit and wanting some answers before the end of August I make another phone call to the Advanced Heart Failure Clinic, a separate practice in the same location, and still got nowhere.

So instead I called the cardiologist down in Charleston and got an appointment just a week later. The Charleston cardiologist didn't waste time and promptly ordered another cardioversion that day upon seeing me. It was quite the surprise actually since I expected him to just kick the can down the road.

I was A-Fib free until September 8th went my heart again casually went back into it. Now I'm looking at a cardiac ablation, my fifth, scheduled for November 3rd here in Columbia. I'd rather have it with the Charleston cardiologist but it's easier on my family to have it here and from all my best information ablations of A-Fib are for more simple than the ones for ventricular tachycardia.

So if anyone out there was wondering what happened to me I simply didn't have the energy to try and dazzle you with my brilliance, or more accurately baffle you with my bullshit.

I'm still going to work during the week and performing the absolutely minimum in outside chores. That latter part isn't affected by the A-Fib, I just don't give much of a rip about the yard work.

As for the November 3rd ablation, hopefully the Columbia-based cardiologist will nail down the bad spots in my heart the first time. He screwed up on the first ablation back in August 2018 and his three others didn't relieve me of the tachycardia. It took the Charleston cardiologist to nail down the life threatening spot on my heart.

Unfortunately, my genetic condition means my heart will continue to be a dick for the rest of my life. Meaning I will continue to live under the threat of things like A-Fib and tachycardia as well as Cardiomyopathy. At least I have health insurance and access to several top notch doctors down in Charleston.

Yes, a heart transplant is a possibility but I don't want to think about that until I absolutely must.

Email ThisBlogThis!Share to TwitterShare to FacebookShare to Pinterest
Labels: I give up, WTF!
Newer Posts Older Posts Home
Subscribe to: Posts (Atom)