The Wisdom of Frank Underwood 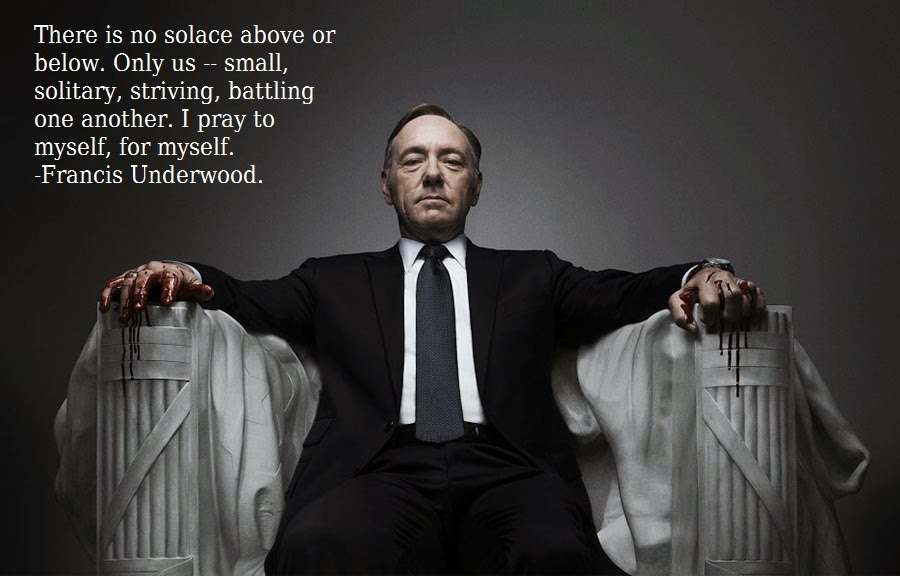 Despite the ravages of an ongoing and troublesome gravity storm at work last Friday morning my butt was situated comfortably in my easy chair to begin a totally disgraceful bout of binge watching the second season of “House of Cards” on Netflix. By the end of last weekend I had watched the certainly immoral, if not an outright sociopath, character of Francis “Frank” Underwood, played by the talented Kevin Spacey, skillfully manipulates his way to the very pinnacle of political power here in the good old United States of America. Unfamiliar with Frank's political adventures in a very fictional Washington DC? I will gladly give a basic synopsis without spoiling either the first of second season.


At the start of the first season Francis Underwood is a white, Democratic congressman from South Carolina. Okay, I admit that itself is next to impossible for reasons many will understand but lets just suspend political disbelief and go with the presumption that we are entering a parallel universe where absolutely none of our elected officials exist. With that out of the way, Francis Underwood is an ambitious politician with an above average ability to manipulate those around him. He is married to an equally Machiavellian Claire Underwood who in some ways is more terrifying than her husband. Frank can at least smile at his victim as he plunges a long and sharp knife into their backs. Claire, played by the lovely Robin Wright, carries herself with an aloofness and subtle contempt for nearly everyone she encounters who is not directly useful to her.


Despite both engaging in affairs the other spouse mostly ignores they are truly devoted to each other in a way that at first seems bizarre. This is because their true love is the acquisition and use of power. Now this is no real sin, strip away the occasional idealistic politician truly dedicated to improving the world and humanity and the more numerous but still rare pragmatic politician who will do what his right as long as it lets them keep their comfy jobs Frank and Claire are, in my opinion, refreshing examples of Washington honesty.


Where things head off into fantasy is that the two are usually able without much difficultly to push people and events into the exact direction they want. This neat talent can be compared to that of a puppet master pulling the strings on some soulless marionette or a chess master maneuvering game pieces into proper positions. The trouble is that despite Frank's obvious intelligence in reality people, even the stupidest Washington politicians, are never so easily controlled. I guess the very fact that politicians, even those lacking sufficient IQ points to properly ties their shoe laces, seem to have arrogance encoded in their DNA makes controlling them even more problematic.


This brings me to my two main points. The first being that there is an unhealthy delusion here in America, which crosses the entire political spectrum from right to left, that it only takes one smart and determined leader to reshape the character and course of the nation. In essence, the members of both parties are looking for an honorable and patriotic Frank Underwood.


The average right-winger dreams of nothing but the Second Coming of Reagan, or at least someone worthy enough to be his successor who will single-handily end welfare, defeat all America's enemies, create a business utopia, and limit government to a few choice duties. The average leftie has his or her own desire for a progressive Frank Underwood who will usher in an era of radical change creating their own dreamed about social utopia.


At least the lefties have three reality-based possibilities for their side. Bernie Sanders of Vermont , Alan Greyson of Florida, and Elizabeth Warren of Massachusetts are often mentioned as possible messiahs. Before anyone goes ballistic let me state that I think each of them would make fantastic presidents, except for the fact that in all honesty I do not believe they could be elected. This country desperately needs an infusion of nearly socialistic-level progressive politics but at this moment too many Americans are either caught up in their own happy credit card fueled world or are willing fools for corporate interests to realize the United States is circling the bathtub drain.


Just on the off chance that one of those three was able to become president not only would they face a strident and fanatical opposition from the Republicans but most of the members of their own party who have long since sold their souls to the came corporate masters who control the GOP. But like I wrote, at least us lefties have reality-based possibilities, the odd and terrible collection of fools on the right vying for the mantle of Conservative savior have more in common with the sad inmates of an insane asylum.


My second point is one I have continuously blathered about almost from the time I started blogging. With the 2016 presidential election cycle gathering steam elements in both parties have already begun lamenting about the lack of some morally upright and true candidate that will swoop in and save the country. With the New Jersey Fat Boy probably mortally wounded the once proud party of Lincoln is once again left with the asylum inmates. This makes Hillary Clinton the candidate to beat and as you can guess members of the progressive caucus are already whining about how Bernie, Alan, or Elizabeth would single-handily solve all this country's problems overnight. They believe Hillary is, at best, spoiled goods and represents the same old tired and corrupt political machine.


Not to take a lesson from Frank Underwood but politics is the art of the possible. A progressive savior would be fantastic but I have to classify such an animal along the same lines as Bigfoot and Little Green Men from Alpha Centauri. Both are possible but until evidence can be found supporting their existence, unlikely. What I have learned from Frank Underwood is that politics is a bloody sport that unfortunately eats the innocent and the inconvenient. This is where the “People” are supposed to keep watch on their elected leaders and be willing to quickly end the political careers of those who forget they are in office to serve the greater good. Instead the People generally act as sheep being led to slaughter as politicians play to our fears and prejudices. You want real change? Stop blaming the politicians for being weak kneed and spineless because they are just reflections of those who put them in office.
Posted by Commander Zaius at 9:53:00 PM 8 comments: 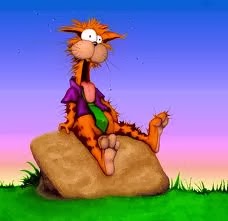 Please excuse, as for what is to me, a prolonged absence from making any blog posts. Suffering through a rather heavy gravity storm at work resulting in very little mental energy left when I get home for anything more intellectually strenuous than filling my cereal bowl, pouring some milk, and turning on the television. Which in many ways is a form of torture since morning television for me is a barren and surreal wasteland. It still bugs the hell out of me to channel surf over to the History Channel seeking something truly descriptive of their name only to be barraged with a marathon of one of the redundant reality shows they fanatically produce these days.

For this haphazard post I offer up the picture of Bill the Cat created by the famous Berkeley Breathed for his comic strips. The reason is that the fictional cat pretty much represents my current mental state. So until the situation clears I will leave you with his famous quote, “Ack!”