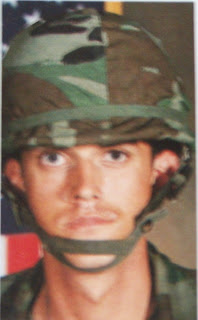 I barely remember taking this picture but I remember feeling very tired because I had duty all night before. Dear Lord, it hard to believe I was that young once.

"The whole world is three drinks behind" Humphrey Bogart

"When we remember we are all mad, the mysteries disappear and life stands explained." Mark Twain

The woman and the Corvette, but mainly the woman.

Back in August something caught my attention while waiting at an intersection and I would have loved to have been able to know the full story of what was going on. It was very hot and humid afternoon and I was returning home from picking up my daughter from her daycare. My son was also with us because his school had let out early that day. Traffic was very bad because we were returning home on a route that brought us very close to the only middle school in the local school district and classes had just ended.Urban sprawl had in just a few years turned Lexington from a quiet small town to, what seems, a cancerous appendage of the Greater Columbia area. Subdivisions have, and still are, multiplying like mushrooms or rabbits and as they have grown the local schools in the area have almost been crushed by the influx of new students. The intersection that we got stuck at was a crosswalk for that school and the crossing students prolonged the wait. Both of my kids were hot and tired because of the heat and they were already fighting in the back and I was just hoping they would not start flinging the milk shakes that I had bought them only a few minutes earlier at each other.It was at this time that I looked over to my left and noticed the three people at one of the local Chevy dealerships. The three were standing around what looked to me as a 2005 Corvette. The car was cherry red and looked so cool I could almost feel a breeze coming from that direction. The three people around it were a middle-aged man in a shirt and tie. A much younger guy who looked to be around 18. He was dressed in a sloppy polo shirt and a old pair of jeans. This guy had high school senior written all over him. The third person was a drop dead gorgeous young blond girl who curiously looked older than the high school kid but younger than middle-age guy. She was wearing very tight hip hugger jeans that highlighted every curve of her legs. Her second piece of clothing was a halter top that was not much bigger than a bikini top and I guess the color could be called pink or salmon. Her breasts were in a single word magnificent and I freely admit that I was so drawn to her that I found it hard to look away. Luckily, for me middle school kids were still streaming across the road because if not the cars behind me would have been seriously sounding off with their car horns.This gorgeous young woman had at one point sort of draped herself over the Corvette next to the cherry red one. As she was doing this middle-age guy and high school kid were engaged in a conversation that involved a lot of hand gestures between the both of them and jumping around done by the high school kid. As I watched all of this I asked myself several questions. Was gorgeous young woman high school kid’s girl friend or middle-aged guy trophy wife or was this the sister of high school kid and the daughter of middle-age guy ? Was this a job interview, maybe a first job for the kid or was this high school kid’s father going over the details about the new Corvette he was buying for his son? Gorgeous appeared not to be to involved in the discussion very much and continued to lounge on the other car looking so much like a center fold for some men's magazine. And I am sorry folks but I have to write that this young woman just oozed sexuality and looked to be enjoying laying across the other car in a very provocative posture.The discussion between high school kid and middle-age guy ended with high school kid being told something as middle-age guy went up to shake his hand and then he, high school kid, began jumping up and down like he had just heard that he had the lotto ticket with the winning numbers. Gorgeous got up off the car and began to follow both high school kid and middle-age guy as they walked off. Before I could see anymore traffic finally began to move and I had to drive off. I was able to drive past the same dealership several times over the next few days and I never saw the red Corvette gone. But at some point later the car did disappear but I have yet over these following months see it driven around town. And with as many choke points around this town I should have seen it at least once. The combination of the Corvette and gorgeous young woman has caused this little scene to be stuck in my head and I still hope at some point to see one or both around town.
Posted by Commander Zaius at 3:45:00 PM 5 comments: