A Bad Case of Disillusionment 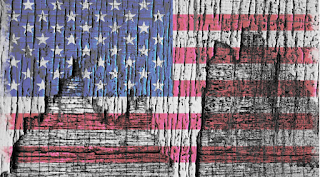 Got to admit, I'm dealing with a pretty big wave of disillusionment with the nature and behavior of the United States. No, this state of mind was not brought on by the Orange Buffoon, although he is more of a symptom of how things have gone wrong. No, I do not consider Joe Biden a failure, but events do seem to have moved faster than his administration has been able to anticipate. Long story short, things are still going to shit and I coming to think there is nothing the sane and rational people can do.

My one real criticism of President Biden is that he seems to be trying to play the normal game of American politics while Mitch McConnell and the rest of the Republican power structure have gone full kleptocracy/Authoritarian dictatorship. Giving the Son of a Bitch McConnell his due, the bastard has played corrupt politics like a master. All the while mouthing off asinine statements about everyone needing to respect the rules of the senate with a straight face.

If history ever needs a face to identify the individual who did the most to destroy the United States it will be Mitch McConnell. But I honestly can't say McConnell is the only reason for my disillusionment.

The majority of the people on the right of the American political spectrum are simply insane. Listing all the ways those people have lost their minds would take too long and I simply don't have the energy to rant about it anymore. Here's where I would normally say that I know there are good people on the right. But while they are out there, their numbers are vanishingly small to the point of insignificance.

My one sentence explanation for this situation is that right-wingers have become addicted to fear. They fear the “other” and want desperately a return to a white dominated America. They'll betray every facet of American ideals and principles to see that happen.

But never fear, the left of American politics is as usual lost and without a true game plan. To a far lesser extent, they are just as beholding to their money masters and their own antiquated behaviors. But given how American politics are run, they are the only reasonably sane people in the game.

Most of all, the young people of the country, those that will need to find the strength and knowledge to fix the problems seem adrift. From what I read, many have given up and surrendered figuring they will never be able to own a home, raise a family under the same conditions as their parents, or even retire.

Still rambling here but in a way I think the overall problem can be summed up in that the complexities of life in the twenty-first century have outpaced the intelligence of the general American public. We do not have the education, the energy, nor the ethics anymore to answer to the challenges we face as a nation.

I hope I'm wrong but as of right now and the foreseeable future I think we're massively screwed.

Pretty sure you're not wrong. I was just thinking of my great-nephew last night. He's 9 months old and I have no confidence that he'll have any sort of life. Well, he'll probably have a LIFE, but what it will look like is anyone's guess.

I think Alex Huxley (Brave New World) came to the conclusion you did (50+ years ago) that our rational thinking hasn't kept up with our technological knowledge. It is a scary world and neither side has all the answers even though they act like they have the only answers.

I've got a long story that goes with that video, starts in Montana.

I was reminded elsewhere recently that it has long been my position we cannot succumb to our disillusionments, we're not Lucky Men and Women, we don't get to just lay down and die.

To all: I just got finished writing long responses to each of your excellent comments. I went to publish and Blogger lost them in the cyber-oblivion. Serious bummer.

We’re a collected bunch of individuals with good taste in everything. And that ‘everything’ also includes good taste in reading and that’s what makes us good writers and
researchers