My Thoughts on the Bizarre UAPs 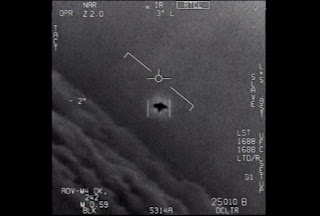 One of my most enduring but ultimately irrational aspirations was to live long enough to see humans make first contact with an alien civilization. This can be traced back to my childhood in the 1970's when I would browse the covers of cheap paperback books about UFOs and ancient astronauts at the local department store.

The subject of UFOs was a hot topic at that moment in popular culture with one of the paperbacks supposedly having a picture of an “energy being” on the cover. To my young and uneducated eyes still dealing with implications of the stories presented in Star Trek and other science fiction stories I was enthralled at the idea.

The fact that this energy being looked like a bunch of sparkles in a rough humanoid shape was something I didn't question at the time. Luckily for me, especially since I received most of my education in South Carolina which has never been a place famous for teaching rational thought, I eventually came to understand the vast, overwhelming majority of UFO encounters could easily be explained away with entirely earthly answers. Of course that meant any reported alien encounters associated with UFOs was the result of an intoxicating substances or an outright hoax. Probably like the dumbass trying to make a buck passing off a fake humanoid energy being.

Becoming a extreme UFO skeptic was a far better outcome for myself than turning into some redneck prole freaking out over a reported strange light in the sky. Real science turned me on to the idea of finding primitive but no less interesting organisms living deep underground on Mars or floating in the liquid oceans of the ice covered moons of Jupiter or Saturn.

Well a funny thing happened recently with UFOs or more accurately, Unidentified Aerial Phenomenon (UAP) as the Department of Defense is calling them and I find myself at a complete loss as what to think.

I'll be honest and write that I totally ignored the initial news reports of the United States Navy confirming the authenticity of leaked video showing UAPs being tracked my navy jets doing maneuvers that break the laws of physics. For example we're talking about UAPs making sudden 90 degree turns that produce several hundred gee forces.

Human pilots can take around nine gees before passing out with the structure of our planes able to take a few more before flying apart. These videos also show science fiction-like acceleration with no visible means of propulsion. No super-heated air coming from jets or even wings to provide lift. One in particular even has a UAP going trans-medium diving into the ocean and disappearing in the depths.

When I finally started paying attention to these reports it has been strongly alluded that other, still classified videos show these UAPs in high-definition performing other maneuvers that defy the laws of physics.

My initial thoughts about UAPs leaned towards Russia and/or China achieving some sort of technological breakthrough in both physics and structural engineering. That these UAPs were unmanned drones since any pilot flying such a craft would be turned into a thin paste of human salsa the second they attempted any type of maneuver that produced hundreds of gees.

Further reports featuring the navy aviators who tracked these UAPs as well as experts in field of aviation engineering suggested to me that for Russia or China to have produced these things the breakthroughs required would have taken the minds of people like Einstein, DaVinci, Tesla, Edison, Newton, and Hawking all at once. We're not talking next generation technology here, breaking the laws of physics, as these craft apparently can easily do, would literally require something done in science fiction set at least two or three hundred years in the future. Science doesn't work in a vacuum, so I am highly skeptical of some modern day science wizard developing inertial dampers for high gee turns and anti-gravity for wingless, hypersonic flying machines in his, or her garage.

I don't believe in conspiracies so the idea that this technology, which would have required thousands of scientists and a greater number of trained technicians as well a huge number of secondary support personnel to develop was kept secret for the decades required is ridiculous. So, where does that leave us?

Frankly I find it extremely hard to believe that an alien civilization advanced enough to travel the distance between stars would just decided to harass bored navy folks on the open oceans of Earth. Yes, there are reports that the Russians and the Chinese have their own investigations of UAPs. More disturbing and even scary are the reports of these craft are interfering with the operation of nuclear technology. We're talking about taking nuclear weapons offline and in the case of Russia bringing them back online as well as buzzing around nuclear power plants.

Included are two videos that I find highly credible.

High tech UAP's Very intriguing. Or some country secretly developed it or there are aliens around. I am sitting on the fence regarding aliens. I wouldn't be surprised if they existed. There are so many galaxies. Human beings are not the smartest cookies in the tin. Hopefully there are smarter ones somewhere in the universe.

For ten years I lived in SW Utah and often travelled through Rachel Nevada (near site 51) on my way to and from the Sierras. Once I stopped late at night for coffee (it was about midnight and it was Labor Day weekend). Instead of a quaint town with a handful of folks in the bar (the only thing opened), I was shocked to see a line out the door. People were everywhere. I learned that on Memorial Day and Labor Day, people gather there to see what they can see. It appeared to be a conference made up of IBM-tech types and Stoners left over from the 60s. There was all kinds of listening devices, cameras, etc. Inside the bar, at a booth, there was a young couple cleaning the lens of their camera. I wanted to tell them not to bother, that I have yet to see a picture of a UFO from a clean lens, but then decided to keep my sarcasm to myself. I brought a cup of coffee and drove on through the night. ,

I'm just fascinated! I think it's either actual real (apparently bored) aliens, or some criminal mastermind ala James Bond. Ha!

In college, my freshman writing seminar was about UFOs. At the time, alien encounters in the form of abductions and probings were the big deals. These days, the fuss is more about the crafts themselves.

My thoughts are the same as they were at the time: if they're here, they're so much more advanced than we are that imagining we could do anything about it one way or the other is absurd.

Perhaps, some day, one of them will decide we're ready for First Contact. To be honest, 2021 wouldn't feel like the right time to me if I were them.

Of course, it could be Vogons in which case we're screwed anyway. Get ready for some truly awful poetry.

Marja: Yes, I'm one the fence myself about who or what is flying these "crafts." Having a hard time imagining advanced aliens flying to Earth just to buzz navy ships.

Jeff: Honestly, I've never wanted to get into a conversation with UFO believers. They never really understand the complexity involved in traveling interstellar distances. They've seen Star Trek and to them it's as easy as saying "engage" like Picard.

The Bug: The entire topic is beyond bizarre. What worries me is that the DoD wouldn't have confirmed the videos if they weren't scared.

Armchair Squid: With the world going off the rails with the likes of trump, Putin, the leader of China and about a half dozen other nutcases in charge of nations, the snarky side of me wants to believe the aliens are here to take charge so we don't kill ourselves and the planet.