You Know This is Coming 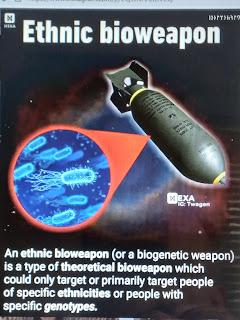 For reasons that usually escape me I'm a fan of most of H.P. Lovecraft's stories. Cosmic horror filled with powerful entities totally ambivalent to humanity's existence is a level of science fiction that may have a closer approximation to reality than I'm comfortable with.

All that is beside the point with the key idea here being horror, painful intense dread of something perceived as bad or evil. Humans excel at horror, we are adept at torturing and killing each other on industrial-sized scales. As recent science podcast I listened to said ants are another type of animal that will wipe out an entire competitor population. Then again ants aren't sentient while we have plenty of religions and beliefs that say killing each other is bad. So on a certain level between ants and humans I'm not sure who has the moral high ground.

It appears humans have begun to reach for a new level of horror with the possibility of an "Ethnic Bioweapon" that could be designed to eliminate inconvenient populations of fellow humans. As the picture says, it might be possible to design a virus that targets specific genotypes. A terrifying prospect to say the least, but honestly you know Old Adolph Hitler would have jumped for joy to have such a weapon in his inventory.

And as you can already guess, human wisdom and morals has not advanced at all sense the end of the Second World War. I'd even go as far as to write that here in the "Land of the Free and the Home of the Brave" our moral high ground has greatly eroded in recent years. And well, you know there were those little oopsies with how we treated the Native Americans and the African slaves. Given the fear and anger oozing like a newly reopened sore from the crowd wanting to Make America Great Again I'm sure a few of the more rabid members would love to have an ethnic bioweapon.

The following source is unknown:

U.S. Secretary of Defense William Cohen considered such a "genetic weapon" plausible, and believed the former Soviet Union had undertaken some research on the influence of various substances on human genes. In its 2000 policy paper Rebuilding America's Defenses, think-tank Project for the New American Century (PNAC) described ethnic bioweapons as a "politically useful tool" that US adversaries could have incentive to develop and utilize. This weapon could be used to kill people with a specific code in their DNA essentially and effectively whipping them from the face of the earth.

Sheesh. Human beings are the worst.

Armchair Squid: Can't help but worry things have gotten worse since the end of the Cold War.

The Bug: We're not very smart, that's for sure.

The threat of communism and totalitarianism has been replaced by the threat of religious zealotry, both at home and abroad. Yeah, not an improvement.