Addendum for The Tomorrow War 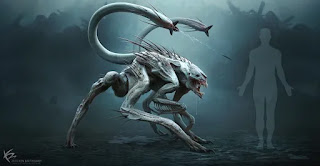 During my rush to express my general dislike of Chris Pratt I forgot to add some important information about time travel. While the initial sloppy premise of The Tomorrow War was for the world of 2051 to ask for help from our present day world the question of changing future events was always in the background.

Speaking strictly as a curious layman when it comes to the actual implications of traveling backwards in time I believe the scientific consensus is that it isn't possible. We are naturally traveling into the future one second per second and through various means like approaching the speed of light or sitting close to the edge of a black hole “faster” forward time travel is possible.

But every reasonable science article I have read or video I watch says traveling backwards in time is problematic. Without getting deep into the mathematical weeds, which I have no ability to comprehend, I think Einstein's theories say nothing prohibits backwards time travel as far as the universe is concerned but it would take God-like powers.

The key here is that nothing outright forbids backwards time travel so various real and respected scientists have speculated on what would happen if someone or groups began shuffling through the space-time continuum.

Is it just me or does this put a big dent into the idea of free will?

The alternative is that instead of a temporal loop, time has a way to protect itself. Instead of backwards time travel such a homicidal grand kid would instead travel to an alternate universe set in the years during his grandfather's childhood. Killing that person would prevent your counterpart from being born but leave your own universe/timeline untouched.

Going for shits and giggles here by throwing a hypothetical timey-wimey wrench into the time-space continuum, but what would be really wild is if we could reverse time would be to look at events on a much wider perspective. Instead of focusing our attention just on an insane genius-level kid traveling to the past to murder his teenage grandfather, look at the mundane decisions normal people make during the course of their day during that same period.

Insane kid keeps a record of what his friends, Tom, Dick, and Harry did the day before he pops back years in the past to kill his grandfather. Insane kid then goes forward in time to that day and secretly observes his friends to see if they make the same choices. These choices could be anything from what shirt they wear, the route they take to work, or what they decide to have for lunch.

If there is the least little bit of deviation from what they originally did that would leave open the idea of free will, I guess.

This all feeds back into the ultimate conclusion of the movie. While sending troops to the future to fight a clearly lost war just doesn't make any sense. The world of 2051 could have just sent the same group to our present with tons of information on what will happen along with the bio-weapon to make a more plausible movie.

Personally, while I have my doubts on the degree of free will humans actually have, I think the far more likely reality of backwards time travel would be sliding over to an alternate universe. But then again I'm no scientist, but goofing with the flow of temporal events just doesn't ring true in an universe that seems so highly ordered.

You have hit on many of the reasons why I find time travel narratives frustrating. Even beyond the paradoxes involved, I find their use in a popular scifi television series, for instance, to be a clear sign that the writers have run out of other ideas. Do good stories crop up every once in a while? Sure. But a mess is far more likely.

My basic ask of a time travel narrative is this: there have to be rules and the story has to live by them. This is why Doctor Who, for the most part, works. As far as I can tell, Star Trek doesn't have rules and it drives me crazy.

My first thought with your first review was simply "if they can go back in time to recruit cannon fodder one would think they could ~ like your dying/notdying grandfather ~ do something to change the future outcome, ala Terminator. The premise of the movie is like the publishers rejection of my shorts about moon-sized hives of bees fleeing the solar system and old people living out on the high desert in million dollar motor-homes with nowhere to go and no way to get there: it's implausible.

Have you read 11/22/63 by Stephen King? I can't remember if we've discussed it before. VERY interesting time travel book (trying to prevent the assassination of JFK). Well, the time travel aspect was interesting - the book, as usual with King these days, was about 500 pages too long :)

Armchair Squid: Yes! Despite what a lot of the hardcore fans like to believe, Star Trek does play fast and loose with canon such as time travel. And time travel episodes are often my least favorite. The one exception that comes to mind was a series of time travel episodes DS9 did that takes place more or less in our current period.

It was the one where the Defiant and crew get thrown to the early twenty-first where the United States is having a sort of MAGA period. Unemployment, homelessness, and a government that was either paralyzed or didn't care about the poor. They seem to have hit the nail on the head that time.

Ten Bears: Even after a couple of weeks this movie seems worse when I think about it.

The Bug: I saw the 11/23/63 miniseries on Hulu. It was great! I've been reading far more Stephen King lately having finished "The Regulators" and "Desperation" in the last month of so.