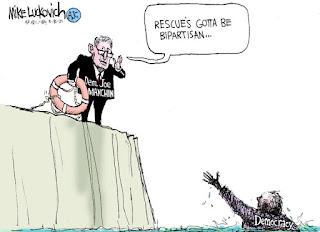 Okay, I'll make this brief because I've got people coming to remove some storm damaged trees. What does a dangerously authoritarian-leaning political party do when they can't win elections? You got it, they change election laws in the state legislatures they control.

What does the other political party do to TRY and avoid having elections stolen? You write a bill that prevents the other party from destroying democracy. What's seriously tragic though is to have the Democratic senators from West Virginia and Arizona sabotage the process. 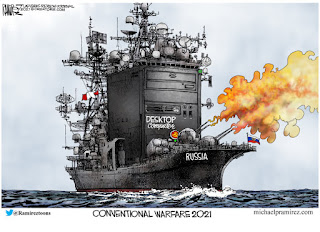 On another front for those who don't realize this, we're at war with Russia. We have been at least since the November 2016 election, although it has probably been going on for years before that. While the recent pipeline cyber-attack was supposedly done by non-government hackers they have been traced to Russia. It would take strong evidence to convince me something like this happened in Putin's personal kingdom with him not knowing about it.

Putin is engaging in a curious form of asymmetric warfare with the United States. Numerous news reports over the years all suggest Putin blames the United States for the breakup of the Soviet Union. Putin's inference in American elections is certainly an attempt to spread dissension and chaos in this country. It wouldn't be hard to convince me now given his success that he and his cronies may believe they can actually breakup the United States as a form of revenge for his beloved Soviet Union. 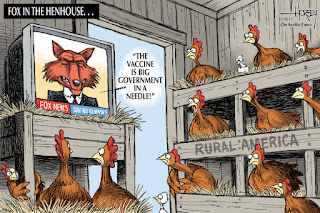 Understand something, for the most part I trust science and scientists. Of course where science gets sticky is when you have paid lackeys like the "scientists", who while employed by cigarette companies, claimed smoking didn't cause health issues.

The same can be said for current day "scientists" who work for oil companies and claim Climate change is overblown or not caused by humans. But for the most part if an unbiased scientist with strong evidence says something I'm usually going to side with that person.

No science is not a religion but it's a process that has been extremely useful in discovering how the world and universe works. Over the centuries since applying this process we have made the lives of billions of people far better. No science isn't perfect and the pursuit of knowledge can be a double-edged sword causing untold death and destruction.

In some ways we've been lucky with the Covid virus. It could have been far deadlier and with the idiots running around denying basic science and politicizing something trivial like wearing face masks the damage would have been far worse. I write this realizing well over half a million people died from Covid here in the United States.

The insanity of our times is exemplified when you have racists morons, like the ones on Fox News, spreading outright lies about the vaccines that could end this pandemic.

Totally agree on all points!

Unfortunately, you're right on all counts. It's hard to feel hopeful about the future these days.

I agree with you. I am also curious. Does your hospital publish or give out the number of COVID deaths it experienced? I was co-officiating at a wedding with a chaplain of a small hospital in NC who said they were having 4-5 deaths a day back in the winter and the hospital had less than 100 beds. I was shocked at the numbers.