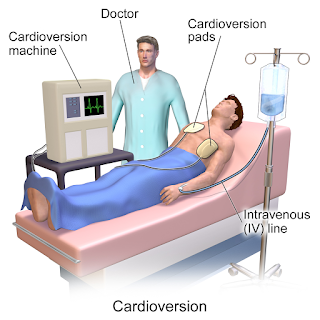 Two weeks ago the messaging service for my cardiologist left a voice mail on my phone saying they needed to talk with me. That at my earliest convenience they would like to setup a video chat between me and their boss. This messenger had a cheery voice that did not convey any urgency nor the reason my cardiologist might need to talk with me. In fact, it was heavily implied that the purposed of the video chat with just a routine followup concerning my chronic heart condition.

The best description for the messenger tone of voice would be something akin to the pleasant, laid back way a commercial airline pilot gently tells passenger and crew to return to their seats and buckle up during mid-flight. That the air ahead is going to get a little choppy and that an ounce or prevention is worth a pound or cure.

I've never been scared of flying, but I've sat next people on planes who heard the captain utter those same words and instantly turned a bleached white filled with existential dread.

Got to admit, I can relate to that sense of impending doom.

As I reported in my last post, I have a chronic heart condition that is genetically based. One little gene in my genome mutated essentially making my heart a biological time bomb. Long complicated story short, this mutation prevents my heart cells from properly making a protein which for me means my ticker can develop an electrical short circuit sending it racing uncontrollably. It that wasn't bad enough, it also means that in the long-term I have to deal with it wearing out due to cardiomyopathy.

Now in many ways I am lucky, my ailment, the LMNA mutation, was only identified in the late 1990s. At least now I can receive treatment in the form of medicine and my Cardiac Resynchronization Device which acts as both a defibrillator if I get in trouble and a pacemaker. Side note, having my CRT does officially make me a cyborg and when you throw in my mutation, I'm over halfway to being a comic book hero or villain. All I need now is some exposure to a metaphysical or mystical energy to push me over the edge.

Honestly, dealing with question of being either a hero or villain I'm leaning towards the latter these days.

Getting back to that video chat, when my doctor and I finally got around to it I was informed that my heart had slipped into an atrial fibrillation rhythm. And that he wanted to do a cardioversion to try and get it back into rhythm.

He played the pleasant, laid back doctor saying it was no big deal but I should still get it done relatively soon. This is where the existential dread enters my head and makes itself comfortable like some rich bastard taking up residence in a Manhattan luxury condo. Nothing concerning my condition has ever been easy nor normal. I would have loved for my heart issues to have been a “simple” heart attack where I get my pipes cleared out, been forced into a mandatory super-healthy diet, along with stern talks about losing weight.

But no, I got a mutation that can literally cause individuals anywhere between their late-teens and forty to suddenly drop dead. Yes, if you make it past your forties a person moves into the territory I now reside.

So with no other option in the matter my doc and I scheduled the cardioversion for last Thursday.

Thursday morning comes and my wife and I drive to the hospital for my procedure. I report to one of the administrative desk jockeys who quickly ushers me up to cardiac holding. I am told to strip down to my birthday suit, put on the gown, and to lay down on a stretcher and cover up. Luckily, the desk jockey remembered to pull the exam curtain closed around me before leaving.

This is when the waiting begins. Due to covid, my wife was escorted to the family waiting area where she had access to the morning snack bar. Even with the pandemic raging the family waiting snack bar was a borderline breakfast buffet. The two compromises with Covid-19 being that everything is prepackaged and the closure of the self-serve waffle maker.

I in turn wouldn't be allowed to eat until after the procedure. And with my wife required to drive after we leave the hospital, we were sure to hit one of her favorite eateries that served English teas and finger sandwiches. So in frustration I laid on the stretcher and played with my phone listening to everyone passing by. Just for shits and giggles I cued up Highway to Hell by AC/DC on my phone and let it play at full volume.

I work at that particular hospital so I wasn't really worried about any possible bad reaction to my music. Several people passing by did stick their heads into my area with one being a truly gorgeous blonde nurse who shook her booty at me for a couple of seconds before leaving. No, I had never seen the woman before and I regularly go through that area during my normal duties.

Within an hour my stretcher and me were wheeled into a nearby procedure room. It was there that I learned a different cardiologist would perform the cardioversion. My usual heart doctor was in another area turning another patient into a cardio-cyborg. The one disturbing feature of this new doc was his age, or lack of it. This guy looked so young shaving to him would be a semi-annual event.

The new doc informed me that before we could begin all the hair on my chest had to be shaved. No problem, but I would be lying if I didn't say I had a sudden fantasy of that beautiful blonde nurse returning to take care of that chore.

No luck, it was an old male nurse with a stern, Germanic disposition who seemed immune to the idea of smiling. The last step before we got down to the shocking business of giving my heart an attitude adjustment was them placing two huge conducting pads on me. One went on the front of my chest and the other on the back, trailing from both were cables that connected to the medical version of “Old Sparky.”

With cables connected and everyone in the procedure room getting ready to begin I suddenly got nervous about one crucial element.

“You guys going to knock me out right.” I said looking around at them suddenly wondering if this might be the reason my usual doctor was busy. Let the young, new doctor deal with the patient flopping around like a caught fish.

It was then that the Germanic dude actually smiled and began hooking up my IV which would supply the sleepy juice. Must admit I didn't appreciate their attempt at humor.

I realize that you went through a traumatic event (glad it went well), but I'm fixated on the breakfast buffet. When Mike had his back surgery a while back I had to wait at the hospital for HOURS and HOURS & there was no buffet to be had. They had a very dinky cafeteria area where I bought a can of tuna salad to eat on some crackers. Bah humbug.

You've got to look on the bright side. Gene Roddenberry said its not all going to end with a big flash and a bang! Life goes on. Paul Bragg was a great believer in distilled water, no salt or cakes! Instead eat melons. He lived to a ripe old age and his daughter Patricia Bragg took up his health crusade. I bought 10 of his books and what struck me was his knowledge about clean healthy living. In them he posits and lives by the golden rule what you eat today is walking and talking tomorrow. To cut a long story short arterial plaque tends to build up inside arteries and veins because for most of us we enjoy the good life and I'm no different, hence Bragg expounded the principles on clean living. Get well soon dude.

Wow, that's got to be pretty scary, but the fact you're writing this I assume it came out all right. Hang in there.