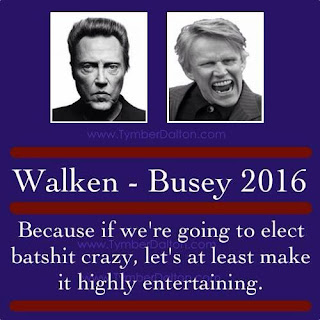 As anyone who has read my ridiculous rants and crappy fiction for any length of time should know, last Tuesday night was a full-fledged shit sandwich party for my family and me. Trump’s unexpected electoral victory over Hillary Clinton will go down as one of the most insane upsets in American history. For three days after the election, I was literally emotionally and mentally numb, hell I’m still coming to grips with this situation.


I honestly wish I could say something nice about Trump and the people that see him as some savior. Unfortunately, I can’t and I refuse to make nice given the crap such people rained down on President Obama from the day he won the 2008 presidential election. Pushing political ill will and outright hate aside for a moment, if Trump pursues his campaign promises I frankly see him creating a far bigger mess than the one George W. Bush left behind for the black guy to clean up. You simply will not bring back old-fashioned 1950’s manufacturing jobs when some chump in China or Mexico makes pennies on the dollar compared to an American worker. If these jobs did come back companies would have to pay workers enough to do more than just survive. They would mean Joe Sixpack having money left over at the end of the month to buy that new washing machine or television while being able to save a little for his kid’s college education. The cost of such wages would have to be passed down to the American consumer, which would mean a nice rise in inflation. To bust this bubble even further for those who don't remember the 1970's, American consumers hate inflation and tend to stop buying all those neat new adult toys which keep the economy afloat.


Then there is Trump’s promise to renegotiate trade deals and hit foreign goods with tariffs. Start pulling on those threads and the millions of jobs here in the United States that send their products overseas will definitely be in grave danger as other countries throw tariffs on our stuff. We’re talking trade wars with the global economy going into a tailspin with an economic depression the best of all possible outcomes.


But hey, Hillary lost and the Republicans have control of both houses of Congress, so the ball is firmly in their court. Given Trump’s mental and emotional instability and the Republican’s desire to make the United States into the image of Ayn Rand, a cynical part of me wants to see hell rain down on those silly souls who think Donald will lead them back to the proverbial Promised Land. All us sorry-ass liberals can do is sit back and watch the train wreck as it unfolds. But who knows, the bastard got elected, by the Electoral College, not by the majority of the American public, so who the hell knows how this will all unfold. I’m just going to start rereading Grapes of Wrath to refresh my memory of outright despair and struggle. I have a sneaking suspicion such conditions might return sometime between now and 2020.
On a lighter note, I am still in a state of semi-bondage as the great home renovation projects continue. I swear, my wife is taking on some uncomfortably similar characteristics to those little, megalomaniacal dudes that run North Korea.
Posted by Ryland Grace at 3:18:00 AM

I'm still in shock, too. I go back and forth between despair and the plan to become an organic gardener (to have at least some decent food to eat when hell breaks loose) and my perpetual optimism that says that nothing is ever quite as bad (or good) as feared or anticipated.

Not only is it tough to see that Hillary got the popular vote but lost the election, but now the Trump supporters are posting stuff on Facebook that says Trump really got the popular vote, too, the media just isn't telling the truth. I finally decided to unfollow my former boss from my last job in South Carolina to save my sanity.

Ugh. Just ugh. Wondering if I should buy stock in Valium and Prozac. Or alcohol.

what the future holds for you guys domestically and for the rest of us around the world - who knows?

let's just hope there are enough people around who have the cahoonas to vote against him on some of these big ideas.

It really is a nightmare. And to make things worse, if Trump gets impeached (FIRED!), then we'll have Pence. Just read The Handmaid's Tale to understand why that terrifies me. Sigh.

Here in NZ everyone is in disbelieve and shock too. We export a lot to america so we will be affected too but indeed the US of A will get reprimands by other countries closing their borders.
as trade agreements are running it will not take effect till in about 3 years. Meanwhile Trump can build his wall/fence. And than we wait what's up next ......