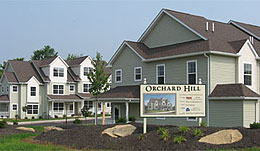 My sister's house is like all the other examples of middle class, suburban home ownership going up and down her street. There are, of course, variations on the outside appearance but they all more or less have the general floor plan, a trick long used by builders to streamline construction and hold down costs. Being a real estate agent you learn these semi-secret facts quickly and work hard to downplay them with possible buyers. None of that matters as I strolled up the short curved walkway leading to the front door, instead my thoughts flash back to the day Jessica and Samuel, her husband, moved in just two years before.

“Lily,” Jessica yelled at me as she exited the passenger side of the rented moving van, “Samuel is going to need some help getting the piano unloaded first. How long will we have to wait for your husband to finally show up so we can get started?” Samuel came around the other side of the truck at the same time not saying anything, but I could tell he was upset. I had no idea what they might be fighting about this time but I knew it had nothing to do with getting the piano off the truck.

Still, my sister's question was fair, but I nonetheless cringed at the implied insult towards my own spouse. My husband, Mark Harrison, is an industrial salesman whose salary comes largely from commission. That means incredibly long hours and at least two weeks a month spent on the road in an attempt to keep clients happy. Throw in the fact that Mark's father owns the company and often gives his son the worst accounts in an attempt to show the rest of his employees he does not play favorites only makes my husband's job more difficult.

Mark showed up about two hours later looking drained still wearing the suit that he wore the day before to give a sales presentation to a major company in the process of building a new factory outside Charlotte, North Carolina. A six-hour round trip drive from Columbia, made worse by stress and not enough sleep. Despite his exhaustion, my husband puts in a full day's work of helping move my sister and her husband into their new house.

Coming back to the here and now, I unlock the front door and step inside. I am greeted by silence and Jessica's collection of family pictures hanging on the walls and nick-knacks placed neatly on several bookcases. Jessica's decoration of her house looks like a chaotic blend of formal portraits and impromptu snapshots combined with cheap souvenirs from numerous theme parks. I find her style clumsy and a little stomach churning, but then again, I wasn't the one living here.

As I turn to walk down the hallway towards the master bedroom, I am confronted by the picture of Jessica and I sitting by a campfire. The picture was probably taken by Samuel from some distance and it is obvious my sister and I are engaged in some sort of deep conversation. As usual for most sisters, we liked to think we told each other everything about our lives. I turn away from the picture and continue to the master bedroom, I have a task to complete for my sister before I return to my own life.

The trip was a combined family vacation to the Smokey Mountains of North Carolina just a year after they moved into this house. We all stayed in single rental cabin next a beautiful mountain stream. Jessica and I, along with our kids had a blast, except Mark who kept getting work-related calls on his cell phone forcing us all to wait for him. Samuel took it upon himself to take his two kids, Zane and Isabel, along with my son Lewis on hikes on the trails going up into the mountains. This gave Jessica and myself a chance to relax and reconnect in ways we hadn't been able to since we moved out of our parent's house.

“I can tell Mark's job is really wearing you down.” Jessica said to me taking our conversation into an entirely new and unexpected direction while refilling my wine glass. At first I said nothing in return instead focusing my fuzzy concentration on holding my glass steady. We had already killed one bottle before Samuel left with the kids and I had every intention of helping finish the one we were drinking from then and the other still chilling in the cooler.

“It's Mark's dad,” I say in frustration after leaning back in my chair, “the bastard makes him chase down every piece of shit lead and maintain the most difficult clients. I've told Mark to quit and find another job but he wants to take control of the business when his father retires.”

“That's not what I talking about,” Jessica says smugly. “I can tell you two are drifting apart. He's carried this type of workload for years, and not long ago you would have checked on him several times and done something to make him comfortable. Now, you just leave him alone, truthfully, it's almost callous the way you ignore him now.” She said making a motion towards one the cabin window's where Mark was visible sitting at a laptop while talking on his cell phone.

My sister had hit on something way to uncomfortable for me to think about with so much wine in my system. The only thing I could do was play to Jessica's self adsorbed nature and change the subject. “Enough about me and my marriage, what are you and Samuel fighting about these days.” Always one to show off her dirty laundry to me, that starts Jessica on a long rant about Samuel's own job and its crappy pay. Before long, with the wine now really loosening my sister's tongue even further, she confides in me her growing suspicion that Samuel might be fooling around on her.

Samuel's job is inspecting houses still under construction and those that are finished and being resold. It is a tedious and lackluster job that involves him crawling around in places best left to the imagination. To help out my sister, I started letting Samuel do all the inspections on the houses I am selling. My husband was also doing Samuel and even bigger favor by letting him, unbeknownst to my sister, work part-time at the warehouse his dad's company used. Jessica and Samuel always seem on the verge of being overwhelmed by their bills and the money he earned at the warehouse went straight to them.

The only problem was that this created periods of time where Samuel was out of touch with his wife. As time went by though, Jessica began developing suspicions on what Samuel was doing during these periods. Of course, Jessica's growing accusations and Samuel's equally strong denials only made the situation worse until they separated.

I enter the master bedroom where Jessica and Samuel slept to collect another load of her belonging and take them to our parent's house where she and the kids are staying. Like a large majority of the bedrooms in this increasingly homogenized suburban existence it is a near perfect copy of hundreds of others I have seen. Especially the empty houses for sale where I now secretly meet Samuel when our schedules allow.

I am ashamed of the thrill that runs up my spine when I think of our accidental encounter that started our affair just a few months before. That day my schedule was insane, with me running around showing numerous newly finished houses to prospective buyers. I made one last stop to checkout a house being resold and found Samuel climbing down from the attic. Our reaction at unexpectedly seeing each other was almost bizarre in its hokeyness, until we touched passing each other in the hallway.

I fully realize there is no future in what Samuel and I are doing, it is a betrayal of the promises we made to our spouses but loneliness and frustration is a powerful acid on even the best relationships. Of course, the end result will be disastrous for everyone connected to us, but as I empty the drawers containing my sister's belonging I cannot stop myself from planning my next encounter with her husband.
Posted by Beach Bum at 7:10:00 AM

I have a feeling stuff like this is going on quite a bit in our sanitized homogenized suburban neighborhoods!

An interesting exploration of the relationship between the two sisters. It jumped about a bit and I wasn't always sure where I was in the story but the twist really hit me - didn't see it coming at all.

Pixel: Back in the 1970's in my hometown neighborhood, word got out about an incident where a guy threw his best friend out of his living room window. The adults talked about the event in hushed tones in front of us kids never revealing what exactly happened and like most things it was eventually forgotten. Some time during the 1990's I learned that the owner of the house and his wife were having the other guy and his wife over for dinner. Apparently everything was fine until the guests tried to recruit the other couple into their swingers club.

Back in the 1970's you simply didn't talk about such things in respectable company in my hometown. Long story short, when I learned this information it explained why several families either became hermits or moved away all together.

Rose: Absolutely, my jumping around in time was far too quirky. One of the reasons I gave up flash fiction for a long time was my inability to smooth over rough parts in a story. I just lost the proper feel for how a story should flow. Another reason was simply a good number of my stories simply fell flat that a soda left uncapped.

I really enjoyed this one. You did a great job exploring the dirty little secrets hidden behind closed doors in the cute little coves with tidy sidewalks and well manicured lawns. It seemed at the start that the one sister knew something was going on, but spared her sister the details. I certainly didn't expect the twist at the end. I, too, grew up with sending the kids to the other room while the grown-ups talk mentality. We, of course, listened in as best we could though, and our little neighborhood was actually a soap opera and a half at times.

Most of the intrigue was generally centered around members of the same family. Your story clearly reveals the hypocrisy that can occur between two people that are supposed to have each other's back.

Joyce: Thanks! Like I mentioned my fiction ideas have been flatter than the Kansas prairie for a long time. I loved this prompt though, so much I might return to the story and expand it some at a later date.