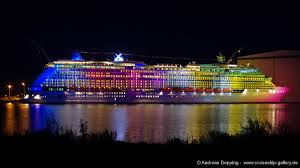 (Author's Note: Had to use the words tunnel, measure, eyebrow, corporation and cuff in the story. They're all in there, I just haven't highlighted them like I did in the past. Here's the link to the Flash Fiction Friday site.)

The cruise ship, Ocean Wanderer was already docked at its Port Canaveral terminal when I arrived and still in the process of disembarking over two thousand irate passengers. The basis for their anger was that the ship was back in port three days early from what was supposed to be a week long Caribbean cruise.

As I walked up the gangway, many of the departing could be heard on their cell phones talking about suing the corporation that owned the ship. Their anger was reasonable given that the official reason for cutting the cruise short was an engine problem requiring immediate repairs. Had they known what really happened I could only guess at the panic that might have ensued.

“Mr. Jonathon Carter?” The man with bushy eyebrows and dressed in the white suit yelled from across the grand entrance lobby as I stepped onto the ship. I stopped and waited as he quickly threaded through the thinning crowd leaving the boat. “You are the federal agent sent to examine our shipboard problem? He asked leaning in close to me.

“Yeah,” I said being careful not to pull out my badge and ID and alert the departing passengers that something had gone gravely wrong while out at sea. “I'm guessing you must be Thomas Sullivan, the ship's purser.”

“Yes agent, the captain has instructed me to escort you to the cabin in question.”

Sullivan then did an almost military-style about face and began walking away. I followed behind and began checking out the surroundings along the way. Before the divorce, my now ex-wife and I did a lot of cruises but the Ocean Wanderer was one of the newer and very upscale ships people like me only saw on television. The designers had gone with the ultra modern look making the ship seem like something from a science fiction movie. My one off the cuff criticism though was that the passageways looked more like tight, foreboding tunnels.

I followed Sullivan for several long minutes trying to memorize all the twists and turns as we worked our way through the ship. As Sullivan and I approached the cabin in question I wondered how the crew had gotten the passengers out of this area without alerting them that a crime had been committed. I didn't have time to ask before Sullivan walked right up to the door and lightly tapped it three times.

Waiting inside for me was the ship's captain, Nathan Anfinson, and the safety officer, Catherine Hammon. The briefing I read on the drive down said Anfinson was in his early sixties and a retired veteran of the Swedish Navy. On first glance I could tell the life as a cruise ship captain agreed with him. Anfinson was tan, physically fit, and except for the pitifully thin array of gray hair on his head looked fifteen years younger than his actual age.

Catherine Hammon on the other hand looked like all sorts of trouble. My guess was that she was in her late-thirties, a few years younger than me, and with a body men would definitely kill for the chance to touch. While both Anfinson and Sullivan wore the official, and out of date white suit that was standard uniform for the cruise line, Hammon's version had obviously been tailored to fully display her body in all its glory. As a counterpoint to the uniform, her blond hair was neatly bundled up in professional style but that just had me imaging her pulling out a couple of pins and allowing it to freely fall about her shoulders.

Both Anfinson and Hammon shook my hand and then showed me the reason for my presence aboard the ship. Anfinson pulled back a blanket that had been thrown over the bed to reveal the body of Mr. Ernest Kenward. The murderer had tied Kenward's arms and legs to different corners of the bed then slit his throat. The silk sheets still gleamed with the look of the blood puddling around the body.

“Ms. Hammon,” I said, “the report you sent stated Mr. Cohen's companion, a Joanna Hilbert, discovered the body around three o'clock in the morning. The followup report also states that you allowed her to disembark just after docking. Can you explain why you allowed her to leave?”

“Agent Carter,” Hammon said in a sultry voice as smooth as silk, “you have to understand the nature of our cruise line. We cater to a select clientele who cherish their privacy. Mr. Kenward was an investment manager for a major American bank in New York and Ms. Hilbert is a federal judge. Given her stature and obvious reaction to Kenward's body I used my authority as chief security officer to released her. Given the trauma she endured, I can't imagine what might have happened had she been forced to stay any longer and answer questions that might humiliate in front of her colleagues.”

It didn't take a rocket scientist for me to recognize the implied warning. “Okay, your report also left out where Ms. Hilbert was during the time Mr. Kenward was murdered.”

Catherine Hammon just smiled, “She was being entertained elsewhere.” She said with a look that suggested far more than I was authorized ask.

The cabin was large and roomy, a given when you consider the abundant wealth of an investment manager, and even possessed a balcony allowing the privileged to sit outside and enjoy the ocean. “Captain Anfinson,” I said, “doesn't the Ocean Wanderer have an elaborate camera system that records the passengers in the corridors?”

“Yes Agent Carter, and we reviewed the tapes. It only shows an obviously drunk Mr. Kenward entering the cabin and no one else until Ms. Hilbert several hours later.”

I stepped around all three and walked over to the sliding glass doors. They were unlocked and easily slid open. I stepped out on the balcony and took some deep breaths “How about the camera system mounted on the side of the ship to detect someone falling overboard? No one on the bridge saw anyone climbing up or down the side of the ship to reach Mr. Kenward's cabin?”

Anfinson now looked obviously upset, “No agent, the system went down late yesterday and has yet to be repaired. Why are you asking questions that will embarrass my cruise line. The murder happened in international waters and the Ocean Wanderer is a ship registered to the nation of Panama. Our calling the FBI was just a courtesy, one you seem to take enjoyment in abusing.”

I admit Catherine Hammon was good, it took less than a minute for her to whip out a cell phone and dial my boss. He promptly reminded me about the nature of cruise ships and how the investigation of the murder was something the cruise line and government of Panama would have to pursue. I was new to the Port Canaveral area and had little expertise in how relations between the FBI and these foreign-registered cruise ships worked so I measured my next words carefully.

“I apologize Captain Anfinson, I meant no disrespect. Thank you for being patient and I will file your report just like I was briefed by my predecessor.” With that I allowed Sullivan to guide me back out.

That night I'm back in my apartment when I heard a knock on my door. It was after midnight and as a precaution, I reached over for my pistol. When I opened the door, I was somewhat surprised to see Catherine Hammon standing there wearing a silky black dress.

“You were good, Jonathon,” she said walking in, “even I almost believed you didn't know what was going on.”

“Well, this was the first time I had to cover for your kind, although you went a little overboard with all the animal blood on the bed. And at least I didn't ask whether or not there was any blood left in Kenward's body.” I said feeling my lust growing.

“Yes,” Catherine said as she casually pulled loose the straps on her dress and let it drop to the floor. “Anfinson is a good man who is easily managed, I wouldn't want anything unfortunate happening to him, or you.”

She then rushed towards me and we kissed. It was pure animalistic passion devoid of any higher emotion. When we finally broke apart she smiled and I could see that her upper and lower fangs were exposed.

“You might want to call in sick tomorrow morning, Jon,” she said smiling like a wolf. “We're going to have a busy night.”
Posted by Beach Bum at 6:38:00 PM

I'm in awe of your skill to catch five random words thrown at you and make a story out of it.

I certainly didn't see that ending comine and now wonder what's up.

Pixel: Thanks, didn't know if this would work.

Sage: Didn't have a real ending until the last 300 words.

Great story and brilliant ending! Thanks for sharing.

Slick stuff. Talk about making sure you have a 'captive audience'. They handled it so smoothly, and that's how it would have to go. You can't afford to have a panic on a cruise ship. I've read nightmare stories about problems that have occurred on cruises, where everyone was confined to their cabins and the ship returned to port ahead of schedule. No refunds were offered either, so this actually is quite like real life, except perhaps for the event that brought them back to port.

I always wanted to go on a cruise, but every time I read an article about something horrific going wrong (one had their plumbing back up and toilets overflowed all over the ship), I remain grateful I've never had the opportunity. But your cruise? Do you ever really know who, or what, is in the cabin next to yours?

Great story. Very creepy and yet the ending was fun too, in a disturbed kind of way.