Irritating Forays Into My Subconscious 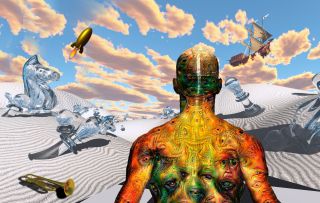 Giving myself a little credit here but my imagination is one of my few developed talents. So much that my creativity even extends to the dreams my subconscious weaves at night. The source of this creativity during both my waking and sleeping hours can almost certainly be traced back to all the science fiction novels I've read and the physiological and thriller movies I watched over the years. Many have left such a huge physiological impact that for years my nightmares hosted a bizarre array of terrible characters.

For example many of my dreams have hosted a collection of murderous xenomorphs from the Alien film series. In my dreams I usually find myself trying to allude the creatures whose only purpose is to find hosts for the parasitical “face-hugger” so more of them can be reproduced.

Joining in for the fun were the Borg from Star Trek, a polyglot of many alien species forcibly assimilated into a militaristic hive mind. During these dreams I find myself recoiling at how they violate the mind and body of captured individuals during the assimilation process.

One of the more curious participates in my nightmares were the Draka, a creation of the author S.M. Sterling, someone described as the H.P. Lovecraft of political science. See, in the world of these Draka the Americans loyal to the British Crown fled to South Africa instead of Canada at the end of the Revolution. This change in history led to the creation of a “super Nazis” society dedicated to the literal enslavement of every human on the planet. Spoiler here, but at the end of the Draka trilogy they end up in control of Earth and the entire solar system.

Those are just my dreams where familiar characters take part in playing with my anxieties. They're a disturbing bunch but I take some small amount of relief in having some truly evil phantoms running around my head. Where things take an abrupt turn to the surreal is when my brain begins to piece together random elements into something that leaves me wondering where the dream ends and reality begins.

Way back in the early 1980s when I was living on the coast, I had a particularly disturbing dream that left me confused for days. It all began during a late night summer thunderstorm with me “waking up” during the worst phase of the lightning and thunder. Somehow the lightning and thunder turned into someone desperately knocking on the front door. It was the kind of pounding knock of someone that in movies was fearing for their very life.

Since I lived in the middle of a fairly dense neighborhood, the idea of someone actually at the door in the middle of a thunderstorm didn't make any sense. In reality, I believed I turned over in my bed and went back to sleep. When I did truly wake up, possibly hours later but before sunrise, I went to the door to look outside. I saw nothing and went back to bed. The weirdness came when I later stepped outside to get the newspaper.

There was a woman's shoe on the front porch. I have no idea where it came from and while I'm mostly sure the late night knocking on the door was a dream, I've got to admit it took days for me to shake off the feeling I might have missed something real.

Over the intervening years I've had what I hope are the usual, normal amount of those strange dreams. But relatively recently I've had another that tends to replay itself with no apparent rhyme or reason.

The actual events in the dream are consistently fuzzy but they all revolve around the main point that I have forgotten an important piece of vital information. Sometimes during this dream I feel I might be on the verge of remembering that lost piece of information, but it metaphorically slips away again. I then wake up and have the irritating feeling that my subconscious was actually trying to send me a message. By the middle of the day I've shaken off that strange feeling but it really bothers me that the dream will return at some point.

Well, that dream did return last week and it has evolved a new level of complexity. I was once again trying to remember something I had forgotten but this time I attached a name of a person to this missing knowledge. Just to make the situation more puzzling, the name now associated with the dream is unknown to me. Yes, my assumption is that my subconscious has reached into the cosmic grab bag and pulled out a name from nothing. That explanation is reasonable and highly probable but it still doesn't feel right.

I've gotten to the point now that I'm starting to miss the xenomorphs and the Borg, but not the Draka, those bastards are really bad.

Email ThisBlogThis!Share to TwitterShare to FacebookShare to Pinterest
Labels: dreams, essay, I Got Nothing, WTF!

Dreams are interesting. For years, I've recorded most of mine in a dream. Occasionally I will have a nightmare, but most are anxious dreams or dreams where I do something I wouldn't do when awake! Sometimes, those can be troubling.

OK, there is a Dean Koontz book you need to read: Ashley Bell. What a bizarre book involving dreams! I only gave it 3 stars - it's not my favorite of his books (One Door Away from Heaven is my favorite), but it fits this subject matter to a T.

The other morning I dreamed that Mike was stomping around the house so much that it shook. But it was just an earthquake. Ha!

I lived in Japan for two years in the late '90s, a country where the rail system is a central feature of daily life. Ever since, my anxiety dreams typically involve trains: missing trains, missing my stop, getting on the wrong train, etc.

I'm happy to say I don't have many nightmares.