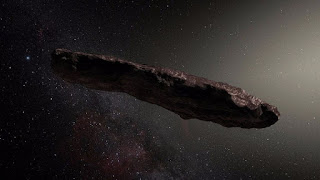 Forever on the lookout for science news stories to turn me away from the usual human-created crap, I have been in proverbial and literal heaven for the last several weeks. Back in October of this year, the astronomer Robert Weryk discovered a peculiar object that had passed through our solar system and was already on its way back out into the depths of deep space.

This object, given the name Oumuamua, meaning “scout” in the Hawaiian language is a metal heavy, cigar-shaped asteroid measuring 230 by 35 meters (that's 800ft x 100ft for metric ignorant Americans) that originated from an entirely different solar system. This was determined because of its course which had it entering the inner solar system at six degrees from the solar apex (the direction of the Sun's movement relative to local stars) and that fact that it was traveling like a bat out of hell as far as relative speed to the Sun is concerned. Traveling at 26.3 km/s, or 58,900 mph, Oumuamua is already halfway to the orbit of Jupiter and will eventually catch up and pass NASA's Voyager One space probe, the most distant manned-made object which is traveling about 17 km/s or 38,610 mph. 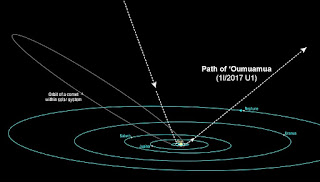 Two things are really cool about this chunk of tumbling space metal. The most important, and scientifically real, is that it is the first confirmed object that came from outside our solar system. For those not grasping the concept, Oumuamua has been traveling for at least millions, if not billions of years between the stars. The distances and time involved for this journey are almost impossible for humans to fully understand.

The next reason is that Oumuamua has a really weird, cigar-shape not unlike theoretical models for possible rotating space colonies or even how movies and television often imagine fictional starships. The fact that its tumbling end over end and not cleanly rotating along the length of its axis gives Oumuamua a mysterious air, like it might be a long dead, derelict space ship for those with overactive imaginations like myself. If fact, the great science fiction writer Arthur C. Clarke wrote a book entitled Rendezvous with Rama where an object like Oumuamua is detected and does turn out to be a combination rotating space colony/ slower-than-light starship. The book set in the future where a type of solar system wide, semi-military space force exists, a human-crewed space ship is sent to intercept and investigate the alien-constructed craft. Whether of not the fictional Rama had a crew is, to me, a subject of debate since the beings the human explorers encounter are more than likely non-sentient robots programmed to maintain the apparently uninhabited ship.

Oumuamua weirdness has compelled real radio astronomers working for SETI to turn their equipment towards it in hopes of catching some type of artificial radio signals. Scientific American reports that they listened for two hours and came away with 90 terabytes of data. Nothing spectacular about that amount of data since most everything in space has a way to emit natural radio signals. Sorry folks, even with my overactive imagination Oumuamua is certainly nothing but a seriously epic rock on a voyage that will more than likely never end.

Despite the novelty of Oumuamua, astronomers are saying that interstellar objects like it passing through our solar system are a common occurrence. We just happen to be looking in the right place and at the right time to see it zip by. Still though, it is nice to imagine Oumuamua might be a stealth alien probe some mothership still way out in space launched in our direction to get a relatively close scan of Earth and the bizarre, semi-intelligent creatures that live on it.

I now return you to the regular self-destructive and banal crap that dominates our existence on this planet.
Posted by Beach Bum at 7:50:00 AM

If they've been watching us for any amount of time, I am confident they'd say, "Turn off the lights and communicaiton systems and keep quiet until we're past these folks. We do not want them sensing us!"

More seriously, is it going straight? Isn't pretty much everything out there - even comets - in some sort of elliptical orbit, no matter how long?

Long story short, Oumuamua is just a rock that got tossed out of its solar system.

It's at least given us a nice meteor shower (sadly I only saw one while taking the dog out before bed). I read Clarke's "Rendezvous with Rama" but that was so long ago (like 40 years) that I couldn't tell you about it.

Is Oumuamua the same "Tictac" shaped object that a former Pentagon official recently talked about, saying there was evidence that aliens had come close to earth? Or is that an entirely different story?

Sorry for my ignorance - I read bits about it, but not enough to really know what's going on.

Pixel: No, the Tictac thing is video shot by a navy pilot from a gun sight camera. Don't ask me what it really is because I'm highly suspicious of any imaginary not recorded in High Def.

Oumuamua is an asteroid from another star system already heading back out to deep space.