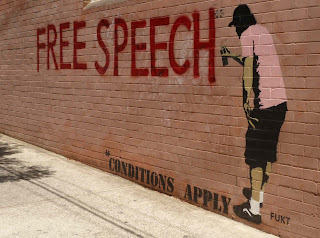 Reiterating something I have mentioned uncountable times in the past, my childhood view of the future was guided by the science fiction I read and watched on television and at the movies. The only thing more nerdy about that admission is its overwhelming and sad naivety. My only saving grace was that almost an entire generation of kids from the sixties bought into that delirium far more than a stupid kid from South Carolina. As time progressed though, I eventually started reading science fiction that had a far darker and, sadly, more realistic view of the future.

One of these books, published in the early 1980's, takes place in a future where the United States government had devolved into an authoritarian regime where corporations stifle free speech through libel laws and suing anyone they thought had looked at them sideways. Taking place in the twenty-first century there were other quite disturbing problems besides corporate dictatorship.

For one thing, Charles Manson had become something of a nationwide Jesus Christ figure, worshiped by millions despite his horrific crimes. The Soviet Union, which had never fell, merged with Commie China to create a new empire that stretched from eastern Europe to southeast Asia. And for reasons I don't remember, in this book the South American countries all developed nukes and one day decided to use them on each other. All things considered, it was an extremely unpleasant world whose one saving grace was that a giant space colony had been built in Earth orbit providing a refuge for the relatively sane humans.

All the weird future stuff aside, it was the author's view of the lack of free speech in the United States that made my blood run cold. Simply put, and going by memory, the male protagonist in the book laments that a corporate CEO could have Joe Blow thrown in jail for years by just saying his expensive underwear smelled bad. That all practical opposition to the rich and powerful was now impossible. The situation wasn't exactly Orwellian, but the results were essentially the same. Once I finished the book, I put it away thinking there was a better chance of that space colony being built than having to deal with the end of free speech here in America. Once again I have been taught that the light you see at the end of the tunnel is not bright sunshine, but that of an oncoming train.

This is where SLAPP, (Strategic Lawsuit Against Public Participation) makes its dictatorial presence known. Keeping things simple, it is a lawsuit used by corporations to silence critics by burdening them with the cost of a legal defense until they are forced to abandon opposition to their plans. The typical SLAPP plaintiff does not expect to win their lawsuit, they get what they want through intimidation, fear, mounting legal costs, and simple exhaustion. We're not talking about brutal the thought police or newspeak from Orwell's 1984, but SLAPP is a real and direct threat to free speech in the United States.