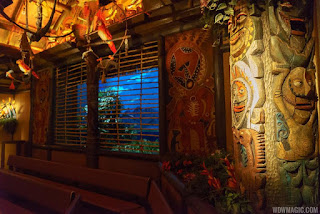 Thinking back on it now, I find it astonishing that my dysfunctional parents somehow found it in themselves to cooperate enough to take my siblings and myself to Walt Disney World just one year after the place opened. The city of Orlando and the surrounding area were, compared to now, still overwhelmingly underdeveloped with mom-and-pop hotels and restaurants existing alongside the young and sleepy corporate giant. I imagine those quaint and genuine local businesses had no idea that just a few short years later they would all be wiped off the map as the joyful rodent's empire began expanding at an ever increasing pace.

Don't get me wrong, my wife and I love everything about Disney. So much that we have not only sunk more money into its Vacation Club than I comfortable thinking about but that I have honestly lost count of the times we have visited each of its parks. Like some pathetic stoner desperate to get a new fix, even now I am looking forward to staying at Disney's small resort down on Hilton Head Island in the summer of 2018 and then making our way back to Disney World itself in 2019.

It's hard to really describe why I enjoy the parks so much when stories abound about how some who visit them are overwhelmed by the crowds and the growing prices. Usually, I despise crowds myself but in all the times I have been down there with my wife and kids, I somehow found a kinship with the other parents in the long and meandering lines waiting for their turn to enjoy Walt's creation. There were numerous times where my wife and I and other parents in the lines shared vital supplies like baby wipes, spare diapers, juice boxes,and assorted prepackages snacks in an effort to get the kids through the long minutes of waiting. 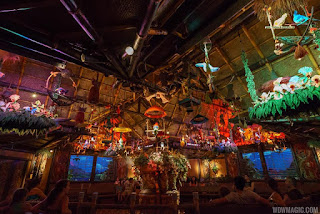 Another reason I fell in love with Disney World was my discovery of the Enchanted Tiki Room on my first visit back in 1972. For those who don't know, it is a “pseudo-Polynesian themed musical animatronic show” featuring over a hundred colorful robot birds handing down from the ceiling. The show has them singing and making jokes with the climax being when a group of Polynesian tiki gods, craved figures lining the walls, become angry and throwing a tantrum.

The interior of the attraction has fake windows looking out towards a tropical island scene with heavy foliage and mountains creating a sensation, at least in me, that you are somewhere in the beautiful south Pacific. When the tiki gods get angry the skies in these island scenes gets dark with flashes of lightning and the sounds of thunder and rain adding to the dreamy feeling. The thing that has always mesmerized me is that in one of the fake windows there is a simple thatched hut not far off in the distance. This will sound weird, but I have always found that scene to be incredibly peaceful, so much that every visit to the Enchanted Tiki Room I find myself looking at the scene instead of paying attention to the show.

The Enchanted Tiki Room at Disney World was my first exposure to what is normally called “Tiki Culture” which is a very Americanized version of Polynesian culture and art. First conceived in 1934 with the opening of Don the Beachcomer, a Polynesian-themed bar and restaurant, American tiki culture has to me always symbolized a laid back and easy going style of life. Restaurants and bars that go with this theme are known for their tropically-inspired drinks with their menus leaning heavily on Hawaiian and even Chinese dishes.

While tiki culture-inspired restaurants and bars are quite rare in my area, it is the music that continues to offer up that relaxing, peaceful, and dreamy feeling. Luckily for me I found Exotic Tiki Island, a website that is dedicated to nothing but playing vintage Hawaiian, exotica, and tiki tunes that easily transport me to that island scene I first saw at Disney World so many years ago. Ran by a guy going under the name of Tiki Brian, the music he plays is one of the best ways to shed the worries and fears that are daily coming closer to overwhelming us all. If you get a chance, jump over to his website and listen to some of the many archived podcast shows he has available. Needless to say, one of my favorite things to do on the weekend nights when I am off is to fall asleep to the amazing songs he plays.
Posted by Beach Bum at 7:47:00 PM

Email ThisBlogThis!Share to TwitterShare to FacebookShare to Pinterest
Labels: Disney, I Got Nothing

This is a very laid back relaxing style, I can see how listening to this while ou fall asleep is the perfect thing to completely relax you.

I have a good friend whose Father has been a musician his whole life, he and three friends formed a group and they tour the nursing homes playing Hawaiian misic.

I have never been to Disney World (I have been to Epcot, but don't care to go back). But thanks to inlaws who like such places, my kids didn't miss out on the experience! As for Tiki bars, you should read J. Maarten Troost, "Sex Lives of Cannibals" and "Getting Stones with Savages" to appreciate the seas (and to have a few laughs at the same time)

I'm supposed to be on a conference call (shh!), so I can't go listen yet, but I will check it out! Who couldn't use some calming tunes?

Jimmy: Frankly, I really need to listen to the podcasts during the day so I can actually finish one.

Sage: Disney is an acquired taste, something I learned from a couple of people who had absolutely terrible visits. As for those book, they have been on my Amazon list for years. I definitely need to get around and ordering them.

The Bug: They're really great!


Your an odd duck there beechy!

Ha - you're not the only one! When I worked at Trane in West Columbia, we would always talk about the imaginary Tiki bar on the roof.

I'll have to check out the Tiki Room next time I'm at Disney!