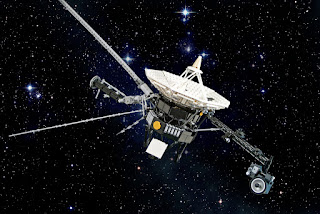 Pondering metaphysical concepts, without regard to crazy ass theories and ideas most normal people either discount or ridicule, is something I do many times in a twenty-four hours period, much to chagrin of my fuddy-duddy wife. While I've always been a person who likes to entertain ideas outside the realm of what normal people consider, when you work third-shift like me ruminating about the fantastic or improbable has the added effect of keeping my mind entertained.

Now, I also have to admit I'm particular about what I get metaphysical about, I don't waste my time on things like Bigfoot, alien abductions, UFO's that fly around trailer parks, anything about a literal Atlantis, or supernatural entities that terrorized little children and ruin real estate values. Long story short while I camp out in left field, most of my brooding is firmly on scientific grounds. I could carry on ad nauseam about my favorite subjects, like the possibility of life existing in the watery ocean under the ice of Europa, one of the moons of Jupiter. Another favorite is the future of Artificial Intelligence and how I'm ready to vote for a sentient computer to be president as opposed to the thing now living in the White House. And while I cringe when some bonehead brings up UFO's, I am always ready to discuss the current ideas about extraterrestrial intelligence and why Fermi's Paradox raises the hairs on the back my neck. PLEASE, someone ask me why Fermi's Paradox bothers me far more than it should. But remember I'm weird, marooned in a boorish suburban hell, and have no real life so my answer will be long, convoluted, and lean towards the fantastic.

But all that is for another day, right now I want to ponder the accomplishment of the Voyager 1 probe, which not only passed the forty year mark in its mission but is now the first human-made object to enter interstellar space. Launched back on September 5 of 1977 it flew by both Jupiter and Saturn before heading out into the abyss.
Due to a rather rare orbital aliment of the gas giants the planners back at NASA were able to leave the Voyager 2 probe the option of swinging by Uranus and then Neptune. For those not up on the orbital mechanics of “planets”, Pluto wasn't included on the Voyager Grand Tours because it simply wasn't in the proper position.

Which was all good because it allowed the wizards at NASA and the Jet Propulsion Laboratory to design, build, and then launch the New Horizons probe so it could specifically visit the little runt several years later. In fact during New Horizon's long voyage to its intended destination, the International Astronomical Union demoted Pluto from being a full-fledged planet to “dwarf-planet” status earning the the ire from its hordes of fans around the world while confusing the crap out of many Americans.

Personally, I think Pluto's demotion to dwarf-planet was a good thing. Any decent planet should be able to clear its orbit of all that primordial trash left over from the formation of the solar system. Then there is the fact that Pluto's orbit is highly elliptical, so much that it sometimes dips in front of Neptune's path. All told, I liken Pluto to the drunk, irresponsible redneck that moves his dilapidated trailer right next an upper-middle class subdivision. You know given this criteria, it suddenly just occurred to me that except for the dilapidated trailer and being a drunk, my neighbors could call me Pluto, or at least Ceres, another dwarf-planet that somehow sneaked into the better part of town.

Getting back on the proper metaphysical track, it should amaze every literate person that humans have made an object that is now sailing through interstellar space. The first reason for this is that it was only a little over a century ago that we hairless primates began making machines that could take us up just a few hundred feet into our own atmosphere. Yes, it will take forty-thousand years before Voyager 2 passes within a couple of light-years of a star (Ross 248) and then almost another three-hundred thousand years before it passes within four light-years of the star Sirius, but nevertheless a human-made object is traveling interstellar space. Given our rapid progress from primitive, propeller-drive aircraft made of wood and canvas to complex space probes speeding out of the solar system it isn't wrong to hope actual humans might be heading out to the stars at some point. That is if we don't destroy ourselves by allowing too many more delusional and narcissistic morons access to nuclear capable political leadership.

Which brings up the Golden Records each of the Voyager probes carry on board. Back during the planning stages of the Voyager probes a team a of scientists, lead by the great Carl Sagan decided to include a type of time capsule with each spacecraft should it be found by space faring aliens or even future humans. On these phonographic records are samples of music from around the world, greetings from different people in many languages, and different scenes of our planet. To help out any possible aliens or far future humans who might stumble across the Voyager probes the records are encased in a cover that gives “instructions” on how to play them as well as other nice tidbits of information about their planet of origin.

The mind blowing aspect of the Voyager probes and their golden records is that their expected lifespan is in the billions of years. While the chances of them being discovered by an alien civilization is so low it would be far wiser for a person to expect to win a multi-million dollar lottery, the Voyager probes are a testament to the vision and hopes of a difficult and troublesome species that on occasion could rise above its limitations. Needless to say, unless we Homo sapiens really clean up our act and get supremely creative, the Voyager probes could ultimately be the last thing in the universe that say we ever existed.

As someone who enjoys solitude way too much, I've got to say there is something chilling to think about all those countless millennia the Voyagers probes will sail through the void as our representatives. Makes me hope that one day some future intrepid human explorers will head out and bring them back home.
Posted by Beach Bum at 8:42:00 AM

At some point in the distant future, aliens are going to have a look at the stuff on that probe and say, "These people seem pretty cool. I'll bet they got wiped out by those jerks on the third planet from that little star who blew themselves up."

I've got goosebumps now. ...three-hundred thousand years before it passes within four light-years of the star Sirius... is probably just as hard to imagine for most people as the thought of a human walking on the moon was to people in the 1930's.

OK, I'll bite: why does Fermi's Paradox bother you far more than it should? (I see another blog post coming)

Space just boggles my mind - not just how big it is, it how it feels like time is just lost out there. How will we ever know if there really IS anything if everything is measured in hundreds and thousands of light years?

Harry: Yeah, long term survival for homo sapiens is a big guess. ***On another more down to Earth topic, how you holding up with all the flooding?

Pixel: Yeah, that is another post, but what I will say is that are more than a few real scientists who worry about something lurking out in the deep dark that doesn't like sharing the galaxy.

The Bug: Good question! All we can do right now is look and listen.

Wonderful thoughts and perspective and very insightful to read. Space is magical and one can only wonder all that goes on there. Greetings.

Every time I think about the Voyager probes, my mind feels like it's trying to crawl towards infinity. Good post.

On another more down to Earth topic, how you holding up with all the flooding?