How to Almost Screw Up a Vacation 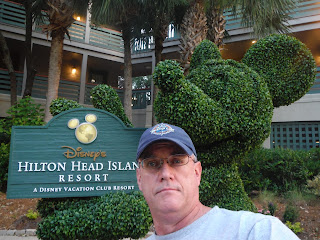 One of the sure fire ways to really dig deeply under my skin is to mess with my vacations. Frankly, few things anger me more than having someone or some unforeseen event even slightly threaten to throw a monkey wrench into a family trip that is always planned and paid for many months in advance. That being said, just yesterday I made a huge mistake that if things had gone just a little further sideways would have forced my family and I to cancel the vacation I am on now.

Actually this situation started about four months ago when I called the kennel my wife and I normally use to take care of our dogs when we are away. It's truly an excellent facility run in such a professional manner that no one would even begin to guess it is an old fashioned mom and pop operation. The sticking point though is that since this kennel is not some huge semi-corporate beast the hours of operation on weekends are short. On the order of two hours rather early in the morning and two hours late in the afternoon. The second thing signifying it's mom and pop status is that the owners do not have a true website, although they are mention, inaccurately, on a couple of webpages that include performance reviews. Here is where yours truly enters this potential cluster frak, and I'll be upfront and say the character flaw involved here is simple laziness.

For all intents and purposes my vacation started Friday morning with me leaving work. Now, the wife, daughter, and I weren't leaving for Disney's Hilton Head Resort until Sunday but as far as I was concerned that was a microscopically trivial point. So with my brain already kicked back and running on less than its already small wattage, I blew off my wife's suggestion Saturday afternoon to call the kennel and make sure everything was okey-dokey for tomorrow morning when we were going drop off the dogs and haul ass down to Hilton Head..

Instead, since I was already on the computer wasting my life watching You Tube videos and making snarky comments on Republican Facebook pages I decided to play the experienced internet wizard of the family and just look up the kennel's website. That was when I found the kennel didn't have a dedicated website but I did find them mentioned on the local chamber of commerce page, which included their weekend hours of operation that said: “9am to 6pm.”

Massive setup for a total disaster because I got up Sunday morning, did my relaxed two-cups of coffee routine and then causally ate a grossly unhealthy bagel literally covered in far too much cream cheese. Since my wife was still in bed somewhere around 9:20am I decided it was time to take the first dog down to the kennel. Our two canines children go absolutely crazy in a car so it's simply not possible one person to take both at the same time.

As you can already guess, I arrived at the kennel to find the place closed. Making matters so much worse just to the right of the main entrance was a sign clearly stating the weekend hours to be 7am to 9am and 4pm to 6pm. Yes, that was when a five pound lead ball suddenly manifested itself in my stomach. My mind immediately went into a panicked overdrive trying to remember everything concerning the kennel. The one really disturbing thought was a vague recollection of the owner telling me once that their policy was that you could only pick up your dog in the afternoon during weekends, not drop them off. Yeah, I called the kennel on my cell phone and only got the answering machine, with a message that clearly stated no one would call back until the place was open again.

Upon returning home, with the dog, my wife took the news of my frak-up far better than I believed possible. Since it was Father's Day she made breakfast and afterwards we went in a vegetative state watching travel shows on Amazon Prime until the kennel opened for its afternoon hours. All the while I was sweating bullets on the possible fact that my much desired and very much needed vacation might just become a stay-cation because I screwed up royally. So for me the hours slowly ticked by from morning into the afternoon as I waited for the disaster to become official.

My wife and I were out the door with both dogs and driving to the kennel around 3:45pm. The two high school kids employed were already there waiting for one of the owners to come unlock the doors. Wanting the uncertainty over, I came straight out and asked the kids if they let people drop off their dogs in the afternoon.

When both of the kids nodded yes, that five pound lead ball that had taken up residence in my stomach when this crap started immediately disappeared. I wasn't totally out of the woods yet, the husband of the two owners shows up a couple of minutes later on his nifty golf cart and unlocks the door. As the kids and my wife enter the building he looks at me with a less than happy expression.

“You were supposed to drop these dogs off this morning right?” He asks with me again becoming nervous.

“Yes sir,” I respond politely, “I totally confused the times.” The owner's questions didn't surprise me, the guys has impressed me many times with his ability to remember the names of our dogs and others who stay at his kennel.

“Did you leave a message on the answering machine?” He asks in a way that quite frankly scared me a little.

“No sir” I respond back honestly, “I did call this morning after finding the place closed. And I called a few times during the day in the hope I could touch base with someone and make sure I hadn't lost the reservation. But I never left a message.”

That answer seemed to satisfy the guy. “Yeah,” he said, “someone called this morning and said 'son of a bitch' on the answering machine before hanging up.”

“Well that wasn't me sir,” I said in almost 100 percent honesty. What I meant was that while I didn't directly say those words into the answering machine there is about a three or four percent chance I might have said something to that effect as I tried to end the call on my crappy cell phone.

I'm not complete sure the guy believed me, but frankly I didn't care. Because the dogs were checked in a couple of minutes later and after picking up our moody teenage daughter, something the law required my wife and I to do, I was doing warp speed down the interstate finally on full vacation status. Yes, I learned my lesson, next time I will definitely make sure all the proverbial ducks are in a straight row the day before we go on vacation.
Posted by Beach Bum at 2:52:00 PM

Hahaha! Yes, you have to be careful about answering machines. I have to listen to call center call recordings & I often hear very interesting things when people think they're not being recorded.

Hope you have a fabulous vacation!

Phew! Time to enjoy your vacation.

Make sure you bring back the guy a six pack of whatever he enjoys when you go to pick up the dogs.

That's wild to hear yoyr "yes sir" responses to the guy at the kennel. I always talk to people at businesses that way, but I also generally think, "If I was not young and female and 2 feet tall and brown, I could just walk in there and say, 'Hey, Bubba, here I am two hours late and this is how it's going to be'."

You certainly put a smile on my face with that story! You are full of surprises!