John Laurens--A True American Ahead of His Time 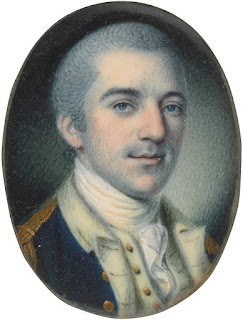 Anyone who has read any of my posts involving South Carolina understands I do not give this state much slack. My overall view of South Carolina is of a banana republic, corrupt, backwards, with a general population mired in a gleeful ignorance and a dog pack mentality. Yes, there are exceptionally brilliant and honest individuals from South Carolina who work hard to make the world a better place but, lets be realistic, they are quite rare.

Yes, by holding this opinion I am guilty of a similar intolerant and narrow-minded view I believe most of the general population of South Carolina has about anyone outside their worldview. Having spent most of my life in the state dealing with the people here, I am quite comfortable with my judgment.

As I wrote though, there are glorious exceptions and I just learned of such an individual. The trouble though is that he died at the tail end of the American Revolution.

John Laurens was born in Charleston, South Carolina in 1754, the son of Henry Laurens, American merchant, rice planter, slave trader, and fifth President of the Continental Congress. While Henry was typical of his times and place in society, his son was wildly progressive. John Laurens was an abolitionist, who had a plan to recruit slaves to fight for their freedom in the American Revolution as United States soldiers.

"We Americans at least in the Southern Colonies, cannot contend with a good Grace, for Liberty, until we shall have enfranchised our Slaves."

Gregory Massey, history professor at Freed-Hardeman University in Tennessee, wrote that what set John Laurens apart from others of his era what that black and white people shared a similar nature and could struggle for freedom together in a republican society. Quite frankly, I was blown away learning that someone in eighteenth century America held the extremely radical notion that black people shared the same humanity as us uppity white folks.

Of course you should realize that the current individual occupying the White House and many of his followers still do not truly believe that all men (and women) are created equal. Hell, the great thinker of Virginia, Tommy Jefferson, with all his eloquent and enlighten words falls hugely short compared to my boy, John Laurens, from South Carolina.

John Laurens wasn't just some desk-bound REMF- Rear Echelon Mother F*cker- during the American Revolution. He participated in the battles at the Coosawhatchie River and Savannah and Charleston. John Laurens was even taken prisoner in 1780 after the fall of Charleston.

Unfortunately for the new American Republic, John Laurens died in 1782 at the Combahee River in a skirmish with British soldiers who simply didn't know the war was over. Nothing substantial ever came of Laurens' desire to turn slaves into soldiers, simply put it was too extreme for southern society. Armed slaves, even in the cause of American independence from Britain, was a nightmare for the rich aristocratic planters whose money and power came from human bondage.

Professor Massey goes on to explain in his biography of John Laurens:
“Whereas other men considered property the basis of liberty, Laurens believed liberty that rested on the sweat of slaves was not deserving of the name.”

It's sad to say that John Laurens is by all rights no only a man ahead of his own time. But that even now in the twenty-first century his vision and understanding of our shared basic humanity is beyond the scope of many who live today.

On a side note, I cannot help but wonder what extraordinary enlightened individuals live today espousing views rejected by the mass of humanity as dangerous or ridiculous. But that in time will be accepted as being part of the natural rights of all free people.
Posted by Beach Bum at 12:31:00 PM

As a Tarheel, I've always referred to your state as the "lesser of the Carolinas" But I hadn't head about this guy. Thanks for enlightening us. I also didn't know there was a battle on the Coosawhatchie River--I love the name of that river and every time I'm running up I-95, think that it'd be a nice river to paddle (because of the name).

Wow, thanks for sharing this! I have no difficulty believing there have always been enlightened white southerners, and even a few in the North to boot. Someday, perhaps they'll have a voice.

I am reminded of Douglas Adams (when am I not?):

“And then, one Thursday, nearly two thousand years after one man had been nailed to a tree for saying how great it would be to be nice to people for a change..."

Very interesting! It's too bad that even now it feels like his views are in the minority.