When You Vote For Stupid, You Get Stupid 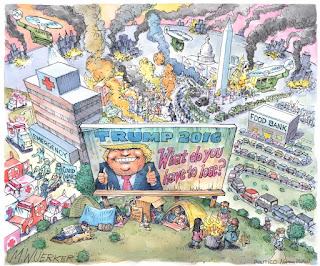 Okay, I fully realize that I live in bizarro, right-wing land where the rules of common sense and rationality have not only left the building but boarded a plane under an assumed name and fled the country. Case in point is one of my coworkers, an admitted extreme homophobe, he nonetheless swoons over Trump to the point homoerotic elements of his admiration more than occasionally creep into his lengthy praise sessions.

Exaggeration? No, not when he gets that awe inspired look on his face and consistently describes the Orange Buffoon as a “man's man who has done it all in life.” His adulation of OB gets increasingly weirder, given his homophobic views, that I often come close to laughing at the guy. Something I cannot do because open ridicule would probably cost me my job.

But the one common point this individual shares with other Trump supporters is the delusion that OB is a firm, commanding leader who doesn't apologize about America and its actions to the rest of the world. More to the point Trump supporters, of all types, seem to believe he doesn't take any shit from anyone and is a superb Commander-in-Chief looking after the nation's interest. However the reality of OB's true nature has once again become exposed to anyone with a microgram of rationality and objectivity.

Case in point is that the New York Times is reporting that American intelligence has become aware that the GRU, Russian military intelligence, has offered bounties on every American and NATO soldier killed in Afghanistan. The New York Times, further reported that the Orange Buffoon and his staff, including the Vice President, were briefed on this development in late March.

Now of course, Orange Buffoon supporters don't believe a thing coming from the New York Times. And I admit, the Old Grey Lady is screwed the pooch many times, but when it comes to who I believe in this surreal nightmare we've been living in since November 2016, I'm going with the journalists.

What once again reinforces the view that Trump is just a toady for the murderous thug, Vlad Putin is the confusing reaction from the White House staff. Latest blonde bimbo press secretary, Kayleigh McEnay say that neither OB or Pence have been briefed on this situation. While the Times goes on to say the White House held expanded briefings on the intelligence assessment and that possible responses include a sternly worded compliant to Moscow. Oh Hell, my bunny slippers just ran for cover.

While this is going on the Orange Buffoon is sending 200 American ventilators to help Russia with their Covid-19 outbreaks. Russian coronavirus cases neared 300,000 Wednesday, which is surprising because just a few weeks prior their news media was saying they had the situation firmly under control. In fact, before Russia finally admitted they were having trouble with Covid, several doctors mysterious fell out of hospital windows. The key point here is that each of these doctors attempted to inform the Russian public about the outbreak before the Putin government was ready.

So help me here, the Russia government is paying Afghan insurgents to kill American and allied troops. At the same time the Orange Buffoon is constantly talking crap about anyone in this country who dares to suggest we do not have the coronavirus under control.

You would think a strong, commanding leader would tell the Russians to, at a minimum, kiss our asses. Trump has said worse to our longtime democratic allies who have stood by us over the decades. Yes, you can correctly surmise that I am not a fan of Russia in any shape or form.

More to the point, Trump's infatuation with Putin is quite similar to my coworkers misguided affection towards him. Which given how Trump hasn't said a word about the bounties placed on the heads of American troops shows how his supporters don't have any clue about what it means to be patriotic. I am just so fraking tired dealing with idiots.
Russian intelligence officers Offered Cash Rewards To Taliban Fighters To Kill Us/UK Troops In Afghanistan.
US Sends 200 Ventilators to Russia As Crisis Deepens, Hopes For a 'Better Relationship'.
Posted by Beach Bum at 1:37:00 PM

Hang in there and be sure to vote in November, which can't come quick enough.