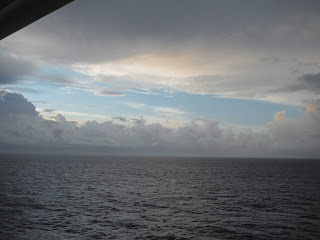 Like all good things, the beginning of the end of the cruise began after we left Cozumel. We were at sea the next day and I imagine most people were doing their best not to think about the impending return to reality. My wife and I staked an early claim to a couple of lounge chairs in the Solarium to read and relax. The seas that had been extremely rough the day before were still particularly bad with the water in the Solarium pool sloshing back and forth as the ship rolled through the waves. 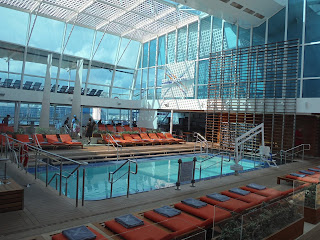 After several days of hanging out in the Solarium with all the blue-hair old folks, part of me wanted to head outside and get involved with the younger crowd. I was really enjoying all the quiet but after several days of it, part of me wanted something more lively in the way of stimulus. I did try to join the younger crowd but quickly rejoined the blue-hairs once realizing out out of water I felt. 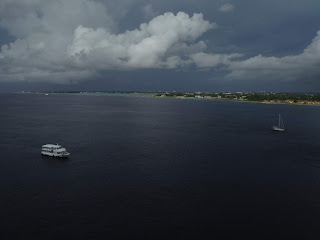 The final stop on the trip was Grand Cayman. While there is nothing wrong with Grand Cayman we've explored the place on previous trips and found it a bit of a tourist trap. The Equinox almost cancelled its visit on our trip because of the lingering storm. There are no port facilities on Grand Cayman forcing visiting cruise ships to anchor offshore, from there small boats ferry people to the island and back. Because we stayed on the ship here are a couple of pictures from previous cruises. 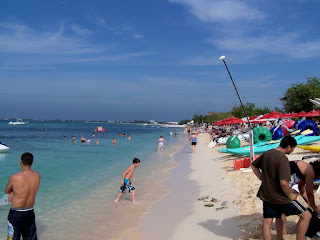 This is a small segment of Seven Mile Beach. It's a party place typically catering to young folks without kids. Going back to my dilemma of not being comfortable with the blue-hairs while being unable to keep up with the younger folks is part of the reason I stayed on the ship. 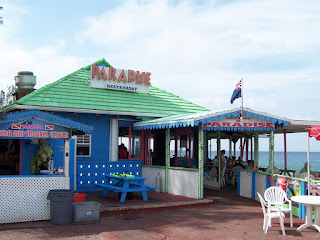 On the previous visits, the standard tourist spots like Buffett's Margaritaville was overflowing with Americans making them unattractive to me. My wife, daughter, and I hit this local spot and had a fantastic lunch with a genuine Caribbean atmosphere. 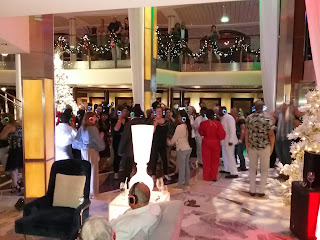 After leaving Grand Cayman the final night on the ship was filled with activities. This one was called "Silent Disco" where the participants wear headphones that provide three channels of music. The idea being that it allows people to dance to literally their own music. It was a bit freaky, but I found it quite fun.

Yes, I did dance that night with my music being the stuff on the Latin channel. 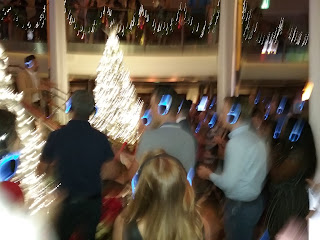 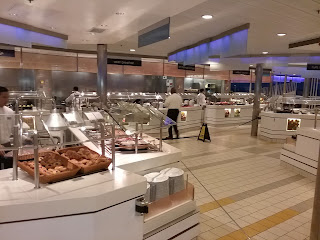 The part I miss most is the buffet. Especially early in the morning when most of the other passengers were still asleep. 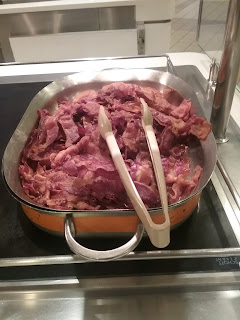 This is the final installment of these posts. For the longest time I wondered just what would be the last picture. I thought about posting one of the ship terminal with thousands of people either scrambling to get off the boats or begin their journeys. If you remember, I hated Fort Lauderdale and decided not to go that route.

So the last picture of the cruise is of a platter filled with bacon. Right now my wife is planning another cruise for 2021. Unfortunately, wifey is talking about taking her sister on a North Sea cruise that would include a trip into the Baltic and a stop at Saint Petersburg. Me going to Russia just ain't going to work for a whole bunch of reasons.

I still miss our ship's buffet too!

I've never been on a cruise and now that I'm a virtual bluehair, I guess I never will. I've added your site to my blogroll.

I am 100% certain the buffet would be my favorite part of a cruise vacation!

I'm with you on the tourist traps. When we were in Europe two summers ago, I tired of other travelers. It's always such a breath of fresh air when you can find a quiet spot among the locals.

strategy. I was made to believe my investment would triple, it started good and I got returns (not up to what I had invested). Gathered more and involved a couple family members, but I didn't know I was setting myself up for the kill, in less than no time all we had put ($820,000) was gone. It almost seem I had set them up, they came at me strong and hard. After searching and looking for how to make those scums pay back, I got introduced to maryshea03@gmail.com to WhatsApp her +15623847738.who helped recover about 80% of my lost funds within a week.