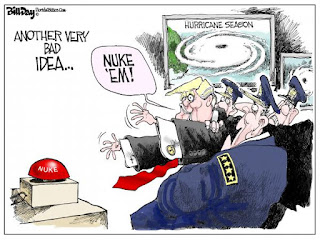 The one fact that I feel the average liberal/progressive consistently fails to understand is that Trump did not just suddenly appear. He is the head of a pimple on a national infection. He represents a seething underclass of barely literate and incurious individuals ever ready to bathe in their prejudices and irrational fears. Trump certainly doesn't have much intellectual capacity, but for years the bastard played this mass of proles like a master violinist making himself out to be a supreme businessman.

In the closing weeks before the November 2016 election the video of Trump talking to a dipshit entertainment reporter about groping women and forcible kissing them should have ended his campaign. After that video went viral I personally remember a Meet The Press episode where the host pretty much said a Hillary victory was now assured. In normal times such a revelation would have meant certain defeat and utter embarrassment for any public figure. But his flock of willing sheep stayed with him even though his personality and behavior violated every aspect of their supposed beliefs.

So that November night not only signified the election of man completely without any redeeming qualities but the final death of our assumed common decency. From there things have not only gotten worse but we all now live with the realization that our darkest nightmares about the fate the nation and world are possible. Curiously enough there is still a little room for the laughably absurd to creep into our minds like a tiny mouse crawling through duct work into our homes.

The recent Hurricane Dorian, yet another monster tropical storm whose parentage can be traced back to the obsessive burning of fossil fuels, spent the better part of last week tearing the islands of The Bahamas apart. For a couple of those days everyone living on the coastline from Florida to North Carolina waited nervously for the storm to finally implemented a northerly turn which could have put them in the tropical cross hairs.

Also during that time our glorious Pussy Grabber-in-Chief decided to cancel his trip to Eastern Europe so he could “monitor” the situation. Which meant him flying down to his golf resort in Virginia on Air Force One to chase his little white balls. Just right there we could talk about the violations of the Emolument Clause of the U.S. Constitution but I'm not big on dancing in the room of a patient in intensive care.

No, the new low point in Trump's reign has to be his idea about detonating nuclear weapons in and around hurricanes in an attempt to destroy them before they endanger the United States. The stupidity of the idea is only outweighed by the sheer ignorance it implies of the individual who suggested it. But for many, or if we're honest most Trump supporters such an idea fits their dim worldview dominated by action movies and an educational level that never went beyond technical school training.

No, don't get your panties in a wad, technical schools are a fine place to get an education that leads to a decent paying job. Four year colleges are expensive with many idle underachievers graduating with degrees in art appreciation and other fields with no real employment. And to go all Full Disclosure, I'm a graduate of a technical school and had conversations with graduates holding degrees in Political Science and French Literature as they delivered my pizza and served me breakfast at IHOP.

However, technical school institutions rarely require their students to take courses that prepare them for dealing with a wider world. Unless such students already have a working curiosity about something else beyond getting laid and their guns, technical schools at best turn out idiot savants. Highly trained individuals in one narrow field but unable to discern propagandized bullshit spewed by shallow, self-serving demagogues and the sycophants working for them.

Yeah, if I'm casting a far too wide derogatory net on working class folks, I'm sorry. It's just that I have to daily deal with such salt-of-the-earth, blue collar types and unfortunately have to quietly listen to their conspiratorial and tortured meanderings about all sorts of subjects. Such people use to be considered jokes, even by those who ran in Republican circles. These were the folks that wanted the United States to not only leave the United Nations, but expel the organization from the country because it represented a sinister attempt to undermine American sovereignty. Plus to them it was filled with all sorts of funny brown and black folks who should be ruled by the civilized white nations.

These days conspiratorial posturing about the U.N. has largely faded away to be replaced with the latest in the culture wars with right-wingers upset over things like gay marriage to the commie scheme to replace manly plastic drinking straws with wimpy paper substitutes. Reasonable people simply don't believe Vlad Putin over in Russia is a super-duper guy because the action movie star Steve Segal hangs out with the him. A radical departure from the days when the Right-wing masses cheered Rambo/Rocky during his civilization ending battles with the Red Menace. 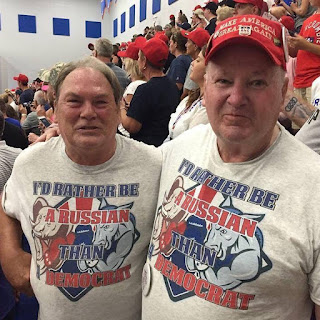 But lets not deceive ourselves, Right-wing admiration for Putin comes for the color of his skin and the fact that he makes supporting noises about protecting Christendom from its eternal enemy and stifling the nasty gays and their agenda. Trump supporters ignore his murder of journalists and his creeping encroachment on NATO countries. Oh, how I wish Zombie Reagan would arise from his grave and come straighten out his fallen flock. I would have added Zombie John McCain as well, but he's the one that started this hyper-batshit crazy era by picking Sarah Palin as his running mate.

The question that constantly plagues me these days is how low and stupid can Trump now go. His desire to throw nuclear weapons at hurricanes marks a new level of achievement in imbecilic mutterings that staggers the imagination. A science commentator, responding indirectly to the hurricane nuking idea, said that not only would detonating such weapons not have the desired effect but that it was the absolute best way to maximize the spread of highly radioactive fallout.

With Trump's good buddy, Putin hellbent on developing new apocalyptic nuclear weapons to destroy the United States, I'm sure the slimy bastard has passed this idea off to his collection of evil scientists living in their secret Siberian lairs. Oh, to return to the heady days of the early 1980's when I dreamed of the wonders the twenty-first century would bring like humans going to Mars and people starting to cleanup their messes here on Earth.

I watched the first part of that video - it's nice to know that science backs up my initial "oh my God NO" response to the nuke thing.

I think what makes me the saddest about this whole era is that while I knew there were folks like you describe out there, I thought they were a small minority. Heavy sigh.

This does explain why members of labor unions voted for DT. Ugh, will our nightmare ever end? I've been drifting between despair and anger since the election. Good point about the tech schools, however I think a world view education needs to start earlier than that, like grade school!

You mention Rambo... didn't I just hear something about him coming back and taking on bad dudes in Mexico. And poor Sarah Palin, her husband finally had enough even though the family never exactly displayed "family values." Good rant, but I don't think it is the best way to encourage the working class to "wake up" is to demean their intellect. And Trump, while no intellect, isn't dumb. He's smart enough to manage to play the system to maintain his "empire" through bankruptcies and to play to people's fears enough to be elected.

Amen Beach! I have long said that Trump is the symptom, not the disease. He is where he is, because he accurately reflects the beliefs and policies of the Republican Reich.

As for nuking hurricanes, I'd consider it if and only if the storm was over Mar-a-Lago, and he was there. ;-)

I shake my head so much every day...doing that just wasn't enough when the "nuking the hurricane" came along. My head was spinning, like in the Exorcist. That and the signs I saw leading up to the election, "Christians for Trump."

Hello What a miraculous work of great Amiso, i 'm Marvin Smith , my wife and kid left because i was having cancer of the body, there was no body to talk with, so i contacted Dr.Amiso and explain everything am passing through to him, he told me not to panic about the disease, he send the herbs and instruct me on how to apply it, which i did and the cancer is gone forever, also returned my family back to me. I told my friend Felix, that his wife is divorcing in 3 days time, he also contacted Dr.Amiso, low and behold his wife called the lawyer 2 days before the third day of signing the divorce paper and told him she is not divorcing her husband again, he should stop and cancel every document regarding to the divorce issue, believe me they are now living happily like never before. In case you are passing through marital or health problem kindly contact Dr.Amiso on herbalisthome01@gmail.com

My Name is Bar Leo from usa, I wish to share my testimonies with the general public about what this same man i once saw on this forum called Dr.Agbazara of AGBAZARA TEMPLE has just done for me , this man has just brought back my lost Ex husband to me with his great spell within 72 hours. I was married to my husband Alana Evans, we were together for a long time and we loved our self's but when I was unable to give him a child for 4 years he left me and told me he can't continue anymore then I was now looking for ways to get him back until i saw Dr.Agbazara contact on this site about his powers. Please do also contact him in any problem you are passing and see for your self on: