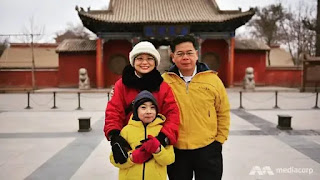 From my viewpoint the world geopolitical situation is one huge alleyway dumpster fire that threatens to engulf surroundings buildings. Yeah, I fully understand that its been like that since history began. The difference from the vast majority of what has gone before being the nearly eight-billion humans now living on the planet and a whole host of apocalyptic weapons that could sterilize everything down to bacteria. Not that there isn't beauty, wisdom, kindness, compassion, and a little hope going on all over the place, its just that the blazing dumpster tends to over shadow the tiny flower growing from a crack in the sidewalk.

About a years or so ago my wife and I stumbled upon a video showcasing disabled kids living in Chinese orphanages. Being that our daughter was adopted from China, we know more than the average people about the conditions these kids have to overcome. What we learned about one small boy though broke our hearts.

Wu Keyuan was born without ears and was seven years-old at the filming of the video. We quickly learned that airplanes were his favorite thing to draw because that was what his mom and dad would use to come get him and take him home. What tore me to shreds was that past a certain age China doesn't let orphans get adopted, and that Keyuan was already past the point of easy placement for kids with no disabilities. But in the video I remember Keyuan repeatedly saying that he had to “Be patient,” that his parents would come.

It didn't take much to realize that Keyuan probably learned that response from an overworked staff dealing with more kids than they had energy and time to give. The image of little Keyuan stayed with me until I googled, “Chinese orphan with no ears” last week and learned some happy news.

A couple living in Singapore saw Keyuan and having already raised three other boys more or less moved both heaven and Earth to bring him home. As a parent of an adopted child I realize that there is no clean, happily ever after. The trauma of being an orphan and leaving his friends behind will be tough on Keyuan. Then there is his hearing disability which will require numerous surgeries to correct and years to recover. But with a family now to support him just maybe things will work out.

With the world going to shit and powerful men doing their best to make it worse, I'll take this one ray of hope as a sign things might one day get better for us all.

China orphan who broke our viewers’ hearts finds a home, 4,500km away in Singapore

Eight-year-old Keyuan is spending his first Chinese New Year in Singapore with his new parents - who fell in love with him after watching a Channel NewsAsia documentary on China’s unwanted children with disabilities.
https://www.channelnewsasia.com/news/cnainsider/china-disabled-orphan-keyuan-singapore-adopted-alenah-9965340

BB -- thank you so much for sharing this. It made my day/ month!

Glad there are still good stories and happy beginnings out there (I had written "happy endings" first, and then changed it).

I shouldn't have snuck on here at work to read this - teary eyed now!

What a wonderful story. Interestingly, our son is adopted (but not from China, from Utah) and his sister (who was born just after the adoption) seems to have many adopted friends including two Chinese young women. You’re right, adoptions do have their ups and downs!

Hello What a miraculous work of great Amiso, i 'm Marvin Smith , my wife and kid left because i was having cancer of the body, there was no body to talk with, so i contacted Dr.Amiso and explain everything am passing through to him, he told me not to panic about the disease, he send the herbs and instruct me on how to apply it, which i did and the cancer is gone forever, also returned my family back to me. I told my friend Felix, that his wife is divorcing in 3 days time, he also contacted Dr.Amiso, low and behold his wife called the lawyer 2 days before the third day of signing the divorce paper and told him she is not divorcing her husband again, he should stop and cancel every document regarding to the divorce issue, believe me they are now living happily like never before. In case you are passing through marital or health problem kindly contact Dr.Amiso on herbalisthome01@gmail.com