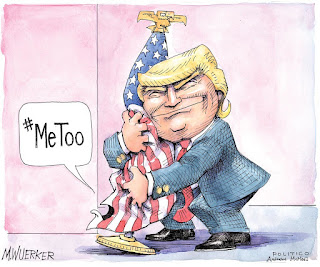 Above all understand that I have hated Donald Trump for years. Back when he described himself as a Democrat, every time I saw him on television the impression I came away with was of a degenerate conman suffering from delusions of grandeur. I never watched his realty show, but somehow video clips of it always ended up being featured on programs that marketed themselves as news programs. Even worse were his cameos in such diverse television broadcasts as “professional” wrestling and various movies. To me, all I saw was someone craving attention and glorification. There were several times his appearance on some programs were so weird that they left a bad taste in my mouth.

I'll give the devil some credit, for decades he played the media, both real journalists and glorified infomercial hosts, like Mozart played a violin. Trump is by no means a smart person but he does possess a low-grade cunning akin to what an alpha male chimp would use to take control of his group.

Trump crafted an image—or “brand”-that the semi-literate masses jumped on like flies to a fresh pile of shit when he entered the world of American politics. Trump learned to tickle the irrational fears and ancient prejudices of a group of Americans who have no desire nor apparent ability to adapt to a changing world they refuse even to try and understand.

His ascension to the highest office in the land was not totally a personal victory due to his talent for manipulation. The Republican Party sowed the field with decades of Orwellian doublespeak. Trump was just the final result from Tricky Dick Nixon's Southern Strategy when he sheared white folks away from the Democratic Party. Trust me, as someone who has lived in the South for the majority of his life, nothing scares the snot out of white people more than black folks wanting to have little things like justice and equality.

Conservatives like to joke about something called “liberal guilt” over the plight of African-Americans. To them, we liberals are supposed to be all tied up in guilt over black poverty and crime, which we dissuaded with welfare and food stamps. However nothing compares to the near unconscious but deep realization from conservative whites that they fear violent retribution from African-Americans over centuries of slavery and oppression.

The Democrats helped Trump into the White House back in 2016. The biggest hand they gave was deciding to have a civil war over political purity. Even when Trump was giving speeches clearly telling how much of a monster and potential dictator he would be in office, they couldn't unite to defeat the obvious danger. Secondly, the 2016 Democratic presidential nominee had more than enough political baggage to sabotage her own campaign. Lastly, the 2016 Democratic presidential nominee fell victim to the same mistake that defeated her back in 2008. She assumed that 2016 was her election, that she was owed the nomination and victory in November.

Now with all that history behind us, I regretfully have come to the conclusion Trump will more than likely win reelection in 2020. Yes, the Democrats took back the U.S. House in the 2018 midterms and are highly motivated to defeat the Orange Bastard but quite frankly they are their own worst enemy. With around a year left before the first caucuses and primaries the Democratic Party is already fracturing and dividing into bitter tribal cliques. That fact that there are over a dozen people who have declared candidacies for the Democratic presidential nomination only makes the divisions more acute.

As a Democratic, my personal philosophy falls somewhere between what is generally called a “moderate” and “progressive.” I know the United States is in some deep societal and economic shit but I do not believe the Utopian rhetoric that hard-line progressives preach will work. Yes, healthcare should be a right, human-caused climate change is real and dangerous, and some form of college should be readily available for kids but I do not necessarily believe Bernie Sanders nor Alexandria Ocasio-Cortez (AOC) have workable proposals. Frankly, I find Bernie about as detached from reality as Trump and suspicious on a number of fronts, while AOC plays fast and loose with basic facts.

To hard-line progressives, my humble and pragmatic stance makes me more of an enemy to them than the average Republican. But that does not take away from the fact that if the Democratic Party moves too far to the left it will certainly alienate moderates like me and, even worse, Independent-minded Americans. Progressives seem to have forgotten that right now the American economy appears quite healthy with record low unemployment and even some upper movement in wages. Even with Trump's corruption and personal immorality, Independents will not vote him out if the alternative is a someone the Republicans have successfully labeled a nasty socialist out to tax them into the poor house.

Of course, if the economy tanks or the Mueller Report hits Trump with clear and irrefutable evidence of working for Putin, all bets are off. Unfortunately, a recent NPR interview I heard with the lady running the International Monetary Fund has her stating there is no evidence of a recession taking shape in 2019 nor 2020. As for the Mueller Report, while I believe Trump is both a degenerate criminal and possibly working for the Russians, there is no certainty that any clear evidence brought to the public attention would destroy his 2020 reelection chances. As of this writing, certain United States Senators are working hard to prevent the Mueller Report from going public at all.

Many called the 2018 November midterms the “most important election in American history.” While true at the time, the 2020 presidential race will more than likely decided the fate of the nation. Trump wants to be a dictator, his existence is based on adulation and acquisition of power, especially to destroy anyone who hinders his goals. If Trumps gets another term, he will most certainly get to pick two more Supreme Court justices and hundreds of lower ranking judges. Trump's recent declaration of a national emergency to circumvent Congress is a full-blown constitutional crisis that he is certain to repeat the next time he doesn't get his way.

Just to show it can get worse, Trump openly threatened anyone who opposes his policies saying in an interview that he had the police, military, and “bikers for Trump” on his side and that it could get really bad for those of us on the left. That statement is an unbelievable degradation of civility worthy of a dystopian novel or third-rate banana republic. For years some right-wingers have expressed support for “Second Amendment” remedies so they can “save America” or “take back their government.” The vast majority of these idiots would never actually attempt political violence on fellow Americans. But that is underestimating the hardcore crusaders who finally have a leader that they believe would look the other way if he told them to act.

I personally know people who listen to alt-right internet news broadcasts and believe the insane conspiratorial crap they spew. All these individuals I know love their guns and think liberals want to ban Jesus and force their kids to become gay Muslims. I have heard them utter admiration for Trump to such a degree that it borders on religious worship. To them, Trump is a man's man unafraid to bust heads and do everything he wants no matter the consequences. They believe everything Trump says and instantly discount his moral failing and unethical behavior. If Trump told them to take to the streets they would comply and once this mob had assembled everything that happened next would be extremely bad.

Yes folks, the United States is standing on a cliff and staring straight down into a 2020 abyss. Given how stupid and selfish many Democrats and the nation as a whole can act, we may just decided to jump.
Posted by Beach Bum at 8:30:00 AM

So glad to have you back !! Sure have missed your commentary! Great post by the way, keep it coming!

I hope you are wrong. Like you, I always despised the man and his con-show. Reality TV that ain't real, who makes that stuff up. But people buy it. But then I read George Saunders "Pastoralia" which is a collection of Kafkaesque short stories and several of them resounded with the current political situation of the country.

The more Democrats who enter the race the more convinced I am that you are right. I was really hoping that Sherrod Brown would run - I think his platform (and white male image) might have been successful. It's all very depressing!

I feel your frustration Take care

Glad you're back to posting! And yes, there are times when I want to yell at the Democrats to get their shit together and put forth someone middle of the road, someone who can appeal to the regular, middle class.

Hello Everybody,
My name is Mrs Sharon Sim. I live in Singapore and i am a happy woman today? and i told my self that any lender that rescue my family from our poor situation, i will refer any person that is looking for loan to him, he gave me happiness to me and my family, i was in need of a loan of $250,000.00 to start my life all over as i am a single mother with 3 kids I met this honest and GOD fearing man loan lender that help me with a loan of $250,000.00 SG. Dollar, he is a GOD fearing man, if you are in need of loan and you will pay back the loan please contact him tell him that is Mrs Sharon, that refer you to him. contact Dr Purva Pius, call/whats-App Contact Number +918929509036 via email:(urgentloan22@gmail.com) Thank you.

Hi everyone, Are you into trading or just wish to give it a try, please becareful on the platform you choose to invest on and the manager you choose to manage your account because that’s where failure starts from be wise. After reading so much comment i had to give trading tips a try, I have to come to the conclusion that binary options pays massively but the masses has refused to show us the right way to earn That’s why I have to give trading tips the accolades because they have been so helpful to traders . For a free masterclass strategy kindly contact maryshea03@gmail.com for a free masterclass strategy. She'll give you a free tutors on how you can earn and recover your losses in trading for free..

Hello everyone..Welcome to my free masterclass strategy where i teach experience and inexperience traders the secret behind a successful trade.And how to be profitable in trading I will also teach you how to make a profit of $12,000 USD weekly and how to get back all your lost funds feel free to email me on( brucedavid004@gmail.com ) or whataspp number is +22999290178