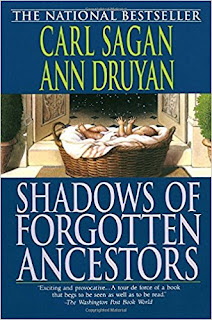 Sadly, calm and rational thought is quite rare in our society and culture these days. If anything, the country seems to be in a state of permanent tantrum with everyone from full-fledged adults to elected leaders acting like psychopathic five year-olds. During the times I begin to feel overwhelmed by such depressing examples of lowest common denominator human behavior I grab one of my books written by Carl Sagan.

It was during the early 1980's when I became aware of the now late Dr. Sagan when he appeared in his version of the Cosmos science series on my local Public Broadcasting Service channel. His explanation of the science of evolution, the efforts of scientists to expand human knowledge, and the wonders of the universe did more to shape my mind than any other person or idea. Needless to say, when the book version of the Cosmos series was published, I rushed out to purchase it at the local book store. Even now decades later that worn hardcover book is one of my prized possessions.

For me, Dr. Sagan's prose can take on the cadence of poetry with its easy rhythms that allow an open mind to look at the universe in a scientific fashion. While never being condescending to the layman, he nonetheless spells out that the universe and human beings can be understood without resorting to supernatural beings or grand conspiracies.

IMPORTANT DISCLAIMER: No, that last statement is not a jab in the eye of anyone religious. It's just that illnesses are caused by actual physical reasons like viruses, bacteria, exposure to toxic substances, or genetic mutations. Not because an evil spirit or demon invaded Aunt Agatha's body and gave her cancer. And that while Lee Harvey Oswald was a delusional A-hole, there is no evidence that he was part of a conspiracy involving Vice President Johnson, the Russians, the Mafia, or even time traveling humans who wanted Kennedy dead for some cosmic reason. Yes, that last one was a headline on a now defunct tabloid several years ago.

In an effort to ground myself and ignore the unrelenting rage that seems to dominate life these days, I picked up Shadows of Forgotten Ancestors, a book that Carl Sagan wrote with his wife, Ann Druyan, back in 1993. In that book Sagan and Druyan trace the development of life from the beginning of the Earth and onward to the arrival of Homo sapiens.

They argue that our species worst traits like territoriality, fear of the stranger, greed, racial and ethnic hate, and all the rest are elements of a survival strategy used by many other lifeforms. In fact, they delve deeply into levels of consciousness exhibited by other animals making a convincing case that it is a “difference of degrees rather than kind.” The problem though is that while those primitive traits helped the small bands of human hunter-gatherers struggling to survive, we have now crossed a line that requires our species to supersede our baser behaviors.

Like Sagan's other works Shadows of Forgotten Ancestors is a journey that delves into history and philosophy, and even biographical segments. Some have criticized it as meandering but for me it's food for a weary soul who thought by the twenty-first century humans would be further along than the news suggests.

Not to be pollyannaish, but it does end on an upbeat note. Humans have made great strides in the last couple of centuries. Sagan points out that chattel slavery, once justified as natural by both secular intellectuals and religious types has largely been wiped off the face of the planet. He also explains that our species is in the process of shedding other darker aspects of our nature. Almost seeming as if Sagan foresaw our current predicament after 2016, he explains these efforts to rise above our darker traits are tentative and need to be carefully cultivated. Needless to say, Shadows of Forgotten Ancestors is a testament to the better angels of human nature that I highly recommend.
Posted by Beach Bum at 6:39:00 AM

You definitely have me interested in this book now, a very interesting review on the subject, I think a lot of people can relate to this one.

Now to speak on getting a swat in public, I too was raised in South Carolina and received my share of swats, and not only by Momma but also by the Grandparents or anyone who caught me doing something wrong, I was never abused and I truly believe that if people would go back to swatting their children when they misbehave rather than overlooking it, that a lot of problems in our society would be lessened.

Would you say that Sagan was a Hegelian, with its view of continued idealist progress?

Raised just north of you, in the Greater Carolina, I too received my swats and the imitation of a nuclear meltdown is a good description of a kid losing it in public.

Jimmy: It's a deep but enjoyable read.

Sage: Oh no. In my mind I believe Dr. Sagan realized that the human species could just a likely commit collective suicide as mature and then build starships that would allow us to explore the galaxy.

I can relate to losing yourself in a book to "ground" yourself, as you so aptly put it. My favorite book as a kid/teenager was the world atlas. I still have the one I got in 5th grade. It looks like hell and it's totally out of date, of course (countries have changed, walls have fallen, and borders disappeared or appeared since then), but I hang on to it.

There's something soothing about a scientist who calmly speaks with reason and authority. One of the reasons I like my bosses so much.