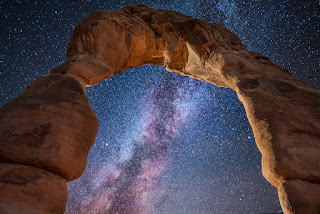 One of the few advantages I had growing up in a semi-rural area of coastal South Carolina was the relative darkness of the night sky. Up until the early 1980's it was possible to step into my grandparents' backyard at night and be able to see the wispy Milky Way stretching across the vault of heaven. For a science/science fiction nerd like me the sight of all those stars made any human-made art, both religious and secular, pale into utter insignificance. Adding to that sense of wonder, with just a pair of WW2 surplus binoculars, I was able to see Jupiter as a tiny disc with its four major moons as pinpricks of light dancing around it.

It was during those quiet nights of observation, I would wonder about what planets might circle those nearby, but impossibly distant stars. Better yet, fed from a growing number of science fiction novels and movies I imagined all manner of strange intelligent species that just might have individuals looking up into their own night skies and ponder about who they might share the galaxy with. This during a time long before the actual discovery of exoplanets and with some astronomers still speculating that planetary formation might be quite rare in the greater universe. 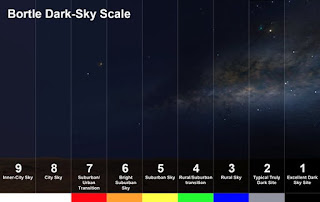 Literal decades have passed since I have been able to satisfy my innate desire to stargaze. The culprit being light pollution caused by massive urban and suburban sprawl. In fact in the mid-1990's my wife bought me a fairly decent telescope with hopes that I would use it in our own backyard. But after a couple of tries it became apparent that light pollution from homes, street lamps, and even the nearby city made any acceptable viewing impossible. Yes, I looked into joining the local astronomy club but I couldn't juggle the demands of a newborn baby, required overtime at my civilian job, and National Guard duties with the nights that group got together.

So that telescope ended up being stored in the attic and more or less forgotten about until it wound up being sold at one of my wife's yard sales. She never could understand the concept of how light pollution screwed with nighttime viewing. Then there was the nasty fact that suburban inhabitants start to get nervous when they see someone in their backyard with a telescope. Most people are so disengaged from the natural world they find it exceedingly difficult to understand that looking at the stars is an actual pastime.

At least my wondering about other intelligent species on planets circling nearby stars has been answered to a certain degree. Decades worth of SETI scanning of nearby stars strongly suggests that there isn't a technical civilization in our immediate area. Carl Sagan pretty much quashed the idea that there could be two intelligent species with a similar level of technological achievement existing “close” to each other. That a whole host of factors would assure that one species would be far more advanced than the other. That means that while there could be an intelligent species existing on a planet orbiting any number of Sun-like stars in our stellar neighborhood, they're probably still figuring out how to make fire, at best.

Yes, there is a remote, non-zero, possibility an incredibly advanced alien civilization might live nearby but there isn't any evidence of their existence. No Dyson Swarms of solar collectors orbiting the home star soaking up free photons, no laser beacons flashing out “here we are” in an attempt to get noticed, and no simple radio or embarrassing television broadcasts leaking out to the galaxy. You can endlessly speculate about hyper-advanced technologies like the fictional subspace for communications or that they are hiding from us using cloaking devices to avoiding upsetting the primitive and irrational hairless primates. But along those same lines you might as well hypothesize about a real Santa, Toothfairy, or Easter Bunny.

Don't get me wrong, while UFO's are a total nonstarter with me, I fully believe that alien civilizations do exist somewhere in our galaxy right now. The last reasonable article I read suggest that after crunching the numbers the nearest one is probably under two-thousand lightyears away. I don't have any idea how many stars exist within that distance of Earth, but within just fifty lightyears there are 133 of various magnitudes.

But even with suburban stargazing ruined for me, there is a way I can get my dose of awe and wonder about the universe. Occasionally amongst my aimless drifting on the internet, I will find a picture that metaphorically blows me away. One of the best is below and it's a panoramic view of the Andromeda galaxy. It's a spiral galaxy like our own and is “only” two-million lighyears away.

I can look at this picture and once again wonder about intelligent creatures two-million lightyears away sitting in their home looking at photographs of our galaxy wondering if anyone lives there. Before anyone flips out, yes, the light we see from the Andromeda galaxy took two-millions years to reach our eyes and electronic detectors. So we're essentially looking that far back into the past. But with that much real estate you got to wonder that at least one of those stars hosted the evolution of an intelligent species.

I live in one of the biggest cities in the country, right smack next to downtown. That means I can see a grand total of something like 6 stars most night (I am not exaggerating).

But my grandparents once lived in a rural area of Louisiana (I was in my twenties) and a couple times, as I snuck out of their house for a cigarette when everyone else was in bed, I was blown away by what i could see in the sky.

Your post left me with an impression that some kid somewhere on Earth is going to get in trouble someday for shining a laser pointer straight up in the air and blinding an alien astronaut.

When we lived in Ohio I wanted to go find some rural cornfield & lay down in it at night to get a good look at the sky, but we never did. Probably because we were afraid the farmer would take exception to the idea.

Harry: The next phase of SETI appears to be the search for ET's literally shining a really big laser at different stars in an attempt to get noticed. Not a Death Star-type of laser just a really big laser pointer. So you weren't far off with your comment. Laser communication can squeeze a lot more data into a signal as compared to radio.

The Bug: While in the active army at Fort Irwin/NTC, I got ahold of a night vision device one time and was able to use it to look at the stars. Since we were out in the desert and a couple of hundred miles at least from LA the viewing was already awesome. The night vision device was spectacular icing on an already grand cake.

I remember looking up and seeing stars in the sky as a kid and how awesome it was. But, like you said, it's been decades. I have friends who go hiking in sparsely populated areas out west, and they report of those great views of the night sky.

Supernatural is gonna draw the obvious X Files comparisons so we might as well get them out of the way now. Its stars are an intrepid duo who travel across America encountering all manner of paranormal phenomena and mythological creatures. happy death day imdb It has a lot of ex-files staff too which is apparent if you have watch both shows pretty closely.

Supernatural isn't as smart as The X Files , nor is it as cleverly written. The X Files was ahead of the time in many ways and is still unique in others, in that it was a mature drama which took its subject matter very seriously. watch the devils candy free online It managed to blend sci fi and the paranormal skillfully so that you almost didn't notice the seams. Supernatural in a way is like The X Files - lite.

It knows what it is and I think is a more focused show then its predecessor. From the get go it lays it out to you that it is situated in a world where ghosts, demons and witches really do exist. Once that is established its on with the show and there is no looking back whereas the X Files constantly had the viewer questioning and thinking about what he was seeing and hearing. Where The X Files was the thinking mans science paper, Supernatural is a camp fire ghost story. watch Avengers Infinity War online


Which is more then fine by me. As a lover of ghost stories myself Supernatural makes for fantastic viewing. Its strongest points are its atmosphere and visual imagery. The storyline surrounding the brothers relationship to their father and to each other is in its fledgling stages and will no doubt become stronger over time. Already though it is fun to watch the interplay between Dean and Sam. Happy death day 2017 being the older brother in a family of two myself I find myself sympathising with Dean. Not just because of that but also because I find his personality something I can relate to. His is very Mulder-like in his often whimsical approach to situations. The other brother Sam I find downright annoying at times with the overplayed teen angst.