We're All Residents of Omelas 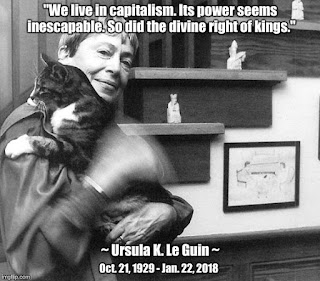 Over the years numerous works of fiction I have read have left a lasting impact on how I look at the world. Not sure what this might suggest about my reading comprehension or general mental ability but quite frankly even though the subject and circumstances are still remembered, I have forgotten the authors and/or titles on some of these works. The best way explanation is that when I see a similar situation in real life through some torturous route in my miswired brain, I am able to recall the plot of some novel or short story from years ago. I tend to think of it as an emotional echo since these works hit me on a gut level.

That is not the case this time after hearing about the recent passing of the famous Sci-fi author, Ursula LeGuin. One of her pieces of fiction entitled, Those Who Walk Away from Omelas seriously overturned the very basic foundations of how I view human interactions and even how our civilization works.

Those Who Walk Away from Omelas is generally classified as a short story but upon a little Wikipedia-based research it can also be called philosophical fiction since it doesn't really have a plot and deals with the price people will pay to live in utopia.

Like most of the utopias I have ever read about there is one huge catch. The price for all this abundant happiness and spiritual contentment rests on the misery of one young child. Le Guin makes sure the reader understands this happiness includes everything from the wisdom of their scholars, the amount of food they harvest, and even the good weather. This child is kept locked away in a dark, tiny room in the basement of one of the city's buildings living in filth and fear. The unnamed narrator telling us the story says the child is about ten but looks younger because of malnutrition and neglect. Even worse, the narrator explains the child didn't always live in that room. It remembers sunlight and the reassurance of it mother's voice. Occasionally the child will cry out saying, “I will be good” and “Please let me out” suggesting it has no idea why it is being treated that way.

In what seems a well established ritual, once the inhabitants of Omelas reach a certain age, between eight and twelve, they are brought to see this child who has to pay the price for their society. The narrator explains that those being exposed to the child are at first shocked and sickened by what they see. They want to help the child but the city elders explain that the minute that happens all the beauty and abundance of Omelas would “whether and be destroyed.”

Conservatives have tagged the term “social justice warrior” as a dirty pejorative, at best comparing it to the old bleeding heart liberal who has more heart than sense or at worst something akin to being a traitor. The reasoning for the latter being that in their minds America is Awesome and anyone who dare criticize society is a commie/atheist out to tax them into slavery, take away their guns, and force them to accept all manner or hideous progressive ideas. Assumptions are bad but from what I heard from such people they generally assume poverty, and the misery associated with it, is the result of laziness and bad character.

For those reasons, whenever Those Who Walk Away from Omelas crossed my mind for whatever reason I tended to lump conservatives in with the hippy-like inhabitants of that fictional Utopian city. Something I am sure they would not like since that while Omelas has plenty of pot, beer, and free sex the lack of any need for weapons would drive them insane.

It took me time to climb off my liberal high horse and realize that everyone in the United States and even all the inhabitants of the posh and overweight First World nations have accepted a Omelas-like deal to keep our way of life. The first example that comes to mind is the ubiquitous smart phones we love, which are made in Asian factories that unless things have greatly changed are not far removed from concentration camps. The same can be said for the other cheap junk like televisions and countless other pieces of consumerist crap which sends Americans into near riots on Black Fridays sales after Thanksgiving. We all bitch about good paying American jobs disappearing but freak out at the idea of paying a worker here in this country a livable wage.

In more general terms, we all have come to accept poverty all across the planet and the sad plight of refuges who have fled their war torn countries due to the machinations of powerful men playing their geopolitical games. A starving kid in South Sudan might move a few to donate money to an international charity. And the average person might feel bad for the Arab family risking drowning in a leaky boat fleeing ISIS terrorists and bombs being dropped from Syrian and Russian jets, but do not bring their asses to America. Those terrorized Muslim children might shoot up classrooms, stores, and outdoor concerts when they grow up. We have more than enough heavily armed Caucasians doing that already.

In an effort for full disclosure, I'm not leaving myself out of the criticism. My wife and I regularly give to charity and come close to shedding tears at the plight of the oppressed. But in all honesty, we should be doing far more. But like most of the citizens of Omelas, they know about the plight of the small child but have come to accept it as the price of living. I will give myself a little credit, there are times I am overwhelmed by the despair and greed that runs rampant in our world. The urge to leave this shit behind and just walk away seems like the only responsible choice to maintain sanity and avoided being tainted by the worst aspects of human behavior. The problem though is that there is just really no place to go.


Certain philosophers and idealists throughout the ages have asked the question just what would a mature and responsible human civilization look like. The easiest first sign of just such a stage in our development would be the realization by the majority of people that allowing the exploitation and suffering of others is intolerable. That while utopia isn't really possible, to deny the basic needs and freedoms to anyone is a crime akin to cannibalism. No, I'm not expecting such an awakening to happen anytime soon. In fact, if you want to know the truth, so far all signs suggest our species is moving in the opposite direction.

Agreed - I feel bad for refugees & those in poverty, but I don't want my comfortable way of life to be compromised. I'm definitely a hypocrite!

A thoughtful post and I now want to read that short story piece. And yeah, I’m too comfortable to want to do much of anything...

The Bug: While the history of the Great Depression is not one of my favorite eras, from what I've read there appears to have been more compassion by those generally unaffected by it. I don't believe in the idea of everyone just tossing their lives away to save the world. But in this day and age far too many people do not want to help.

Sage: It's quite short and can be found free on the internet. I scanned over it again while writing this post.

Thank you! Can I re-post at my place?

Also admitting to being a hypocrite here. I shut the quiet little voice inside me up by telling myself that I do more than many others, and that I'm far less of a consumerist that many people that I know.

Off to google the story now.

Pixel: Yeah, I'm not a good consumerist either. A coworker took great joy in showing off the Rolex watch he got just this last Christmas and came away dismayed that I was unimpressed. I just don't see the purpose of paying really big bucks for a watch, especially when the main idea is just it show off to everyone else.

For reasons that are too complicated to explain, I now feel bad for being a bit of an A-hole about the guy's watch.

A pretty good read, Bum. One of the things that I brought up to folks, whether in chat socializing or even on my blog over the years. Is that I can not find no reason whatsoever, that you have to have poverty or even extreme poverty to have capitalism ... period. Yet, it seems like so many folks, not sure why, maybe just institutional programming, religion, politics or whatever ... seem to thing that poverty is a necessity to have capitalism. Just never made any sense to me.

Actually, looking at the math and design of capitalism ... it should ELIMINATE poverty .... NOT create and INCREASE it.