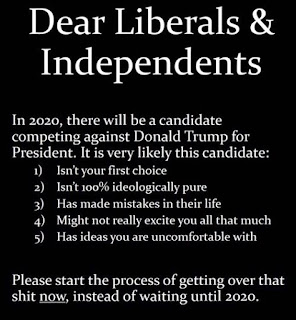 Despite the obvious benefits of democracy, there has always been certain flaws inherent to any government trying to practice that system. According to Plato in his Dialogues, his mentor the great Socrates asked the question that if you were about to take a long voyage on the ocean who would you want to be in charge of the boat? Commonsense should suggest that the people about to take such a trip would want someone qualified in such niceties as practical sailing, the finer points of navigation, the know-how to repair whatever vessel they are taking, and lets throw in knowledge about weather.

Socrates' response was to further ask the question why then do we let just anyone vote? Voting shouldn't be something we relegate to intuition, or to some fanciful whim based upon a public who really doesn't know their heads from their collective backsides. Voting should be an educated skill and letting people elect leaders without the proper knowledge of government and current events is like making a washed up, semi-senile rock star the captain of a massive cruise ship about to go from San Francisco to Sydney. (I bet you people thought I would say a delusional, lying, and narcissistic reality star who advertise himself as a businessman?)

Socrates' points notwithstanding, we've pulled that restricted voting scheme many times and all were blatant attempts just to oppress various minority groups. So, instituting a system where the average voter has to prove he or she isn't a blithering idiot just will not happen. More to the point, a bigger issue might be the simple fact that most people can't be bothered to vote on election day. For some the reason is that they can't make it to the polling place because of work or family issues. But others, for whatever reason refuse to take part in the very system that ensures their safety and well being.

The common complaint from a number of folks on my side off the political fence is that they refuse to elect a lesser of two evils, which they see as still evil. Nice logic for those who believe in unicorns that fart rainbows which smells like expensive potpourri. The problem for the rest of us is that we have to live in the real world and deal with the results of a delusional, lying, and narcissistic reality star/businessman getting elected.

To sum this short post up, since a realistic education test for voters isn't possible, people can bitch all they want about nasty, divisive politicians and the horrendous things they do in office. But unless more people vote and chose candidates who stand a realistic chance of winning we will continue our spiral downward into oblivion. Watch the video below for a more precise take on the issue.

This is a great clip. In America's defense (I guess), we didn't choose to go with the plebiscite like they did in Greece. The whole idea of representative democracy (and of course, we didn't even directly elect Senators in the old days) was that some things were one step removed. We elected the people who made the decisions rather than vote directly on every decision ourselves.

My favorite doctor vs. Sweet seller moment came in the 2000 debates and was about affirmative action. Bush attacked it, Gore quoted the Supreme Court case test that limited a.a. to very narrow circumstances. He quoted it! Bush replied with "Well, if affirmative action is what I said it was, I'm against it. If it's what HE said it was, I'm for it!"

Again, Gore had quoted the Supreme Court test for that sort of aa program holds constitutional muster. An educated populace (or candidate, for that matter) would have known that.

Great video! Sadly, there was a time in our history when they required test to vote and they were generally rigged to keeping one race from voting. It's hard to find a perfect world.

There is a fine balance between making sure that people know what they're doing, and denying people the right to vote. I lean a little more toward the former, though - at least in these crazy times!

I remember making the comment that voting should be easy - as in, vote by mail-in ballot for everyone - when my co-worker argued that no, voting should be hard and require knowledge and effort. Like The Bug said, there is a fine balance.

I agree, informed decisions should be made, I'd rather have someone who knows the issues going to the ballots than someone just randomly checking the boxes.

You make some great points here. I do think there should be some kind of pre-test involved for prospective voters though it may be difficult to get that legislation through congress. Your article is thought-provoking and Plato does raise some interesting ideas.

Socrates video was interesting, because I didnt know any of this. I understand what you are pointing out here. I been voting for 42 years now, I vote on every damn thing locally too, attended City Council meetings, every bond election, school upgrades, pay raises, city council race, etc. I really didnt have much knowledge of who I was voting for years back Bum, and just read popular opinion, newspapers, tele, etc ... so I over time got a little more enlightened I guess ... internet access has really helped me too, which I started on back in 2008, I never was online before 08. I would like to see more participation locally as far as my own community and Dallas, we seem to have a majority that lack enthusiasm, and many folks have told me personally, that it doesnt matter who wins, they're all the same, etc, etc ... as to why they dont vote. At the same time over the years, I have got many people to start voting who never have, simply by talking to them. Recently over the last month, we had City Council elections, 3 of Dallas' 14 districts had to later vote again in a run off, so I had to vote a couple weeks back and also last saturday again. My district 6 is a democrat and latino majority too, been that way for years, considered as West Dallas, I voted for former Monica Alonzo in the past, but this time I voted for her opponent Omar Narvaez (both Democrat), who was an outsider type, but also endorsed by the LGBT Voice of Dallas ... and I went with him, not because I dont like Monica though (I voted for her before, so I wanted to try something new). What was most disappointing to me Bum, is the turnout on local elections is so low, unbelievable for a city of this size (1.3 million in Dallas city, about 7+ million metro area). I dont know the reason, but it's alwayz like that it seems ... I strongly believe in serving local elections with strong voting voice, as much as national. As far as Trump/ tweety ... I frankly didnt know much about him, despite his popularity as far as his little tele show or whatever, I mean, I never watched it, or followed him much. Surprising to me I guess, is how many rural and middle America type folks actually voted for a guy out of the Upper East Side of Manhattan who lives in a joint like he does (not sure if you seen the inside of his highrise house, but personally to me, even though it is considered as top crust design or whatever ... it looks downright tacky as Hell). But I guess folks were so "hard up" for a non politician outsider of sort, they just went for whatever was available. I was a strong supporter of Sanders in the primaries, and planned on voting green in the elections, changed my mind at the last minute in line and voted Hillary. Enough from me ... thanx for the read and vid Bum.

Harry: I saw that debate myself. During both of Bush's presidential debates, first with Gore and then Kerry, he came out as the less educated of the two. I felt Bush's debate performances against Kerry were particularly bad. Voting issues aside, I felt Gore suffered from Clinton fatigue in 2000 while in 2004 the country was still reeling from the shock of 9/11. Kerry was also greatly hurt by the smear campaign begun by Karl Rove.

Truthfully, if the country survives Trump I feel history will record his victory coming more from the general distaste voters had for Hillary than anything else. The Russian hacking is scary but while I voted for the woman, I now realize Hillary was gravely flawed and running a campaign that mainly said vote for me because the alternative is insane.

That being said, it troubles me that since the Democrats are the only relative adults in a room filled with petulant and delusional children that even they can become distracted by celebrity. Hell, in the end I've become quite cynical about the fate of the United States.

Sage, Yeah, that's why I wrote that there is no way an intelligence/current events test could ever be instituted. I did see another video produced by the same people that speculated on how a truly just society could be formed. Totally impossible given that humans are involved but I do have an idea at how such an obstacle could be overcome. If I find the time that may be my next post. The only problem though is that my solution will sound even worse than letting a bunch of sociologists and philosophers have free reign.

The Bug: I saw a meme on Facebook right after the election that suggested we've taken the idea "that anyone can become president way too far."

Pixel and Jimmy: That's the reason why I feel our only real hope is to get more people to vote. If I have one belief in America, it is the idea that the majority of our population is more rational than the zealots that decide which candidates get nominated.

Masked Baron: Yeah, such a test would be nice but totally impossible.

Ranch: Yeah, it's depressing at how our country has such low voter turnout. It's often made worse by the fact that many just are not allowed time from their jobs to vote.