Tearing it Down Piece by Piece 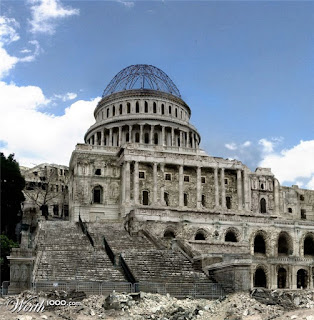 Before anyone starts freaking out and thinking I'm being a sanctimonious douchebag, I readily admit all politicians are often guilty of blatant hypocrisy. The only ready defense I have to offer is that the very nature of politics and events outside of government sometimes makes it unavoidable that people make choices that run counter to their declared principles. The problem though is when these choices are made to ram through narrow agendas that while preserving power for one group destroy the very foundation of American democracy.

Yes folks, contrary to all those idiots running around saying compromise is a betrayal to godly inspired principles, the world is far from a black and white situation. In a better world with a more rational electorate and honest politicians, each situation would be weighed and debated among elected leaders who could balance the needs of their constituents and political party with the greater good of the entire nation. My personal beliefs as of right now has me running fairly heavily in the liberal, slightly socialistic-inclined progressive of the American political spectrum but I realize absolutely no one ideology has all the answers. Any ideological group that claims to have all the answers are either fools or liars and the people that believe such crap are morons that shouldn't be allowed to vote.

It speaks volumes that the Founding Fathers of the United States Constitution established a framework for which debate and eventual compromise prevented the majority party from running roughshod over the minority party in Congress. Since the devil is always in the details, this wise precaution has also allowed a highly partisan minority party to stop legislation and judicial appointments dead in their tracks. Unfortunately, this is the train wreck we find ourselves now and I fear things are only going to get worse.

Depending on a person's politics the blame for this Congressional dysfunction will obviously go to the other party, But in truth, there is enough blame for this partisan bullshit for everyone to have a nice heaping share. Personally, I say it started back in the 1980's when Republicans began picking judges who were more ideological than practical. Of course, Republicans will counter that the Democrats started this ever escalating war with all the crazed liberals they started appointing to the benches in the 1960's and 1970's. For the Republicans the United States Constitution is something carved in metaphorical stone while for us Democrats it is a living document that must change with the times. Quite simply, from my point of view the United States of 2017 only bares the most superficial relation to the one that existed when the Constitution was first enacted. Such a huge difference in my viewpoint made the sixty senate vote majority for approving judges so important in crafting compromise.

Yes, the Democrats removed the sixty vote rule for judgeships below the Supreme Court when Republicans absolutely refused to fill the numerous vacant seats during the Obama Administration. But now it is as certain as bears taking huge dumps in the woods that the Mitch McConnell will lead the Republicans to end the sixty vote rule for Supreme Court justices so they can ram through Trump's pick for the empty seat. This after McConnell refused to consider the guy Obama nominated when the seat become open after the A-hole Scalia died.

It is true that the road to hell is paved with good intention and it is made even wider by those who rationalize choices made for strictly blatant political purposes. This slow but deliberate wrecking of the Constitution to secure a certain political viewpoint is a dangerous habit that eats away at the very premise of the United States. Like I said before, all politicians are hypocrites to a certain degree but there is an old saying about those who sow the wind will eventually reap the whirlwind. The Republican nominee up for the empty seat on the Supremes will be be approved this week. I just wonder how the Republicans will whine when they are in the minority and the Democrats ram through their own pick by a simple majority vote. It's no wonder that Churchill once said that democracy was the worst form of government, except for all the others that have been tried. To me this just proves that craven politicians and the idiots that vote for them are the true enemies to democratic self-government.

Majority Leader Mitch McConnell (R-KY) indicated Tuesday that he believes he has the votes to invoke the so-called nuclear option and eliminate the filibuster on Supreme Court justices, while also committing not to seek to dismantle the legislative filibuster.The Senate is heading toward a showdown later this week over the confirmation of President Trump’s Supreme Court nominee, Neil Gorsuch, whom Democrats have vowed to filibuster. Up until McConnell’s direct confirmation Tuesday that he had the 50 votes required—with Vice President Pence as a tiebreaker—to change the rules around Supreme Court confirmations, GOP leaders avoided answering the question directly and preferred to say that they had the votes to confirm Gorsuch when asked about the GOP whip count for the nuclear option.
Posted by Beach Bum at 6:49:00 PM

I worry. I really worry about everything now.

I've wondered if it might not be best to let Gorsuch pass as he can't be as bad as Scalia or Thomas... There are a lot of things I disagree with him, but I am pretty sure we're not going to get a candidate with enough common sense to realize that a corporation is not the same as an individual and therefore corporations cannot enjoy the same constitutional protection.

Like you said there is enough blame to go around, time to stop blaming and begin to work together no matter which party you claim....but I guess that makes too much sense, I know it won't happen but just my opinion.

I'm a Green, which means I insult the Democrats routinely for not sticking by their alleged principles.

But as I get older, I am starting to realize that (especially when it comes to legislative bodies), compromise is the way things get done. It's why Clinton got more of his agenda through than Obama while also passing some things that look bad in retrospect.

The Tea Party was created to fight compromise at all costs, and now that attitude is crippling the GOP now that they're "in charge."

I don't know. I'm no expert on any of this, thank God.

Tina Gilbert writes about the Tragedy of Estrangement (as it pertains to adult children and parents) but as I read her opening volley yet again I also recognize that it applies to this country, the people and the government and the numerous splits we now sit within.

An excerpt that rings true to our country and we the people too:

Since I can’t stand to hear your truth and you won’t hear mine, we can’t have a relationship anymore. And all because I love you so much that I literally cannot stand to know that I hurt you.
This is the tragedy of estrangement." ----- by Tina Gilbert.


Have we lost the art of compromise? There is no shame or loss in compromise.

It's so hard for me to think about compromise now since where the heck was all the compromise for the last 8 years? Why do we (democrats) have to be the grownups all the time? Ha! Of course, my side is full of angels & demons as much as the other side is. Sigh.

Pixel: Me too, current trends suggest the 21st century will be tougher than the 20th.

Jimmy: Personally, I think one of the biggest problems is that the desire for political power supersedes its real purpose to maintain and grow the country. Another thing is that Americans have become use to being kings of the global mountain. Such a mindset prevents individuals, groups, and whole nations from adapting to changing conditions. Like I said, neither the United States of the 18th century, nor the world as it was in the 1950's and 1960's when America was at its peak is the one we live in now. If Americans do not come to understand this fact we will be condemned to fall by the historical wayside.

Harry: Hate to say it but both those on the right and left who think its their way or the highway drive me crazy, Democracy can't exist without compromise. I have lost numerous liberal and progressive friends because their idea that, "The lesser of two evils is still evil." Clinton was a hugely flawed candidate but she would not have driven the country over a cliff like Trump is doing.

The Bug: Yeah, I agree. I was regularly disgusted with the way Republicans treated President Obama. In fact, several members of my family and I are not speaking because of a mutual distaste of each others politics. Yeah, the Democrats are the current adults in the political room because right-wingers are living of a climate of fear. On the other hand, getting our liberal brothers and sisters to stay focused and then out to vote on elections days is next to impossible.

No, I'm not an idiot that feels that compromise is "betrayal", but I'm also not an idiot that feels that if I dont compromise with someone stabbing me in the back, that I have one- way principles ... if I had reason to compromise and it was reasonable, I would. What we see in politics period is not reasonable, and I really dont care if they get a thing done up there for the next bloody damn 4 years, whenever they do get anything done or some "grand bargain", the majority get screwed somehow. And this new wave of Capitalism Hill neoliberalism, is playing itself out, with these 2 sides, in a competition to see who can kiss corporate mainstream asses better, and fall to their knees quicker, people are getting tired of this nonsense and good vs. evil games ... both these SOB's collectively aint worth a shit, especially the pay and benefits we give them. There is not even hardly any progressive voice at all, that isnt shut out, and only slight differences between this duopoly ilk, maybe on some social issues ... crap that big money dont care about, but use as a tool to play the masses. As far as for the democrats, I think they should be read FDR's letter to the democratic convention, 18 July 1940, that they never got, but sums up what they should be told. That's about it from my POV, have a good one guy.