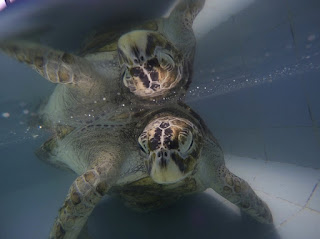 Omsin, the nickname for a green sea turtle living in Thailand that recently garnered international sympathy after it became sick from eating coins people tossed into its pool has died. This came as a surprise to me but apparently in Thailand it is believed feeding coins to animals is supposed to bring some form of good luck. As someone who has seen and read numerous examples of human stupidity this Thai belief isn't quite the worst, that would go to all the unthinking morons who litter beaches and the ocean with plastic trash. I've walked the shores of Hilton Head Island many times watching the sunrise while on vacation and ended up filling several trash cans with garbage casually left behind by people who should know better.

For that reason I'll cut the Thai some slack because the overly educated and wealthy professional types that frequent Hilton Head don't have to struggle with life like many in that Southeast Asian nation. But on the other hand for poor Omsin, the weight of all those coins cracked its shell and the nickel in some of the coins damaged its immune system beyond the point it could be saved.

Being a sorry-ass liberal tree hugger, it's not hard for me to make a connection between the life of a green sea turtle and us humans who seem hell bent on destroying ourselves and just about all life on the planet. It's almost as if our species has a strange desire to see how the surviving roaches, assorted slime, and bacteria might evolve.

The human inability to think beyond moment goes beyond destroying the ocean and the life that resides there. Unlike poor Omsin, an instinctual creature who should have been cared for better, we humans—especially Americans—knowingly stuff ourselves with crap that seems designed to bring on heart disease and cancer. Making matters worse, when the previous First Lady Michelle Obama made her cause getting kids to eat healthier food all the partisan fools started acting as if she was leading some nefarious evil crusade to bring down the Republic. Her cause was never to permanently band fast food and force everyone to become vegans, but many conservatives went all irrational claiming it was their God given right to engorge themselves with as much fat and calories as they can before falling over from a massive coronary.

One of the darkest comedic sights I ever saw was the former Alaskan Governor and one-time Republican Vice President nominee Sarah Palin stand up on stage and equate American freedom with the ability to chug down and extra-large soda from a fast food joint specializing in chicken sandwiches. Omsin didn't have a real choice in either her environment nor the bite-sized bits seemingly friendly people kept throwing her. While I am in no way a culinary saint nor health nut I am at least aware enough to know my rights will not be infringed if I occasionally chose a salad or the baked salmon instead of the gooey cheeseburger or pizza. Contrary to the belief held by many the thing called “commonsense” is severely lacking in both those who carelessly litter the environment while claiming to love the planet and those who guard their artery-clogging delicacies as much as their precious firearms.

From NPR:
A green sea turtle in Thailand that drew international sympathy when it emerged that she had consumed nearly 1,000 coins thrown into her pool has died.
The turtle nicknamed Omsin, the Thai word for "piggy bank," had an hours-long emergency surgery to remove the coins earlier this month. But she never woke up from a second emergency surgery.
Posted by Beach Bum at 5:11:00 PM

A turtle piggy bank? That's sick and so is the trash on our beaches (and highways)

At one point, the former First Lady indicated that she considered coming out against kids' health, just to trick conservatives into supporting it.

Peoplec can eat any dumb thing they want but they should leave the poor sea turtles out of it.

I never even heard this stuff before here Bum! folks think that feeding turtles coins will bring luck? ... I mean, I heard of shit like throwing coins into a fountain, for wishes, luck or something? (cant remember what town I was in when I seen that though). Nor did I hear, that Michelle Obama was criticized for having kids gardening, for fresh food? ... I dont know why? ... not unless the fast food industry got the red ass ... that's kinda dumb(?) You know Bum ... many folks will believe all kinds of nonsense ... after all ... humans think they're special ... like God's little personal Teddy Bears (As I think of it). I bet I could tell some guyz that "pissing on an armadillo will get you laid" ... and it wouldnt shock me, if a couple actually try it {:-) I cant say I'm a tree hugger ... however, I'm a little more strict when it comes to things like folks setting forest fires for fun ... I support the death penalty in some cases for the offense ... as well for these folks that cause things like the BP oil spill intentional negligence to save a few million bucks ... "death penalty", but these candy asses on the payroll in Washington wont let that happen, they're God's little precious trash too. Some may think that's extreme to a degree ... but I view it that way, but I'll leave it there.

So sad... One of the advantages of living where we do now is that there isn't any fast food nearby. Although I have to say that's not stopping me from eating junk. I need to get with the healthy eating program! I should do it in Omsin's memory...

I guess I hadn't heard about this sea turtle or that it died from eating coins.

It really bothers me when people throw trash just anywhere. What's so hard about taking it home and putting it in a trash bin or recycle it?

I try to eat healthy - operative word being "try." I frequently eat vegetarian meals (it takes 3,500 gallons of water to produce a pound of beef), though I'm not vegetarian and don't begrudge anyone their steak. But I remember the looks and comments I used to get in South Carolina when I ate a veggie burger or lentil soup...it was like I was dissing motherhood and apple pie.