The Odysseus to the Laundry Gods 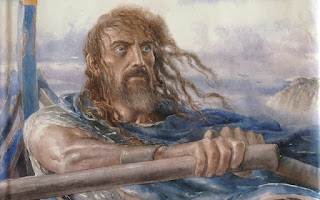 A true story, in some respects...

One of the marginal benefits of working third shift is that my weekend begins on Friday morning as soon as I clock out. So, with the other members of my family either attending school or at work during normal daytime hours, if I feel motivated enough I can use that same time to get certain tasks done without any of the usual hindrances. The one issue with trying to play Friday hero though is that sometimes I simply do not feel up to either the tasks or even driving around to the locations I need to be or the waiting that is involved in all aspects of life these days.


This past Friday was supposed to be one of those busy chore and errand days, so much that I had taken Thursday night off from work in an attempt to be rested enough that I didn’t feel like a zombie as I ran around town. I was off to a good start Thursday morning having gone to the gym after leaving work and then returning home to replace the bad door latch on the front loading washer.


The workout was nothing to brag about, both my wife and I are just now getting back into the routine with all the home renovation projects fast approaching completion. However, I was rather proud of the fact that I successfully replaced the defective electronic door latch in my washing machine. While the procedure on paper and You Tube video looked amazingly simply, there was one aspect that turned out to be a certified pain in the ass. It involved reinstalling a thin, spring-loaded wire band that keeps the door gasket in place while the washer is in operation. Getting the over a foot in diameter wire back into its proper place around the door gasket proved so frustrating I began to worry I might actually be forced to  call a trained technician despite the fact the guy who made the You Tube video explaining the procedure said it was possible.


Not having the washing machine operational during the normal family weekend laundry cycle would have meant my sorry butt spending the greater part of Saturday at the nearest coin-operated Laundromat. See, while the old door latch definitely needed replacing, if you whispered sweet-nothings to the washer while dancing around on one foot and then promising to make a sacrifice to the laundry gods, it might just engage and allow the machine to run. What this means is that I was going to take the washing machine fully offline in an attempt to fix an irritating problem we all had been living with for about five to six months. Failure could have come in the form or a broken wire band or a torn door gasket, both unfortunate possibilities since I didn’t order a replacement gasket and the new wire band sent with the new door latch was the wrong type. Thankfully, one of the laundry gods smiled upon my sorry ass allowing me to avoid both the ridicule from my loving family and having to spend time at the local laundromat which in all honesty is sort of a recruitment center for the local chapter of the KKK.


With a successful completion of the washing machine repair, I decided just to do laundry and chill out for the rest of the day while I basked in the glory of my accomplishment. I figured my other tasks and errands would wait until Friday morning. Funny thing about the laundry gods, they seem to be just as touchy and prone to bad attitudes as was Poseidon when he decided to screw with Odysseus on his trip home from Troy.


It was about two-thirty Friday morning when my brain’s internal sensors detected a disturbing issue in my lower torso region requiring an immediate run to the bathroom. To avoid further unnecessary and grotesque descriptions, I’ll just say the bathroom was where I spent the majority of the rest of that night and a good portion of Friday morning. Around sunrise the mild body aches I had ignored Thursday afternoon and evening, which I thought were from my visit to the gym, ramped up to about an eight on a scale of ten making me glad I had taken the night off. While quite uncomfortable, the two ailments I was dealing with during those early hours hadn’t truly beaten me. I had taken the required home medication and retreated to the couch to allow my wife to sleep. I figured I had picked up a mild bug from either work or the gym and would in the course of a few hours beat it back enough to at least get the in-house chores done once everyone left that morning.  A few hours after that idea the fever hit followed by the nausea and intense chills.


Before anyone assumes the worst, my wife did offer to stay home with me as I writhed in agony on the couch. At that time, I assuring her I would be fine and told her to go to work. She had several meetings to attend that day and a bunch of paperwork to complete. Had she stayed home, that would have meant her spending most of the day on the phone with numerous callers trying to get as much of her work done as possible given the circumstances. I simply didn’t want her having to explain that the moaning in the background these people would certainly hear on their end of the phone was her sick husband and not someone being tortured for information. Yeah, just call me a considerate and compassionate husband.


I figure it was around noon that I became conscious enough to realize I was going to need more drugs to tame my flu-like symptoms enough so I could rest. One problem though, when I tried to stand up I found that some entity had changed the law of gravity. Everything seems to be off about ninety degrees requiring me to literally crawl on the floor towards the bathroom. I actually found the situation quite funny, as did the various fictional and historical characters keeping me company during the point when my fever was hitting the high side of one-hundred and four. Both Jim Kirk and Ernest Hemingway told me stories of some of their wilder experiences as I slowly made my way to the bathroom where I left the ibuprofen and whatever anti-nausea medicine I had taken earlier.


This is where things go really weird because it was around two o’clock when I became conscious again and found myself back on the couch. The last thing I remember was reaching the bathroom and wondering how in the hell I would get the child-proof caps off the bottles.  While I still felt like watery baby poop, at least all my companions had decided to leave and let me rest. Damn Jim Kirk, he was supposed to tell me about the three-way he had with a couple of green Orion slave girls during his first five year mission.


What was even wilder, I found that gravity had returned to normal allowing me to staggering around the house zombie-style.  This was just in time to answer the knock on the front door which turned out to be the FedEx guy trying to deliver a package for my wife. Got to admit, I freaked the Fed Ex guy out when I opened the door, he didn’t quite know what to say when I asked him in all seriousness if he was a real person.


Epilogue
Eventually both my wife and daughter returned home and forced me to go to bed after drinking enough Nyquil to knock out a horse. When Saturday morning arrived I felt good enough to realize just how bad my situation had been the previous day. While I have exaggerated some aspects of that experience it wasn’t until Sunday morning that I felt I could keep anything in my stomach, even then it was a single piece of toast and some ginger ale. About the only moral to this story I can offer is that like Odysseus must have learned, never screw around with the gods, especially those overseeing the laundry.

Ugh...it sounds like you caught a really bad case of the stomach flu. Glad you're feeling better.

I'm in awe of your washer door fixing skills! I can relate to your desire to avoid the laundromat.

Pixel: Yeah, aside from my overly creative fictional extensions of what actually happened, that was a really bad day. As for the FedEx guy, that part is true, I wasn't really sure if he was real when I heard the knock at my door.

As for fixing he washing machine, installing the new door latch was literally just plugging it in with the connector then screwing it back into place. The trouble with the spring-loaded wire band is also completely true. As I mentioned, the true nightmare scenario would have been having the washing machine down for the entire weekend.

Ugh - that sounds terrible! In retrospect I think maybe your wife should have stayed home.

I got sick my first night at my dad's in NC last week. I blame a Wendy's hamburger that I ate on my drive down there. I hate feeling sick & feverish in someone else's home. No idea where the tylenol was. No idea how to get warm - until I remembered that my dad has one of those very fancy recliners that can dump you out on the floor if you need it to. It also vibrates AND has a heat function. Once I made my way there I was able to get warm & get some sleep. I was mostly fine the next day though. And I must say that as far as I know, no laundry gods were involved. Ha!