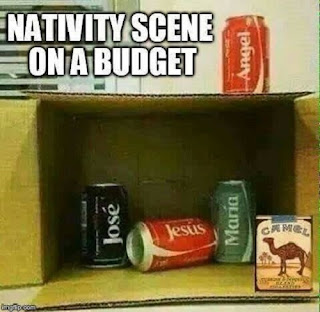 To say I am a bit of pariah in the area I live is a given. I don't attend any of the local mega-churches that act as religious country clubs where the majority of inhabitants go to be part of the accepted social set. I most definitely do not drive an oversized trunk which is a male status symbol in these parts on par with what guns you own as well as the required circular NRA sticker on the back window. While there are a few exceptions, my politics alone keeps me at arms length with otherwise nice people who view Obama as a tyrant and anyone not white and Anglo-Saxon as an invasive species. I will offer up a backhanded complement and say the centuries old suspicions about Catholics appears to be dead.

All that being said, it is this time of the year that one of my serious deficiencies shows itself to all the others who spend days, if not weeks, setting up Christmas decorations on the outside of their wondrous Mcmansions. I have never really seen the point of elaborate outside decorations. Of course, this is just a holiday extension of my distaste of yard work but it is also an expression of my dislike of light pollution and how it literally drowns out the stars in the sky. In an effort to not seem a total secular humanist douchbag, I do not harbor any contempt for those who do decorate the outside of their homes. As of this writing it is still a free country, although what happens after January 20 will be anyone's guess after that.

Where my family usually falls in line with everyone else is on decorating the inside of our house. My wife has three separate themed Christmas decorations boxes that contains items for the tree, the living room, kitchen, and even the bathroom. Frankly, I find the bathroom stuff ridiculous but it all makes her happy and while I'll never be confused with a rocket scientist, I have learned that it is best just to go along during this time of the year.

This year is a bit different though since we are in the middle of several major home renovation projects. With storage boxes literally overflowing and taking up a great deal of space all over the house there was simply no room to pull out the Christmas decorations this year. While this fact didn't sit well with my wife, this holiday sacrifice will be repaid with her eventually having new carpet throughout the house, along with new marble kitchen counters and revamped cabinets. On a side note, you cannot underestimate my happiness in the fact that the bathroom remodeling was largely completed a couple of weeks ago.

Now understand, to our far more holiday-minded acquaintances we haven't advertised the fact that we're essentially skipping Christmas this year. Our lack of outdoor participation has been mentioned in the past, which my wife diplomatically explained away as having more to do with the front of our house being a different design from most of the others in our neighborhood. We don't have a large front porch which is what most everyone else uses as the basis of their decorative garland, colorful lights, and tinsel ideas. I'm sure to our closer associates she has whispered that it's her damn husband's fault because he is a total scrooge.

From what my daughter has told me recently she has inadvertently revealed our non-participation in Christmas this year. It seems that during one of her classes just this last Monday the topic of Christmas decoration came up among her friends. The parents of all her close friends are Christmas decorating fanatics and the way my daughter explained it when she told them we didn't even have a tree up everyone was quite shocked. Making matters worse, given my known anti-social and leftist leanings beliefs, I am sure the assumption others will take is that I have gone total anti-Christmas if not militant atheist. Needless to say, given the area I have become a bit paranoid as of late. Another side note, no, I am not an atheist, my beliefs have me firmly in the agnostic camp. In fact, I pray quite frequently on the off chance God does exist and that one more person broadcasting on the supernatural hotline might cause him to reengage with his erstwhile hairless primate creations.

Returning to the main point sitting out Christmas, I have this vague worry that as I try to sleep during the day after coming from work that a Yule tide lynch mob might invade my house with them super gluing glittering tinsel and cheap wooden crosses all over my body instead of the ancient ritual of tarring and feathering. So, if I am not heard from again that will probably be the reason. That being said, I wish everyone Happy Holidays while I consider the possibility of  avoiding the coming lynch mod by joining the secular guerrilla underground which is fighting the endless War on Christmas.
Posted by Beach Bum at 5:29:00 PM

As someone who is slightly more religious than you, I suggest you read an article by Jeff Clarke, jeffkclarke.com, titled "2 Reasons Not to Keep Christ in Christmas." I hate gaudy Christmas decorations and am pretty sure Jesus feels the same way.

We have a Christmas flag outside, and that's the extent of our decorating. Well, we do have a goose AND a flamingo dressed as Santa inside the house (don't ask). But since we're planning to move to NC in a couple of months we decided that we didn't need to drag out all the Christmas stuff - so we could avoid packing more boxes than absolutely necessary.

But, really, whether we decorate each year is hit or miss. We ALWAYS spend Christmas at my dad's house, so some years it just seems like a waste of time. Other years we decorate everything, even the bathroom :)

P.S. I went to Kohl's last night - parked about four cars from the entrance, spent about 30 minutes hemming & hawing over what ridiculous thing to get some male friends (a whoopee cushion, for one), and got out of there in around an hour. Woot!

A friend of mine puts up about five or six Christmas trees in her house. My opinion on this is, "Ain't nobody got time for that."

We do have a tree and a few other decorations around the house. And while I love Christmas music and Christmas movies and Christmas food, etc., we've never decorated the outside of our house. I wonder if some people in the neighborhood thought we were Jewish. Ha! This year we took the lazy man's approach to decorating outside: we bought one of those lights you point at the house and little stars are all over your house (I think they are called "star shower"). Great invention!

Hope you can enjoy some peaceful and quiet days with your family!

Have you tried looking Middle Eastern?

That works for me. No one really thinks much of a "foreign-looking" person who does things that come off as slightly outsider or eccentric.

Seriously. It's like a get out of jail free card.

If you're in a city. Probably not in rural areas.

Hope you had a great holiday even if you didn't light up the outside of your house!