The Book of Joe- A Parrothead Book Review 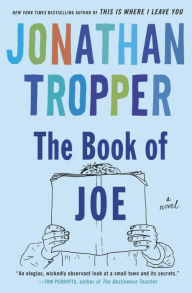 It's a curious situation when you begin to hate one of your favorite authors, but that is the position I find myself. The author in question is Jonathon Tropper and the reason he is irritating the living shit out of me is because I have just about finished reading all his published novels. For me it started with his book, This is Where I Leave You, which was turned into an excellent movie starring Justin Bateman and Jane Fonda to name a few. The rest followed in rapid succession leaving me with just with Plan B, after having just very recently finishing The Book of Joe.

For me, one of the things that makes Tropper's works so interesting is that they deal with a male main character who is loaded with complex personal issues. In fact, I read a review once that called his stuff “male chick lit” because his main characters are usually so overloaded with emotional problems that prohibited them from having successful or long-term relationships with other people. Even with the main characters almost drowning in a sea made up of horrible past events and bad decisions, Tropper's sense of humor gives his creations a humanity that I would hope everyone could relate to directly. That is the case with Joe Goffman, the main character of The Book of Joe.

Joe Goffman was born and raised in what many would call an idyllic small Connecticut town literally dominated by a winning high school basketball and the coach that leads it. The first, and relatively minor, of Joe's problems though is that he failed to make the cut to join the town's famous basketball team while is father and older brother did and become part of its long winning history. By this sports obsessed town's logic, that automatically made Joe, and others suffering a similar fate, a bit of a loser.

Now throw in the fact that Joe's mom suffered from mental health issues that eventually resulted in her committing suicide years before and you have the penultimate event that shaped his life. The death of his mom leaves Joe to suffer alone while his father and brother, who have built a relationship on their respective basketball experiences, share their grief together. However, Joe is able to build a life for himself in the town through the help of Wayne, his best friend, who not only makes it on the acclaimed high school basketball team, but becomes its latest superstar.

Despite it all, Joe is a fairly normal teenager who spends much of his time when not in school dreaming of girls, working in his father's factory, and hanging out with Wayne. This is when a new character, Sammy, enters the story becoming friends with Joe and Wayne. Sammy is an extremely flamboyant kid who worships the music of Bruce Springsteen and has a drop dead gorgeous mom who is often the center of Joe's teenage fantasies. Mostly unbeknownst to Joe, over time his two best friends become involved with each other, which is a problem for a small town that bases its existence on the idea of the sports-loving, heterosexual macho male. What made Wayne and Sammy's relationship something Joe chose to ignore was him becoming involved with a girl named Carly, who filled the void left in Joe that had existed since the death of his mom and his father and brother became engulfed in their mutual interests.

Despite Joe's emotionally dead father and brother, various town bullies, and a marginally sadistic basketball coach things are going good for him, that is until Sammy and Wayne's relationship becomes public. As you might expect for such a town, nearly no one is able to accept that the star of the basketball team is in a homosexual relationship with a newcomer to town who everyone pegged as weird from the get go. Events eventually force Wayne to flee leaving Sammy to suffer the blunt of the town's persecution. Making matters worse, during this time Joe, caught up in his relationship with Carly, distances himself from Sammy to the point he commits suicide.

In the aftermath, Joe and Carly separately leave town after graduation to attend different colleges, more or less suspending their relationship. The Book of Joe begins years later with Joe Goffman a wildly successful author living in New York, whose first book was based on his friends, enemies, and events that lead up to Sammy committing suicide. Needless to say, Joe's book was not received well in his hometown since it painted many of the leaders of the community in a very unflattering light. Pouring more fuel on an already burning fire of resentment and outright hatred, Joe's hometown then has to suffer through the indignities of having their prodigal son's novel turned into a movie that was very successful.

For Joe, his hometown's resentment is something he takes in stride until he receives a phone call from his mostly estranged brother saying their father has suffered a major stroke. After years of self-imposed exile, the decision to go back home is a tough one for Joe. Along the way he has frankly become a self centered prick purposely causing every relationship in his life to self-destruct once things become to serious. This includes even a brief resumption of his love affair with Carly, who spent some time living in New York herself after college. But even when everything says for him to continue his usual practices, Joe gets in his expensive car and goes home knowing he will not receive a warm welcome.

Returning home means reuniting with both Wayne and Carly, but not happily since the years have taken the toll on both of them as well. Wayne is suffering through the last stages of AIDS and Carly is nursing deep wounds after divorcing a physically abusive husband, as well as a hefty dose of resentment towards Joe. Despite everything I have written, I have given nothing away of the story since it is about coming to terms with a bad childhood and moving beyond it.

As the chapters unfold, Joe learns that his crappy childhood and unhappy adult life is matched by the misery his father dealt with after the death of his wife and that his brother's perfect life is a mirage that could evaporate in a second. But it is how Joe deals with the looming death of Wayne that really pulled me into that world. Even though he fights it at every turn, Joe is forced to grow, to the point he faces the mistakes he made with everyone, including Carly who he never really stopped loving.

What makes Tropper's book special for me is that he treats men as real thinking creatures, filled with numerous and maybe fatal flaws. But Tropper does leave his male characters room to make the right choices if they can move beyond whatever hurt they are dealing with. As you might be able to expect, I literally loved this book and it will definitely read it again in the future. I highly recommend The Book of Joe and hope it anyone who reads it from my review likes it as much as me. Now if only Tropper will publish some more novels before I finish Plan B.
Posted by Beach Bum at 2:45:00 PM

Only rarely have I even heard of the authors and books you review. But I usually make note of the titles.

Thanks for not giving away the endings!

I remember seeing the trailer for This is Where I Leave You. I wanted to see the movie, but never got around to it. You know how it goes. I'll have to check Amazon Prime.

The Book of Joe sounds interesting, too. Wonder if they will make it into a movie as well.

This sounds interesting! I'll add it to my wish list.

I have the same feeling of loss every time I finish a Louise Penny book - in my head I sound like Captain Jack Sparrow - why is there never any rum! Ha!