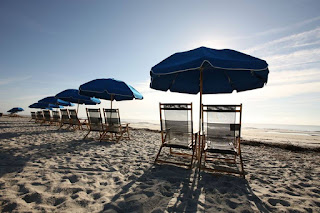 The clouds, all pure white and fluffy like cotton candy gave a much needed contrast to the baby blue color of the sky above Hilton Head, South Carolina. Truthfully, there was a bit of the surreal with the picture perfect nature of the sky. The fluffy clouds seemed too beautifully plump and organized. Someone a little too involved with technology wouldn't be wrong to think it all might be a computer simulation. At least that was what I thought reclining in my beach chair.

Where things went off kilter, giving a much needed boost to mundane reality was the lack of a real breeze and the blistering hot temperature. If reality was just a computer simulation, our god-like programmers could have coded in at least a refreshing breeze and enough surf to supply the sound of small waves crashing onto the shore. Waking from a fitful nap in my beach chair, I got up and repositioned it to get back under the shade of the umbrella that my wife and I rented that morning. Just for clarification, the beach chair was a rental as well. Its wood frame possessing a brown patina from what had to been the sweat of countless tourists who used it before me. The nylon mesh used for the backrest and seat obviously brand new or close to it.

My wife, who upon our arrival at the beach had taken the chair beside mine was nowhere to be seen. Being the early afternoon, it was easy to assume that she had returned to the beach house to get lunch at the small bar and grill located there. While not really hungry, given the crowded nature of the beach house, I realized it was prudent for me to pack things up and head in so I could order something myself without having to wait so long it became my dinner.

Taking a moment to survey my surroundings, the beach had long since become packed with fellow tourists all clamoring for their share of the sun and ocean. It was a huge gathering of all ages and apparent economic castes. Being South Carolina, the one thing glaringly obvious in its absence was any other ethnic group. Given the amount of pale white skin being exposed to the harsh ultraviolet rays of the sun, I figure a couple of hundred dermatologists will easily get their kids through college treating stupid Caucasians in the coming years.

Without wasting anymore time, I gathered up my backpack and sandals leaving the shade of the umbrella and the much cooler sand under it. For about half a second, I considered putting on my sandals but figured that being raised on the coast and having endured the hot beach sand since my childhood, I didn't need the protection.

The distance from my rented umbrella refuge to the steps leading up to the beach house and its protective shade had to be about forty feet. Just a few steps into my walk it was easy to figure out I had significantly overestimated my ability to withstand the current temperature of the sand beneath my feet. Honestly, I can't decided if whether I was just mistaken on having walked through similar hot sand, or that years away from prolonged and regular exposure had reduced my ability withstand the temperature. But the one certainty I can relate was that the bottoms of my feet were being cooked.

An old beach trick is that in such circumstances to get some relief a person digs their feet underneath the sand where the temperature is cooler. The technique worked up until the loose sand became hard packed and I again had to walk on the surface. This is where things start to get ridiculous but unfortunately true.

Before my nap underneath the beach umbrella a fellow group of tourists setup their own beach tent in front of my wife and me. During the course of the morning both my wife and I had some minor conversations with them that never went much beyond the exchange of names, our hometowns and professions, and how much we all love Hilton Head.

Just as I stepped on the hard pack sand with it beginning to cook my feet again, I noticed one of the ladies in that group leaving the beach house walkway coming towards me. She was a young thirty-something wearing a dark green bikini with the bottom portion of her swimwear being damn close to a thong. Legalistic niceties not withstanding, the line where a bikini bottom becomes a thong I have no idea but the difference can't be all that much. But when you combined this lady's body with her brown hair and graceful walk I defy most men not to act like nervous teenagers.

Let's get this out of the way before going any further. Yes, I noticed what she and the four other ladies in that group were wearing! I'm a heterosexual guy dammit, and one with enough sense not to do anything disastrously stupid that might wreck my marriage or bring about a lawsuit. All told, that puts me ahead of numerous politicians, celebrities, and rich television preachers. I have long since reached the age where I harbor no illusions about my looks or ability to attract other women. More importantly my wife is a lawyer, a damn good one, and if I did suffer from some delusion of being a “player” she would have my balls hanging from her car's rear view mirror before the ink dried on the divorce papers.

Still though, some small remnant of masculine self respect wasn't going to allow me to panic and fall all over myself to put on my sandals before my feet started smoking. So guess what I did?

Gathering all my mental and physical strength, I continued walking across the hot sand ignoring the blistering pain coming from my feet. Internally, I was counting the seconds until I passed this lady and could run up to the beach house walkway.

“My God,” this lady said to me as we passed, “isn't the sand burning your feet? I couldn't even leave the shade without putting on my flip flops.”

“Naw,” I replied nonchalantly deciding to go for broke and really pile on the bullshit. “I was raised on the coast and lived there most of my life. I've walked through hotter sand.”

We passed each other without saying another word. Being a crappy but typical male, I did suffer the heat a second or two more to turn around and admire the view- yes the lady, not the beach- one last time. That's when the pain really decided to kick in requiring that I run the last ten to twenty feet to where the beach house walkway started. Actually, I jumped the last foot or two trying to land on a part of the walkway that was shaded by the overhanging limbs of a tree.

Were my antics juvenile? Very much and while the middle-aged guy feels some shame the twenty-something version of me doesn't have a problem with it. Better still, no one saw my panicked dash then desperate jump to keep my feet from truly being burned. All things considered, I'm calling the encounter an overall win.
Posted by Beach Bum at 8:39:00 AM

Hahaha, you're too funny.

I used to run around barefoot all day as a kid, growing up on a farm. Now I'm scared of stepping on glass or something.