Waiting is the Worst Part 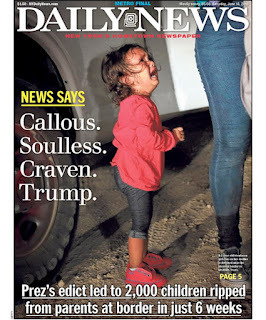 Several months ago, a Canadian guy I know from Facebook posted a question wanting to know which American president was worse, George W. Bush or Trump. His personal assumption was that George W. could still claim the title since he had spent a trillion dollars on the Iraq War and had approved the practices of torture to obtain information from suspected terrorists and mass Orwell-like surveillance on the general public. Being Canadian safely ensconced in the bosom of top rate government healthcare and a far more rational and intelligent population, he is totally cutoff from the facts here in this cauldron of seething fear and rage that is the United States.

True, the current occupant of the White House hasn't gotten around to launching a totally needless but self-serving war that wrecked the political stability of the good chunk of the planet and destroyed literally millions of lives both overseas and here at home. Well, at least not yet, and I mean every word of that short statement. Trump's need for adulation and glory is a dangerous combination and when joined with his saber rattling on Iran, a favorite boogeyman for the clash of civilizations types and the Israeli government, anything is possible. Despite the recent love fest meeting between the narcissistic wonder and the little squirt from North Korea, we are in no way out of the woods in that region.

What Trump has done that in my opinion makes him so dangerous as to change my perceptions of George W. to the point he is almost acceptable is to eat away at the basic foundations of constitutional government and the very stability of the country. Trump is desperate to begin persecution of his political enemies and anyone else that doesn't measure up to his definition of loyalty. Personally, I despise the racist Kebbler elf now running the Justice Department, his policies on marijuana and immigrants are at the very minimum backwards and self defeating for the former and criminal on the latter. The only thing good I can say about Jeff Sessions is that he recused himself from the investigation into Russian interference on the election and has resisted Trump's insistence that he do something to get rid of Mueller.

Civility, a tough concept for Americans in the best of times, has taken a huge hit since Trump has risen to national political prominence. The modern Republican Party, never a bastion of progressive thought when it comes to promoting equality now has admitted neo-Nazis and white supremacists running for elected office. There is only one reason why such individuals haven't been expunged on national television by the Republicans. And if you didn't automatically think of the name of the person who is letting the party of Lincoln slip into fascism you really need to get a grip. 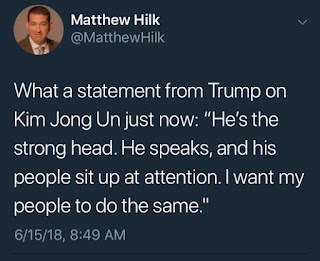 Equally disturbing is how numerous Republicans on social media are saying things worthy of not just the propaganda arm of an authoritarian country, but outright totalitarian police-states. Trump recently said to a Fox and Friends moron that he wanted Americans to sit up for him the same way the North Koreans do for the Kim Jong-un. Another instance involves a Republican party official that recently tweeted we should all get with the Trump program, or else. Not an exact quote by any means but close enough to express her sentiment. What exactly the “or else” means is anyone's guess but I have heard it repeated many times by other Trump supporting morons.

The situation that has sent me into spasms of anger and bewilderment is how Trump is now separating children from their parents or guardians at the border. Yes, these people are trying to enter the country illegally but they are still human beings and should be treated with respect and compassion.

In just over a month almost two-thousand children have been separated from their parents and housed in conditions that at best approach that of dog-kennels or even something far worse. If you've read a little history think back to the Japanese interment camps of WW2 and how they were just thinly disguised concentration camps. Adding another dose of inhumanity is how Trump is using these kids as bargaining chips to get his wall along the Mexican border. He blames the Democrats for his own racist and xenophobic actions. Pretty much the same thing as an abusive husband blaming his wife and kids for the beatings he gives them.

Frankly, I'm ashamed of being an American right now. Far more than during the Bush years when you had Cheney prowling the halls of government with his Sauron-like smirk. If the United States hasn't fallen into the abyss we're damn near the tipping point. Now if my words upset any super patriotic dipshits, start a crowd sourced fundraiser and buy me and my family a Canadian, Australian, or New Zealand citizenship. I'll gladly unass this shithole and watch as you all go into societal nuclear meltdown from a safe distance.

As for Democrats be they “liberal” or “progressive”, I honestly blame you lazy and petty fuckers for the overall situation. I'm talking about the apathetic shits who couldn't be bothered to vote despite the fact that they realized Trump was a monster. And I have a special anger-borderline hatred- for the “voting for the lesser of two evils is still voting for evil” crowd. God help me, I think more of the right-wing fanatics than you guys and gals. At least the right-wingers have enough sense not to cut their own throats.

As of this writing, summer hasn't even begun yet and I feel myself longing for November. Either the assorted Democrats will pull their heads out of their asses and take back at least the House of Representatives, or Trump will be given another blank check to remold the government and break the Republic. At least the waiting and uncertainty will be over. 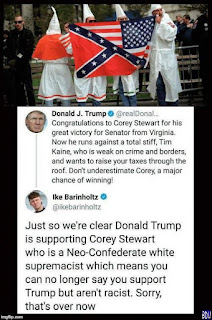 Email ThisBlogThis!Share to TwitterShare to FacebookShare to Pinterest
Labels: essay, I give up, nightmare future, Politics, Social Commentary, Social Criticism

I'm with you regarding blaming the Left along with the Right. But I would just include the whole population of the US who can't be bothered to vote. Only six states had a better than 50% voter turnout in 2016. We have what we deserve. Maybe the limp dicks on the Left will get off their ass this election coming up. I won't hold my breath.

But I have to say I strongly disagree with you about having any respect for Republican leadership whatsoever. They are the spineless scum of the Earth in my opinion. And BTW - comparing Bush to Trump is apples and oranges. But pressed to the mat, I am way more afraid of Trump than I was of Bush.

The scariest thing, to me, is the fact that openly white supremacists are running for office all over. Have we not learned anything from the past?

MRMacrum: Oh no my friend, you misread that portion of my post. I don't have any respect for Bush! I pretty much said the same thing you did in the second paragraph of your comment.

I wrote: "...to change my perceptions of George W. to the point he is almost acceptable..."

Pixel: Apparently not, but white folks here in America have never been that smart when it comes to history.

Beach Bum, I know you and I are on the same page, but the line I was referring to was in the second to last paragraph.

God help me, I think more of the right-wing fanatics than you guys and gals. At least the right-wingers have enough sense not to cut their own throats.

I am at the point I won't even give them this inch. Though I think the Left needs to field some serious attack dogs and not sit around wringing their hands.

The whole situation is just horrifying and maddening. I'm still waiting on someone to poke me & tell me to wake up. Sigh.