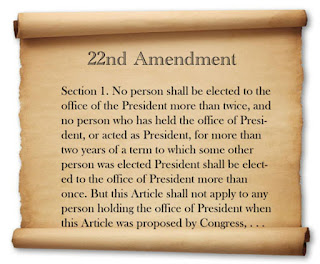 Way back in 1946 when Republicans in congress weren't insane sycophants they actually proposed a sensible and common sense amendment to the Constitution. That anyone running for president be limited to two elected term in office. See on April 12, 1945 only eight-two days after Franklin Roosevelt's fourth inauguration as president of the United States he passed away making Harry Truman the new commander-in-chief. For the first time since since March 4, 1933 somebody other than Franklin Roosevelt was president of the United States. After the midterm elections of 1946, Republicans took control of both houses of Congress and rightly felt anyone having that much power for so long was a really bad idea.

To say FDR's leadership through both the Great Depression and then most of the Second World War was key to the survival of the country cannot be overstated. But looking at the situation strictly through the fact that power corrupts and absolute power corrupts absolutely, FDR's four terms was putting the nation into extremely dangerous territory. For that reason, the Twenty-Second Amendment was quickly added to the United States Constitution limiting future presidents to two elected terms.

While the Founding Fathers, Alexander Hamilton and James Madison supported the idea of a lifetime term for anyone being elected president, thankfully that issue was sidestepped with George Washington leaving office at the end of his second administration. Despite his numerous personal faults, Thomas Jefferson went farther by writing half-way through his own second term:

If some termination to the services of the chief magistrate be not fixed by the Constitution, or supplied by practice, his office, nominally for years, will in fact, become for life; and history shows how easily that degenerates into an inheritance.

Curiously enough, back in 1872 Republicans did discuss the idea of running Ulysses Grant for a third term but negative public opinion and opposition from members of congress killed that idea. And Teddy Roosevelt did run for a third term as president, but in the “Bull Moose Party” but his efforts only helped Woodrow Wilson win the office.

More recently, I remember Bubba Clinton waxing philosophically at the end of his second term about how it might be okay if a former president came back to the office after something of a break. At the time my politics was considerably different and I remember how my skin crawled listening to him justify such a position. Being completely honest here, my skin still crawls at the idea of anyone being president past the mandatory limit of two terms, it doesn't matter whether they be Republican or Democrat. And yes, I'm open to the idea of extending term limits to those serving in Congress. Adding further fuel to my anti-establishment fire, I have strong concerns for political family dynasties, whether their last names be Kennedy, Clinton, Bush, or anyone else.

This brings me to Trump, no I still refuse to put the term “president” in front of his name. What more can I write about the amoral individual currently living in the White House I haven't already posted. As you might be able to guess, it's about how he likes to “joke” about staying in office past the 2024 Constitutional limit.

It was at Trump'sMar-a-Lago's resort where he said:

“He’s now president for life. President for life,” Trump told GOP donors in the Grand Ballroom. “No, he’s great. And look, he was able to do that. I think it’s great. Maybe we’ll have to give that a shot some day.”

You'd have to be blind not to see how Trump wants to dominate everything within his grasp. For proof of this matter just lookup his positively gushing words of praise for any of the authoritarian dictators I listed above. Yes, previous American presidents have cozied up to dictators, many with considerable blood on their hands, but none have ever spoken openly about copying their unlimited time in office. Trump's words towards the free press and the independent judiciary also speak volumes about his true nature. That anyone who opposes him is a danger.

See the problem with Trump joking that the United States might copy China's move toward a president-for-life is that history has shown such inspiring dictators like gauge how the public might react if such a move was put forth seriously. In the past such as President Grant and FDR, public opinion short-circuited the idea for the former and any future reoccurrence like the latter is now formally prohibited by the Twenty-Second Amendment.

We live in different times now, more to the point Trump supporters now act like members of a deranged cult than a populist political movement. Yes, if there are any conservatives reading this essay I can already see the sneer on your faces along with feeling the rage bubbling through your minds. But see President Obama hadn't taken office yet back in the first couple of weeks of January 2009 and yet the TEA party movement magically appeared complaining about the deficit the federal government was running and that it was his fault. The entire time Obama was in office Republicans blamed him for over spending even though George W. Bush inherited a budget surplus from Clinton but had a tax cut passed that lead to the federal deficit doubling under his two terms. Yes, Obama had huge budget deficits during his time in office, but they were greatly reduced under his watch.

What makes the situation funny though is that now since Trump has his own tax cut passed the federal deficit will again be running over a trillion a year. Surprisingly though Republicans are no long gnashing their teeth over Trump reigniting the budgetary nightmare of overspending.

While seeing Trump impeached and then convicted by congress before 2020 would be personally awesome, the actual chances of that happening are quite slim. Sorry my fellow Democrats, even with the indictments, guilty pleas, and convictions achieved by the Mueller investigation I firmly believe Trump has committed crimes worthy of being removed from the White House, but it is unlikely to happen. Even if a “Blue Tsunami” of Democrats are elected in the 2018 midterms, getting the 67 votes in the United States Senate to convict Trump is damn near impossible. It would mean Republicans joining Democrats to convict Trump and they are not going to defy their base.

The Trump Cult is firmly established and will be with him no matter how many American jobs he promised to protect go overseas or destroys because of his desire to wreck accepted trading agreements. He is the epitome of the rage semi-literate white folks are now expressing. So unless there is a huge change in the mood of the unwashed, rage-filled masses, Trump will remain in office until 2020.

But what happens if Trump is reelected in 2020, something that is quite possible if the economy stays within acceptable parameters? Then there is also the real and depressing chance that Democrats will again decided to engage in an ideological civil war in 2020 sending the disaffected to third parties or just staying home on election day.

To say Trump having a second term in office is a nightmare akin to nuclear war or global pandemic is an understatement. His Supreme Court picks would all be loyalists to him personally along with any lower court judges. His undermining of environmental regulations and treatment of immigrants already borders on the fascistic, I can't imagine what his actions would be during a second term.

His comments about “fake news” and jailing reporters who write things he doesn't like is another level of horrific. I have personally felt uncomfortable overhearing the casual conversations of Trump supporters and what they would like to do to those who oppose their savior. A second term would only embolden such individuals, to the point political violence would become a certainty in my opinion.

Okay, you might have already guessed my final point. If the worst case scenario happens and Trump gets a second term, I have a strong suspicion that his casual disregard for political norms and American law itself will extend to running for a third term. You might think I'm overstating his remarks or his open admiration for dictators but can you honestly see the majority of Republicans standing up to him and saying no? The current Speaker of the House, the most powerful man in congress, Paul Ryan is retiring from politics but he has never shown an iota of courage towards Trump, I simply cannot see any Republican who might replace him being any better.

Normally I'd say we have a better chance of one of his kids running to replace him in 2024. They have clearly inherited his same narcissistic personality traits and Ivanka has already mentioned she has political ambitions. But I do not for a minute believe Trump's “jokes” about staying in power for life are attempts at humor. He's clearly attracted to the idea because it appeals to his ego. Given how our politics have eroded and that most of us refuse to do the work required to keep a democracy healthy I believe Trump just might try it. You do not want to know whether or not I believe he could succeed.
Posted by Beach Bum at 3:01:00 PM

The Bug: If the Democrats do not take the House of Representatives in the upcoming midterms, it might be time to start thinking about leaving the country. At the very least moving to California or the two Pacific Northwest states.

Unless I am greatly surprised the Democrats will not take the senate since they are defending too many seats in purple or red states. Everything hinges on them taking the House, but a recent poll suggests the advantage we had in motivation has largely disappeared.

What The Bug said!