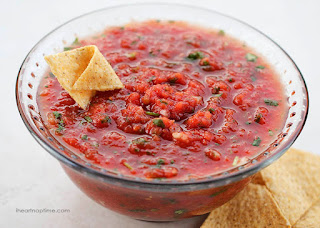 Recently my wife laid down the law and more or less forbid me from doing the milk and bread purchase runs at the really expensive and ultra trendy grocery store in our area. While the milk and bread are only slightly more expensive, what really sends her into orbit powered on female frustration is throw in a few other items, like the fancy beer I like or any of a couple of dozen other common foods and the final checkout tally can get excessive. And just to keep the peace, and because she was correct on her assessment about the prices being out of the ordinary, I agreed to avoid the place.

The trouble though is that some days I just can't stomach the idea of walking through the cathedral-like Walmart just to buy milk, bread, and maybe one or two other items. Call it a form of simple snobbery or the fact that the ultra trendy grocery store has better customer service, a couple of days ago I defied my lovely spouse and defiantly walked into that forbidden den of upper middle class tastes.

It took me no more than ten minutes to grab two gallons of milk, a couple of loafs of bread, and spend a couple of moments staring longingly at the incredible beer selection before I made it to the manned checkout. Similar excursions into Walmart take almost double the time since it's so much larger and you have to dodge Mary Lou and Joe Sixpack hustling to restock shelves under the watchful eyes of nervous, penny pinching management.

That particular morning at the expensive and trendy grocery store I was in luck. Ahead of me at the checkout was an attractive thirty-something suburban housewife who had recently finished her workout at the equally trendy gym/yoga center just a few doors down. How do I know this blonde lady with the tussled hair and firm booty had just finished some form of workout? Well, because she was still wearing her clingy exercise outfit which made it clear her membership to that facility was not going unused.

Besides her appealing outfit what I noticed most about this lady was the urgency in her purchase and the conversation she was having with the checkout person. See, after catching just a few statements I understood that one of her kids was having an elementary school party and she had to rush home and make something from scratch. Given the near panicked tone of her voice, if this poor stressed out denizen of suburbia wasn't already on anxiety medication, she was surely just a couple of years away from a permanent prescription. Instead I will now relate how I was once forced into a similar situation but for the most part said screw it and still came out looking good in front of all the mindless middle class drones.

Years ago when my daughter was in the third grade my wife and I got a message from her teacher saying that the class was having a party for some reason I have long forgotten. What the teacher wanted the parents to do was supply either food and/or party supplies for the event. Now the problem with this type of school event is that things have evolved beyond simple cookies, cupcakes, and juice boxes. Middle class suburban existence has bred literally millions of people who think they are unrecognized culinary wizards who make a point of supplying these types of events with fancy foods that take time and more than a little bit of talent to prepare. This puts those of us still in the cookie and juice box frame of mind at a huge disadvantage.. While I fully support public school teachers and understand they have a damn near impossible job, many of us outside the education field are stressed for time and energy ourselves.

This is where my wife returns to the story. She is a tax attorney and prone to exceedingly busy stretches of time at work. She also happens to be one of those people who loves to play in the kitchen and the upcoming event in our daughter's class was just the excuse she needed to get all culinary. One of the food items the teacher wanted was "fresh salsa" and my wife having her own personal recipe was overwhelmed with the desire to show it off. The trouble was that something happened at work the day before the event forcing her to lay the responsibility for supplying the class with her special salsa on me.

Truthfully, the recipe wasn't all that complicated, except for the fact that it would require me hand chopping a lot of the ingredients, which I wasn't in the mood to even begin. And to be completely honest, I felt homemade salsa for third graders was ridiculous, everyone going the homemade route was doing it to impress the parents who would be attending the party, not the kids.

After thinking about the situation for awhile I came up with a plan and made the required run to the grocery store to pick up the needed fresh ingredients. I also bought a couple of jars of some no-name brand salsa. Understand my wife's salsa doesn't look like any store brand since she doesn't totally chop up the tomatoes giving it an extra-chunky appearance. So, all I did was carve up the tomatoes to about the same size and along with throwing in a few of the fresh ingredients mixed in the two jars of the no-name brand and stuck it in the refrigerator for the next day.

Since the bottom had fallen out of some project at my wife's work she wasn't suppose to make it to the party. The word she had passed to me was that nothing would return to normal until the proverbial fan was taken apart and the poop cleaned from the blades. But thirty minutes into the party she walks in the door and heads straight to the big bowl that supposedly contained her special homemade salsa.

To this day one of the biggest differences between my wife and me is that she wants to fit in with the overall suburban hive mind. Where as I literally dream of the day when we can move to a place where individuality is not thought of as a mental illness. Needless to say, she knows me and my general disdain for those we live among. For that reason her beeline to the salsa was to find out what kind of stunt I pulled on the unsuspecting proles. The first problem she had was that the salsa was a hit, most of it was already gone leaving just a couple of ounces from which she could decided what nefarious ploy I had attempted.

By that time the only way she could decided was by tasting it herself. So after grabbing a couple of chips and dipping them into the bowl it was clear from the look on her face that she knew I had pulled a fast one and gone store bought. Personally, I was trying not to laugh as the metaphorical dark, foreboding clouds began to gather above her head. I was in trouble and once home it was a certainty I was going to get a full verbal artillery barrage. It didn't matter that the damn bowl was almost empty, I had committed a culinary sacrilege akin to plagiarizing a college term paper.

What saved my sorry butt was not just the teacher commenting that she loved the salsa but two of the other mothers, both full fledged suburban witches, demanding to have the recipe. Something my lovely wife adamantly refused saying it was a family secret. See those two suburban witches were the queen bees of that third grade class besides being well off stay-at-home moms who loved to whine about their tough daily schedule. Which according to them consisted of morning tennis lessons with an absolute brute of an instructor, the inability to find a decent decorator for their new home remodeling project, and whether of not they should skip buying a new car that year because the next their favorite model was getting redesigned.

What drove my wife crazy though was how the two seemed to look down on the working moms associated with the class. That's probably the reason why my wife suddenly forgot about my little trick. Once home nothing was ever mentioned about me pulling a fast one with the salsa. But I know my wife took a nice chunk of satisfaction with the idea that the two uppity witches couldn't tell homemade salsa from cheap store bought stuff.

Cool! This really hit the spot for me, talking about salsa ... and I also like sweaty women after workouts, heh, heh, heh, heh, heh , as well as flesh and more! (animal instinct {:-) No, but I am really a big hot spicy fan, would have liked to try it. My personal tastes fall into the extreme hot category, been that way for decades. I told a friend over the weekend, who likes salsa she claims, to try some of my Ghost Pepper salsa (out of Austin), I put some on a chip and gave it to her, she damn near screamed, she was panting and asking for water, etc. It didnt even cross my mind at first, on how some folks react to ghost pepper stuff ... Oops ... sorry dear (I should have told her). Well, bottom line guy, it worked out good for you and your wife!

You are hilarious - I'm glad you didn't get in trouble. I grew cilantro one year & tried my hand at homemade salsa. It was a bust. I don't know what it was missing, but the next time I wanted salsa I bought a jar from the store..

"I literally dream of the day when we can move to a place where individuality is not thought of as a mental illness."

Heh, sometimes we gotta be content with being our own neighborhood if not universe.

What a great idea, throwing in some chunks of tomatoes into the store-bought salsa! Personally, I'm a big fan of Publix bakery cookies - everybody always likes those.

And I know what you mean about that grocery store (I stopped at the one next to the high school...what a wine department!!!). Have you been to Lidl yet?