The Beginning of a Long and Dirty War 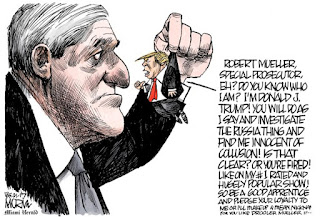 Understand, I have loathed Trump long before he considered running for political office. It was back in the 1990's when his reality television career was starting. From the very beginning something seemed "off" about the individual from what I felt was his unhealthy need for constant attention and adulation from others.

I use to be a fan of the performer who goes by the name Meat Loaf, until he was on Trump's reality show and looked at him with something akin to god-like worship one episode. It made my skin crawl in such a way I simply couldn't take Mr. Loaf or his music serious again.

So, it goes without saying that with the first indictments being issued to Paul Manafort and Rick Gates and George Papadopoulos  pleading guilty to making false statements to the FBI this morning, I'm feeling pretty damn good. All three individuals played key roles in gaming the election system so Trump could occupy the White House.

The only problem is that this is not the end to the Trump nightmare and everyone like me should understand that. We are all in for a long and very dirty war that will shake this country to its core. More importantly, Democrats like me should understand this will only harden those who belong to Trump's cult of personality. I know many such members personally, unfortunately, and they will follow him almost to death since he has become their Great White Hope.

What I am essentially saying is that rational Americans should write off the 30 to 33 percent of the country that would follow Trump off the side of a cliff. No logic or reason will dissuade them that he is a deluded narcissist without the barest understanding of how the world and the United States runs. More importantly, everyone should understand that in the coming days he could fire Mueller, at the very least, or start issuing blanket pardons to those indicted and anyone else, especially his family, who might be under investigation. In short, he would in all likelihood burn the country down if he felt it would save himself from criminal exposure.

Another factor we need to consider, when the leading world power is preoccupied with internal issues, outside forces have all through history used this time to try and redraw the world map to their advantage. Which I am sure Trump would greatly appreciate since it would allow him to possibly weasel out of these growing problems with the law.

We are in seriously dark and dangerous territory here folks.

Midterm elections are one year and seven days away – November 6, 2018. Vote. OUR lives depend on it.

Donna: Absolutely! The situation is a nightmare already, Democratic infighting could be the final push that brings down the country.

HOPEfully, our elected Democratic dudes and dudettes can take a lesson from the Lakota, Northern Cheyenne, and Arapaho's Battle of Greasy Grass. Together we stand, we win. We can go back to arguing amongst ourselves LATER.

"Cult of personality" describes it perfectly. Granted, to some extent, Bill Clinton and Barack Obama were, too - as shown by the fact that neither had any real coattails after they were gone. But it's reached a whole new level with Trump, wherein the message can change on a dime when there is a message, and no one seems to notice or care.

I look forward to Mueller continuing this way.

Donna: Never underestimate the ability of Democrats to snatch defeat from the jaws of victory.

Harry: Yes, the cult of personality does extend, in a limited way, to both Bill Clinton and Barrack Obama. In fact way back before the 2008 presidential election I became worried when some Obama voters seemed convinced that once in office he would solve the economic crisis at that time in one afternoon.

Frankly, I can't blame politicians for how idiotic some voters, in both parties, can act. They expect easy, comfortable answers to intractable problems.

It's only the beginning...but it's a start in the right direction.