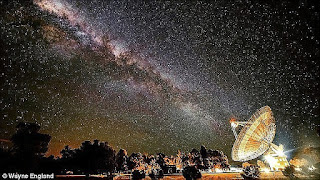 Not to get weird, because that ship sailed long ago, but as I was surfing the YouTube channels Sunday afternoon one of the guys I watch on a regular basis posted an interesting and out of the blue video. Turns out that the giant Arecibo radio telescope has detected an "odd" signal that seems to be coming from Ross 128, a red dwarf star about 11 light-years away.


Abel Méndez, an astrobiologist from the University of Puerto Rico said the star was observed for ten minutes, during which time the signal was detected and that it seemed "almost periodic". Méndez admitted that the signal could have originated from a communications satellite, since they often transmit on the frequencies observed but that the radio burst was "very peculiar". The video you will find below does suggest that if the signal was from a communication satellite it would have to be quite a bit farther out from Earth than is normal.


My first thought after hearing that was the signal might be from a spy satellite. Over the last several decades the United States and the Soviet Union have launched numerous secret payloads into space and I've heard a lot of crazy theories that some of them are in weird orbits in an effort to go undetected. There is also a chance that the signal came from the star Ross 128 itself, since red dwarfs often produce massive flares.


Recent speculation about that habitability of red dwarf star systems tends run either hot or cold. On the plus side, those stars live far longer that our sun, thus allowing a lot of time for life and intelligence to evolve, but those massive flares probably sterilize any planets orbiting close enough to be in their Goldilocks zone. Whatever the case, the guys and gals at Arecibo will be trying to tune in on Ross 128 in an effort to pick the signal up again.

Email ThisBlogThis!Share to TwitterShare to FacebookShare to Pinterest
Labels: I Got Nothing, science, SETI, space

Lots of unexplained things--especially why aliens would want to show up in the Nevada desert.

Oh back then aliens were not as advanced. They crash landed in what looked like a huge soft landing pad to them.

Well, I'm glad someone is looking into this!

Sounds quite exciting great to find out

Sage: That one is easy to answer with one word: Vegas!

Migrating Spirit: The ET's were just drunk, like most guys doing a road trip.

Pixel: The signals are probably natural but if they are from aliens several huge questions have to be asked. Namely, if we have neighbors just 11 light-years away are they native to that star system or have they colonized it?

Marja: Its got me hoping.