The Last Thing You Should Consider 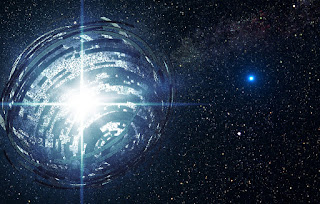 Idle Speculations on Alien Intelligence and the star KIC 8462852.

This is just a personal observation subject to error but as someone far more interested in the Search for Extraterrestrial Intelligence (SETI) than the average person I have noticed something over the last few years. While all the excellent and totally professional science guys and gals still say we are only now reaching the technological level that could allow us to gleam an artificial signal out of all the normal background static I sometimes detect a hint of uncertainty in their voices concerning their research.

Don't misunderstand me, I totally support SETI and do believe that our galaxy does host some number of intelligent, technological advanced alien species. The chief debate to me centers on just how many stars have planets that can spawn and then support for extended periods of time lifeforms that evolve into intelligent creatures. Current research suggests habitable planets are plentiful but whether or not the circumstances that allow intelligence to evolve and then survive are common is still a huge unknown.

For further, and sadly, just as needed clarification. NO, I do not put any stock in all the UFO reports and alien abduction stories that have made it to the popular media over the last fifty to sixty years. On the rare occasions I get to have an reasonable conversation about the possibility of intelligent alien life, someone nearly always chimes in about Roswell, Area 51, or some other tripe about UFO's and the government covering up their existence.

As much as I dream of manned interstellar flight being possible, right now it looks incredibly hard and so expensive it would take a truly prolonged global effort to pay for the project and build. We naked primates are still fighting over religion and whose nation is most special, the idea of us working together to cross the distance between stars is lubricious. Of course, a totally unexpected and out-of-left-field technological breakthrough could change the equation but that is just wishful thinking on my part. 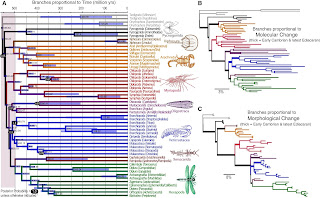 Getting back on point, it seems some of the SETI folks are getting a little worried. For the last twenty years or so we have been scanning huge swaths of the galaxy and millions of frequencies and except for periodic false alarms and the rare and mysterious burp that doesn't repeat, come up with nothing. This has lead some in the biological sciences to suggest that complex life might be quite rare. They point out that while Earth has been around for over 4 billion years it was only 542 million years ago during the Cambrian Explosion that complex life appeared in the fossil record. Before that, all the evidence suggests that life on this planet was limited to single-cell organisms. These “Rare Earth” types argue that there are a complex array of interlocking conditions required before life can move beyond simple organisms and that if you remove a few from the equation further development is stymied.

Even if some complex organisms on an alien world evolves into an intelligent species there is a whole host of different disasters that might drive them extinct before reaching the technological point where they can hope to make their presence known to the wider galaxy. The late, and great, Carl Sagan speculated that all intelligent species might go through a cultural adolescence where their moral and ethical development is outpaced by their technological abilities. In short, they might nuke themselves into oblivion over inconsequential things like religion, nationalistic bullshit, resources, or whose penis is bigger.

(Important side note: Let me go on the record to state I not just talking about us arrogant Americans. At least here in the United States many of us blow off this “Exceptionalism” bullshit. I frankly find Russians more obnoxious with their ethnic based belief that their shit doesn't stink which is made worse by the chip they perpetually carry on their shoulder. It also appears that the Chinese harbor grand ideas of taking charge of the world and get quite upset when everyone doesn't go along with what they consider promotes harmony, which they define as anything that advances their national interests.)

It was the author and astrophysicist David Brin who in his book Existence upped the ante on intelligent species survival by mentioning there are a multitude of cosmic booby traps just waiting to cause an extinction level event for the members of any unwary civilization. These traps ranged from the known threats of a major asteroid or comet impact to being too close to a star going supernova or a passing neutron star. He also included “man-made” disasters such as a genetically created pandemic, the release of nano-sized robots that consume all matter, to climate disaster, which might be the one that already has our name.

Despite the fact that I am a huge fan of Neil deGrasse Tyson and his buddy Bill Nye I highly disagree with their skepticism when it comes to talk about the near-term human colonization of Mars. They tend to think colonization requires a planet with a breathable atmosphere, and while that would be nice such worlds are in short supply in our solar system. I would much rather deal with domed or underground cities on Mars if it meant the survival of the human race in the face of some man-made extinction event.

Long story short, when you take into consideration all the possible disasters-- or filters-- awaiting to befall intelligent species not only do they need to damn near be saints but extremely lucky as well to survive much beyond our current technological level. None of this bodes well for us humans looking to find other intelligent life in our galaxy.

The last thing you should consider.

Just speaking for myself, I was quite happy to hear last week that researches have spotted a strange star that does something none of the science types have ever seen before. The star, KIC 8462852, located about 1400 lightyears away dims in way never seen in any of the other stars observed by the famous Kepler orbiting telescope.

The Kepler space observator was designed to monitor the brightness of stars and detect when a body, such as a planet passes in front. Since its launch, the Kepler spacecraft has detected over a thousand confirmed exoplanets with some believed to be close to the size of Earth and orbit in the habitable zone of their parent star where water could exist as a liquid.

In the case of KIC 8462852 what has everyone buzzing is that Kepler detected two massive dips in the brightness of the star roughly every 750 days. One dimming event blocked up to 15 percent of the star's brightness with a later event blocked up to 22 percent. These changes in brightness are consistent with many small masses orbiting the star in tight formation. One thing seems to be clear, that whatever is causing this bizarre event is not a planet. Something the size of our Jupiter would only block 1 percent of our star's light. Whatever is blocking the light of KIC 8462852 is covering half the width of the star.

The overwhelming possibility of what we are seeing is either a cloud of disintegrating comets, essentially a bunch of massive balls of ice and dirty involved in a cosmic-level traffic pileup. Or a recently captured asteroid field kind of like the one Han Solo had to navigate through to escape the clutches of Darth Vader in The Empire Strikes Back.

KIC 8462852 does have a close by stellar companion that might have stirred up the cloud of comets that surround all stars, sending them crashing inward and after 1400 years of its light traveling our way screw with H. sapien astronomers here on Earth desperate to make a first contact with aliens. And while we believe it to be an older star it's possible KIC 8462852 is actually young and still has a lot of primordial junk floating around it. For this one I guess the best analogy would be your average teenager's room. 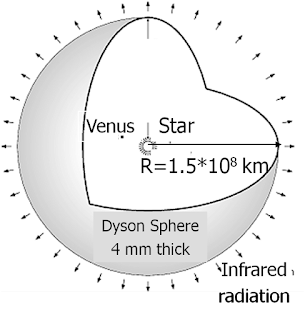 There is another possibility that is only barely mentioned in passing and only half seriously. What we might be seeing is evidence of an artificial construction called a Dyson Sphere. The idea being that stars put out a lot of free energy and that if an advanced race built a shell around it they could collect all that light and use it for some super advanced purpose.

Needless to say, I hope we have found evidence of an alien civilization that has somehow found a way to survive all the natural and self-inflicted wounds an uncaring universe can throw on an intelligent lifeform. I'm not looking for some event that knocks humanity out of its tried and true combination of ignorance and apathy. Just a flicker of some awareness that we are not alone in the universe could be enough to defer our appointment with extinction.

One final note, as of this writing the Allen Telescope Array is even now scanning KIC 8462852 for signs of artificially generated radio signals. No, I'm not optimistic but when you're playing this type of game patience is a vital element in this research.

For further reading see: Popular Science-Have We Just Detected Megastructures Built By Aliens Around A Distant Star.
Posted by Beach Bum at 11:49:00 AM

Interesting. I do believe there is live beyond our planet but as you say they just start to develop technology to be able to pick up signs and I even think it is by long not enough.
And than why would they ever be interested in us? There is not that much to learn from human species as we don't keep our planet clean and fight each other all the time

...patience is a vital element...yeah, it seems like a few hundred years of patience. I don't think we or our children will know - but maybe our great great grandchildren. However, I do think colonizing Mars is somewhat more possible - my youngest son would totally go for that trip (I told him he should wait until after I'm dead, LOL).

I have enough troubles and wondering if there is intelligent life out there is something that I leave up to other folks, like you! However, I do find that the possibilities makes for great Science Fiction. Have you read Lee Modesitt? Two of his books (Parafaith War and Ethos) deal with a religious society gone bad and then a secular one gone bad. Of course, sci-fi tends to imagine worlds that look a lot like us and instead of nations fighting, it is planets or galaxies (and maybe that is the only way the world would be united is a common enemy from out there.

Marja: What you mentioned might be the reason aliens haven't contacted us. They might think we're on the same level we think of ants.

Pixel: I actually quite surprised Elon Musk is so open about his desire to colonize Mars. I remember back in the 80's a scientist brought up the subject and was laughed out of the room.

Sage: I'll have to check out those books. As far as humanity uniting, yeah it would probably take some outside threat.